I’ve just been tidying up the front garden with my wee missus. To clarify, I mean Karen assisted me in the task of improving the aesthetic visage of le jardin de la maison Strachan; not that I’d used her as a substitute to secuteurs, a rake and a lawn edger!

Using my dad’s cordless hedge trimmer, I utilised my fledgling topiary skills to shape the bushes and hedges adorning our garden border. Despite being a newcomer to topiary, to my surprise I created hedge art of unexpected quality.

When I say unexpected quality, they didn’t come out as busts of comedians Vic Reeves and Bob Mortimer as I’d intended. However, through serendipity, I’m now the only man in East Leeds with topiary of a horse playing tennis, along with a carving of Norma Major (the wife of ex-UK Prime Minister John).

They might not have be intended, however these unforeseen pieces of topiary art really pleased me. After all, everyone has Reeves and Mortimer shaped hedges; no one has a sculpting of Norma Major (not even John). 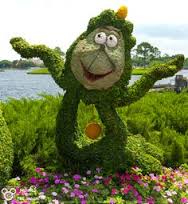 This accidental creation of an ex-PM’s wife gave me an idea for a future business of creating hedge sculptures of former UK First Lady’s. However, my fickle mind is currently torn as to whether there would be a market for them.

Do people really want a Mary Wilson shaped hebe? Would a euphorbia carved into a Cherie Blair bust be something that would float the boat of the chatting classes? Would a conifer designed as Ted Heath’s boat float the bust of former model, author and cheese connoisseur Katie Price?

I’d need to do some market research before I recklessly start a business that through lack of interest may be doomed from the start. I personally can’t understand why anyone wouldn’t want a Denis Thatcher hedge, but you cannot legislate for the UK public’s lack of taste.

That isn’t my only concern. I also need to address the fact I created the Norma Major shaped topiary more through luck than judgement; or indeed skill. So, say I try and sculpt a bay tree into Sam Cameron, there is no guarantee it won’t materialise as Vic Reeves or his Teesside sidekick.

At this point my fledgling, and pithily named, business ‘Strachan’s Former Prime Minister Spouse Topiary Sculptures & Son’ would be dead in the water; unless I can persuade my client that Vic or Bob were at one time married to Gordon Brown or Benjamin Disraeli.

Yes, there is definitely a great deal more thought needs to go into my business strategy, before I wantonly invest my nest egg into the hedge sculpting of UK First Lady’s. It would be profligate of me not to have a good idea of my demographic market……. However, I’d need to look up what demographic means first!……. And market!

Anyway, I best get off as my neighbour’s at the door complaining that the horse has just hit a tennis ball into his garden……. Those topiary equines are more bloody trouble than kids! 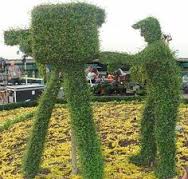