I’m sat outside writing this narrative, a parasol shielding me from the searing rays of the early afternoon Yorkshire sun. In an attempt to decrease my body temperature I’ve just had my third iced lolly of the day.

Karen is stood ironing beside me. I admire her unquenchable work ethic, however, I question whether she should be ironing bedding plants before she pots them. I think petunias, marigolds and lobelia respond more favourably to heat from the sun, as opposed to that generated by a Tefal steam iron (other iron manufacturers are available).

She looks happy though so I’ll keep my counsel. You never know, flattened annuals may have an aesthetic pleasing visage.

After all when next Marmite, the cat next door, jumped from the fence onto my busy lizzies last year it didn’t really detract from their overall beauty……. They were sore for a while mind you, but thankfully no cosmetic damage was done!

Karen’s just finished her ironing and is now undertaking a far more orthodox household chore…… She’s vacuuming the back lawn! 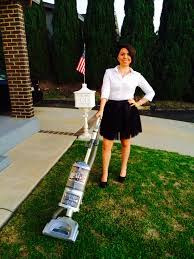 I wasn’t going to write a blog today. Writing outside isn’t that easy when the sun’s glare exhibits the intensity of something particularly intense.

The late East Anglian poet Fermal Undies once wrote the following well known prose about the power of the sun’s glare :-

The sun is intense

It wasn’t my favourite poem of his, however, it struck a chord with me and has had a special place in the ‘not often used’ section of my brain for many years. It’s stored next to happy Leeds Utd memories in the last ten years and Jeremy Kyle quotes.

Undies most esteemed poem which was sold to an Ipswich man for £3.50 at auction was:-

The cold is intense

Nevertheless, can you still lend me 50 pence?

Although, the structure and content of the two odes look similar, the former is described as superficial and lazy  by literary critics. Whilst the same judges deem the latter to be a masterpiece that exudes pith and is well worth £3.50.

What does each piece of prose really mean? What was Fermal Undies trying to tell us when he bestowed these sonnets to the literary world?

Personally, I don’t know what those short pieces of art mean. I’m no art critic and lack the literary skills to pick through the minutae to give an informed opinion.

What I will say though is that regardless of the weather Fermal Undies seemed to be constantly on the cadge!!

Another reason I wasn’t going to write a monologue today was my confidence took a hit following the receipt of the following note from the Grammar Police:- 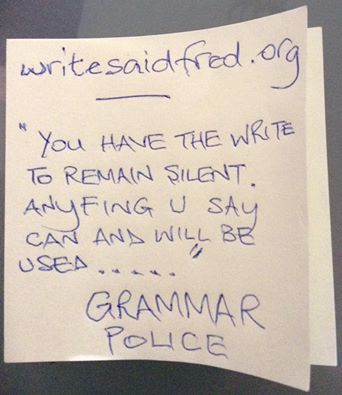 To close, my daughter Rachel advises me that currently lots of Facebook accounts are being hacked by people with untoward agendas.

My darling offspring also added that if mine is compromised she hopes the hacker has better bloody jokes!!!……. Whatever does she mean?!