A few hours after Cassius Clay defeated Sonny Liston in a first round knockout in May 1965, my brother Ian was born. The two events aren’t inextricably linked, however this minutiae of info sprung to mind yesterday on hearing of the sad death of Muhammad Ali (formerly Cassius Clay), at the age of 74.

It’s not the only thing our family has in common with the ‘Louisville Lip’, as my dad and him both made major conversions in the 1960s. Around the time Ali converted to Islam, my dad converted to North Sea Gas.

Like the heavyweight boxer, my dad also knew Harry Carpenter well. Although, admittedly it wasn’t the boxing commentator he was acquainted with, it was Harry Carpenter the butcher from Gateshead.

In a further coincidence, Ali wasn’t adverse to a good natter, which is the top interest listed on my mum’s curriculum vitae. So as you can see, although the boxing legend never crossed paths with my family there were some spooky links between us.

My first recollection of seeing Muhammad Ali was highlights of his first fight with Joe Frasier in 1971. I was an eight year old boy sat on the floor watching the small grainy monochrome picture emitting from the box in the far corner of the room….. This surprised us all, as it wasn’t the TV which was in the other corner.

Seriously, though, you could cut the atmosphere in the room with a knife; which was more than we could with Harry Carpenters sausages we had in front of us. 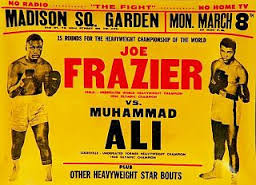 I didn’t recall this at the time, but I later learned the bout was dubbed the ‘Fight of The Century’. I beg to differ on this. It was a good scrap, but was it really any better than Leeds’ Norman Hunter and Derby striker Franny Lee’s fisticuffs on a mud covered Baseball Ground a year or so later?

The bout was broadcast to 35 foreign countries; promoters granted 760 press passes. That’s Ali/Frasier not Hunter/Lee, although that did entertain millions of ‘Match of the Day’ viewers that Saturday evening.

As a young boy in the 1970’s I loved Ali. He was always great value for money in and out of the ring. It seemed to me, he engaged his public around the world in the way no other sports personality had before or since.

I lost my interest in boxing when he retired. It moved into a multi belted pugilistic world where, although there has undoubtedly been some skilled advocates of the art, its greatest entertainer had gone. I felt all those years ago we’d never see anyone emulate his overall contribution to his sport. Nearly 40 years on, I feel I’ve yet to be proved wrong.

I can only conclude, I never really had a genuine affection for boxing. In all reality it was the larger than life Kentucky pugilist that I wanted to watch, in or out of the ring. He would always make his presence entertaining, be it with his boxing skill or with his tongue in cheek jousting with chat show hosts, broadcasters and fellow celebrities.

Like every sportsman you have a reasonably short shelf life, in particular boxing where the body takes some fearful punishment. Muhammad Ali’s retirement in 1981 was probably the biggest loss of a worldwide personality in any sport.

The comment ‘There will never be another.’ and word ‘Legend’ are dished out undeservedly at times. In Ali’s case both of the statements are undoubtedly true. 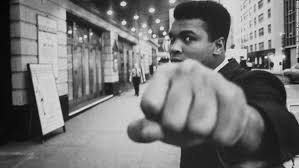