Last night I watched two Sky Arts recordings of live concerts by multi million album selling bands. They were both performed by British groups in two historic and cosmopolitan European capital cities. This isn’t a riddle by the way, I’m just building up the suspense!

The gigs were filled with brilliantly executed songs, accompanied by expensively designed stage and light shows, in the presence of packed audiences.

Despite quite liking both bands, they are by no means among my favourite artists. However, as I quite like some of their anthems and as the Samaritans were engaged, I decided to stay with the shows!

As I slumped watching on the sofa, one of the things that struck me was a hefty Christmas card that landed on my bonce!  After thorough crime scene investigation, I identified that this was due to a catastrophic Blu Tac binding failure, which resulted in the cards liberty from the emulsioned wall! …………I knew it would be folly to wall hang the anvil card sent by my mum and dad!

It was really refreshing, in these times of seemingly wall to wall dreadful news stories and general negativity, to see the delight of several thousand elated people watching their musical heroes perform live. 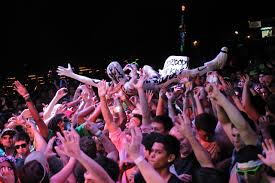 One of the gigs, in particular, was quite moving as it was recorded in 2012 at the Stade D’France in Paris. After the recent tragic events in the French capital, the poignancy of watching euphoric Parisians was not lost on me.

To some extent, though, the band and venue were irrelevant. It could just as easily been ‘Harry & The Shoehorns’ singing Where’s My Hat?! at Beeston Working Men’s Club. The gratifying element for me was to capture the audience’s euphoria; resultant from an individual(s) artistic creativity and performance.

Although it has to be said, if it had been ‘Harry & The Shoehorns’ at Beeston Working Men’s Club not all of the crowd would have been so deliriously happy. Old Ted, who sits with his stout, in the corner is a right miserable bugger, who would have no doubt complained!

I couldn’t find a picture of an old man with a stout, so here’s one (below) of a young lass with a stoat! 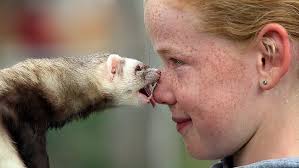 Anyone who creates any form of art to a high standard is truly blessed. It’s a gift that can’t be taught. You can learn to be a good musician from adequate tutorage and practise, but if you are not creative enough to write a decent tune/lyric you’re destined to play other peoples compositions.

In my opinion, it’s a similar scenario with writing. One may command an excellent knowledge of the English language, but if you’re not creative you will be predominantly transcribing other peoples work. You can teach a creative person to improve grammatically but not vice versa.

Viewing these two concerts not only highlighted to me the crowd euphoria created from art. It also made me focus on the buzz it must give an artist/group seeing ‘their baby’ bringing that level of joy!

It must be rewarding and gratifying knowing the results of your meandering and creative mind, along with the subsequent skills in its delivery, bring fulfilment to so many!

To turn a blank page of paper, staves or canvas into something tangible that touches someone’s life, even if only for a moment, must yield the creator a reward beyond simple material riches! …….. Especially if you get paid for it!

Anyway, enough of me rabbiting on, I’m off to re-attach that flipping anvil card that’s just fallen off again!! ……… Looks like I’m going to have to use significantly more Blu Tac! 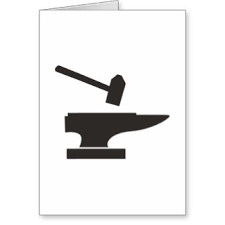 Well you stuck with that for a while (unlike the anvil card to the wall!) and I still didn’t reveal who the bands were, did I!! ……. First world problems eh!