Skip to content
By Gary StrachanMay 25, 2018Blogs family fiction humour parodyLeave a Comment on Have You Heard About……?!

Friday 25th May – At the moment, any free time I have seems to involve responding to GDPR emails. The senders of these mandatory communications include social media giants like Twitter, Facebook and Instagram, the entities whose distribution lists I reside upon, along with utility service providers.

Due to upcoming regulation changes, I’ve been inundated with requests to state my preferences into how my personal data is utilised. In one case I had to enrol on a brief online data protection e-learning course. The latter even contained a test at the end, where the attendee had to prove they’d acquired sufficient knowledge to maintain their working relationship with the sender.

I passed the test, although evidently the answer to question number 6 wasn’t ‘The Reverend Green in the conservatory with the lead piping’.

From my high level understanding, the General Data Protection Regulations (GDPR) is legislation aimed at allowing the public a greater say/understanding in how their company held personal information is secured. In particular the companies responsibility to ensure it doesn’t fall into the wrong hands, or unapproved third parties.

Sadly, the edict doesn’t cover verbal escalation of personal details from the likes of our estate gossip Mrs Gregdyke. For instance, this legislation won’t protect the lady from number 413 having her ‘water-works’ troubles spread to anyone who’s prepared to listen.

Also unprotected from Mrs G’s tittle-tattle, the young man (Mr X Box in flat 40) who has massive gambling debts. This a self-inflicted problem borne from multiple ill-conceived bets, such as betting his mate £50 that Mrs G wouldn’t know he had gambling debts!

If your inclined to litigate against your name being dragged through the mud, there’s slander laws to give some protection against the likes of Mrs Gregdyke. Obtaining proof and the cost of legal action, though, generally renders this option prohibitive.

Ordinarily, I avoid gossip like the plague. If somebody wants to tell me stuff about themselves that’s fine. However, I’ve no desire to become embroiled in a latter-day Cissie and Ada*** sketch, a scene where I join a neighbour judging other peoples deemed behavioural ‘flaws’. 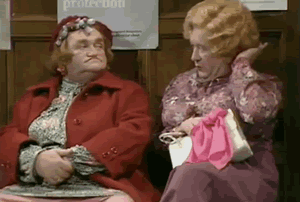 I’m acquainted with many victims of gossip (untrue in many cases) and have seen first hand the negative impact this supposedly harmless practise can have on an individuals demeanour.

When it comes to tittle-tattle, I personally hold the mantra of “He who is without sin cast the first stone.” If you want to judge me or my behaviour you better be a) whiter than white yourself, and b) have a full understanding of my side of events. If you fulfil both of that criteria feel free to fill your boots!…… Oh, and can I borrow your Aled Jones’ Greatest Hits CD?

There are far too many self-appointed paragons of virtue for my liking. Toxic, negative individuals with not one shred of the humanity. Those who, if GDPR existed for peddling gossip, would regularly succumb to a legislation breach.

Amongst my many ‘sins’, for which I hope one day to be redeemed by god, or at the very least Mrs Gregdyke, is regular use of the word flange in my narratives. My rap sheet also includes over-excitedly admonishing cats for defecating in my garden, along with banning Mrs G from hiding in my fridge to acquire further gossip fodder.

Over half a century of living and working in Leeds, Gateshead and London I’ve met hundreds of people. I can categorically state that, despite many of those being good hearted individuals, not one of them was without flaw.

Someone once said “Show me a man with no flaws, and I’ll show you a man who’s never lived.” I can’t recall who that someone was, needless to say the sentiment remains valid.

Incidentally, I’m unable to find reference to the above quote via online search engine, so I may have just inadvertently stumbled on a profound adage…… More by luck than judgement it has to be said!

Right, I best conclude this narrative. I need to go read the email I’ve just received from Mrs Gregdyke.