As a terrible hoarder, I have a regular requirement to create space in the ever-burgeoning drawers, cupboards and wardrobes of my humble West Yorkshire abode.

Ordinarily, it’s a token gesture by yours truly; paying lip service to a task I neither enjoy or desire to undertake. A chore riddled with difficult ‘life-changing’ decisions, such as the necessity of keeping a printed gas bill from 2003, or the benefits of holding onto loan documents for a car I’ve not owned since 1999.

On the most recent de-clutter I happened upon a Gateshead Fell Cricket Club (GFCC) annual report. A document produced for GFCC’s 1979 Annual General Meeting (AGM) to provide the cricketing, asset and financial health of the club. A journal created to allow club’s committee members (which included my father) to reflecting on the years performance and make informed decisions aimed at GFCC flourishing in 1980.

I’m unsure as to how this AGM document came into my possession, all I can surmise is that my old man must have given me it years ago.

On scouring the balance sheet, I was surprised there was no mention of insuring certain club members. A strategy designed to underpin bar profits should anything untoward happen to them.

I’m talking about a clutch of guys whose regular residence in the club’s bar ensured the 1st XI could afford wages for a professional cricketer. Men who quaffed copious amount of McEwan’s Best Scotch, bottles of Newcastle Brown Ale, along with McEwan’s Bitter. There was also a draught lager, but I’m unable to recollect it’s name, and from memory at that time wasn’t as popular with club members.

To clarify, McEwan’s Best Scotch isn’t whisky. Not living in the north east of England for over 30 years, I’ve no idea if that ale is even produced now. However, I do know that (as happened with an acquaintance) if you ask for a pint of Scotch in most areas of England they’ll assume you mean whisky. Consequently, that first impression you’ll create is that you’ve a quite severe drinking problem. 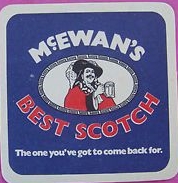 My old man never reached the upper-echelons of patrons who underpinned GFCC’s financial stability via Scottish & Newcastle’s finest ales. However, his imbibing in the club bar more than contributed towards the purchase of rollers, sightscreens, ground maintenance and cricket equipment.

As I pen these unreliable memories, I’ve not got that GFCC AGM yearly performance review to hand and am unable to recall the exact review details of the year 1979. From recollection, on the playing side the club was in a healthy position. The 1st and 2nd XIs enjoyed a steady if unremarkable season, the 3rd XI won a cup and the junior team (of whom I was a member) prevailed in two cup finals.

The report text spoke of the several juniors players who’d been selected for representative teams that year. Not to mention, 2nd XI captain Tony Tait receiving a special league award as the only player in Durham Senior League history to score a 50 whilst undergoing an outer body experience. The diminutive left-handed batsmen advocating that method of batting as “It hurts less when the ball hits you in the nuts!”

If memory serves me correct, the journal advised club finances at GFCC were stable as 1979 drew to a close. That being said, though, they weren’t flush enough to finance the proposed statue of Doug Hudson. Much to the 1st XI skipper’s chagrin, it was deemed an indulgence too far after spending a fortune on the Jimmy Devenport sightscreens.

I spent ages reading through that cricketing report. An hour where fond memories were evoked; including my conscious mind being visited by names of team-mates I’d not seen for three decades.

Unavoidably, while scouring these 12 pages of GFCC history in the last season of the 1970’s, I recollected the many times I’d spent there in the 1970’s/80’s with my recently passed father. At one time the whole family had an involvement at the club in one form or another. My dad on the committee, brother Ian as a player, sister Helen in charge of the scorebook and my mum part of the team of ladies who provided inter-innings teas.

In the intervening years I’ve lost touch with club members, however, I’ll always have a fondness for Gateshead Fell. So much so, I’d like to think now in 2018 that Tony Tait’s out-of-body batting record still stands. Not to mention, a hope Doug Hudson finally got his statue commissioned; an innovative work of sculptural art standing proudly at the entrance of the club’s Eastwood Gardens ground.

I’d also like to think the Jimmy Devenport sightscreens are still today enhancing batsmen’s views of bowler’s deliveries. Due to their age, though, I anticipate Jimmy’s sightscreens are similar to Trigger’s broom, as in none of it’s original components remain.

The only thing left the memories created by cricketer’s of a different generation.