Within the confines of casa Strachan is a large storage box. Unlike the musical box in 1970’s time-lapse animation kids show Camberwick Green, this particular treasure trove is bereft of an enclosed secret.

A particular childhood favourite of mine, from the BBC’s ‘Watch With Mother’ series, the children’s TV programme above commenced with a rotating vessel opening it’s lid to exhibit that weeks main plot character; wood puppet legends such as Windy Miller, PC McGarry or Miss Lovelace.

The two containers I’m alluding to are dissimilar in looks and usage. However, they both share common ground in that their contents can trigger a wealth of stories. These won’t necessarily be the most high-brow of yarns (apart from three opera programmes), yet they’re residency is no less welcome in the recollections database.

The revolving musical Camberwick Green hexagonal vessel begat tales of PC McGarry’s shame at being exposed as corrupt, not to mention Windy Miller’s windmill storing powder other than flour for Captain Snort from Pippin Fort.***

My plastic container incorporates brochures and tickets recording the family’s attendance at numerous music gigs, theatre productions and sporting events. Mementos stirring nostalgic reminders of days/nights out, each sharing a place under the ‘good times’ segment on my clan’s life canvas.

This cylinder of memorabilia which evokes a plethora of fond recollections is so weighed down with programmes, vouchers, badges and tickets, when attempting to move it I’m at great risk of a hernia.

On Sunday, I had cause to remove the lid of this large plastic vessel to add recently acquired gig/musical brochures, along with their accompanying entrance tickets.

Breaking most of the health and safety rules we have in the household (apart from not igniting the cooker hob with a firework), I lugged it downstairs with a view to sorting through this coffre au tresor. 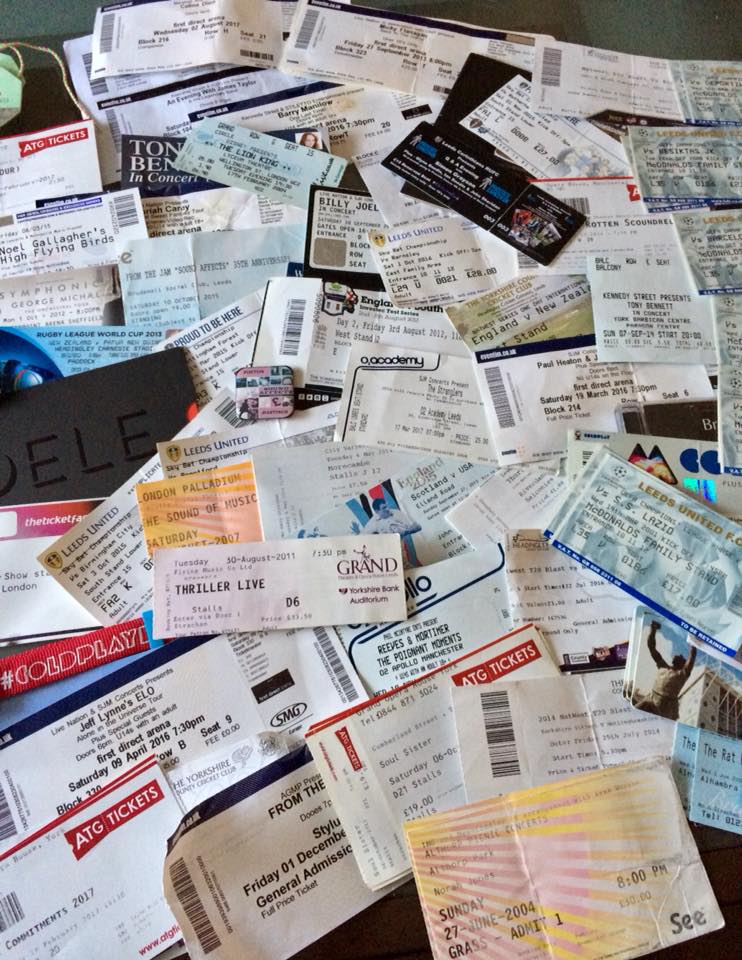 Much to my spouse’s chagrin, on entering the living room I upturned the box to allow its predominantly paper contents to seep onto the living room floor. The contents force akin to lava slowly easing it’s way down concave volcano sides.

Thankfully it wasn’t lava as, with flows taking months to cool, the downstairs of our domicile would have been out of action for a while…… Plus, I quite like the hearth rug!

Although the treasure within this chest is relatively worthless in terms of monetary value, the recollections it’s constituents trigger are priceless to my family. This booty manifesting flashbacks to several entertaining evenings in theatres, arenas, stadiums and parks within various counties of our sceptre isle.

Joyous occasions, some of whom dragged us from the depths of despair during my wife’s long-running cancer fight. It’s amazing, or perhaps not, how much witnessing the likes of Adele, George Michael, Lionel Ritchie, Billy Joel and Coldplay live on stage, or numerous musical theatre productions distracts one from being a “ticking time-bomb.” (My wife Karen’s words, not mine).

Unlike the Camberwick Green music box, the trinkets in my treasure trove aren’t given an amiable welcome by the voice of Brian Cant on gaining their liberty…….. That being said, Windy Miller has never seen an Adele, Michael Jackson, James Taylor and Jools Holland in concert, so he can put that in his pipe and smoke it!

Is there any booty stored in this family treasure chest that doesn’t stir fond recollections? ……… Does this memory cylinder contain a metaphorical trinket that triggers a melancholic epiphany that inexplicably avoids being jettisoned into an Orwellian Room 101?……. Could it be that the coffre contains a curio that is the antithesis of it’s objective of bringing joy? …………… Errrrr, not really. Although lugging the bloody heavy thing downstairs was a real pain in the ass!!

*** Disclaimer – Camberwick Green was a children’s programme. None of the storylines I allude to for PC McGarry, Windy Miller and Captain Snort ever existed. Miss Lovelace has no link to the naughty lady of the same name!