Yesterday I wrote of festivities at Chez Strachan on Christmas Day.

I couldn’t share the taste of the turkey dinner or the mince pies via the medium of blogging. However, my narrative of around 800 words will have hopefully given a taste of my family’s experiences on this special day in the calendar.

To avoid that monologue becoming inordinately wordy, I excluded the evening activities of board games and watching TV in the narrative. 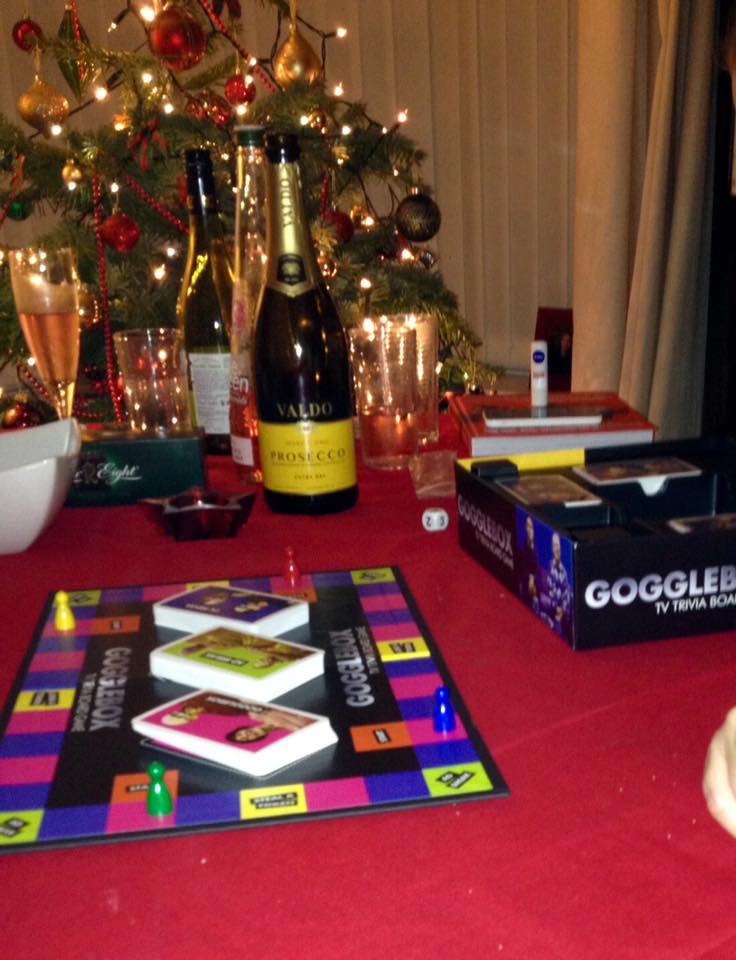 This year the board game’s ‘James Bond Trivial Pursuit’ and ‘Gogglebox’ were purchased to enhance our Christmas Day entertainment.

That being said, it soon became apparent the demographic audience for ‘James Bond Trivial Pursuit’ was that of 007 geeks. Not a northern English family who were hoping for questions along the lines of “Spell the name of Bond’s boss.”, “Why did Nick Nack fail his trial for the Harlem Globetrotters?” or “Do you want another beer Gary?”

By geeks I’m referring to people who know minutia akin to the speed Bond’s mini submarine traveled in scene 15 of Thunderball, the name of Rosa Kleb’s hairdresser in From Russia With Love and the washing powder 007 used on his undies in Die Another Day!

Disillusioned, we packed in that game, whilst I made a mental note to memorise the answers for next Christmas, so not to look as dim on the subject of a film franchise of which I’m very fond.

Before we moved onto the next board game, I randomly asked my son Jonny if he realised his name backwards was Ynnoj…… Or Nohtanoj if he reversed his full Christian name. He quickly made it clear he didn’t, nor indeed want to, know this snippet of information.

I really should have moved on at that point. However I became distracted further as it randomly hit me that reversed Christian names take on an almost biblical old testament slant.

For example my biblical name is Yrag and my wife Karen’s in Nerak. This led to thoughts of the following fictional passage:-

The reversing of names discussion passed swiftly, much to the relief of the assembled members of the household. After that nonsense we moved on to a game of the ‘Gogglebox’ board game.

This was a hard fought game of TV trivia questions, which eventually saw Ynnoj and Ynnej victorious with Yrag a close second. Nerak and Lehcar came in third just in front of Kane and Abel……. Dick Dastardly and Muttley brought up the tail.

After the board games and idiotic name creation, we retired to the living room to watch some Christmas Day TV. I’m not normally a fan of programmes that include precocious kids in its cast. Despite this, with Home Alone 2 and Gogglesprogs, that genre was our predominant viewing fare that evening.

I didn’t mind on this occasion, as the movie and the reality show were both good value humour wise.

It also helped that as it was Christmas, which I embraced with spiritual plenty following overnight Yuletide visits from the ghosts of Xmas past, present and future.

The ghouls were pleasant enough, but I could have done without their melodramatic entrances. Much to my chagrin, their over the top ‘hamming it up’ caused the breakage of two window locks and the drapes being ruining with chain oil.

Apart from Karen and Rachel, none of us stayed up too late. The excitement of finding out our Biblical names had contributed towards the rest of us becoming physically and emotionally drained.

Karen and Rachel stayed up watching ABBA in concert, followed by sitcom Father Ted. Additionally, they nattered long into the night about Rachel’s thoughtful and poignant present to her mum.

Our 22 year old daughter paid to name one of the stars in the sky after her mother. So now her incurably ill mum is the owner of a star recorded on the Intergalactic Star Database for eternity.

Karen wept openly when she’d opened the gift on Christmas morning. I’d like to think that was from a display of emotional gratitude, not because it wasn’t shoes.

The poignancy of the gift, bearing in mind the part a guiding star had in the nativity story, was not lost.

I was very proud of our offspring for her thoughtful and innovative present. Saying that though, she didn’t spend hours thinking of a name for it; as she merely christened it ‘Karen Strachan’!

If Rach had have named the star using our old testament naming convention earlier, she may have gone for the more imaginative Nerak Nahcarts ……….. Too late though! Karen Strachan it is and will stay for eternity. I couldn’t think of a more touching gift for her brave and selfless mum.

In my next blog I will pen what happened after Christmas Day. This includes a quick return to Chez Strachan by Jonny and Jenny, due to the threat of flooding and Rachel finding out the unorthodox death of a former movie director.