I wrote yesterday of the first part of a trip I undertook with friends in the Yorkshire Dales at the weekend. It was a tale of inclement weather, trekking, camaraderie, wine gums and the skillful use of the word juxtaposition in paragraph eleven.

Today I intend to try paint a picture of the remainder of the trip with Steve, Gemma, Kerry, Mark, Mandy, Bob, Stu and Theresa. Hopefully, it will be an aesthetically pleasing picture. A canvass that captures the spirit of conviviality and impromptu ‘old school’ entertainment provided in a remote Yorkshire hostelry, during that evening’s terrible storm.

After Saturday’s extreme weather walk from Dales village Clapham to Gaping Gill (and return), which I transcribed yesterday, we headed off in a convoy of cars on the short trip to the Station Inn, Ribblehead.

Deep laying rain water necessitated a cautious drive. As I drove, I pondered if this is how the canals were first created in Venice. It also brought to mind the old joke I heard as a kid on The Two Ronnies. They joked that Venice was the only city that successfully keeps prostitution off the streets.

The main reason I can remember a joke, I heard as a kid, on a mid 70’s comedy show was the fact I laughed like hell at it, but I didn’t have a clue why! …….. I had no idea what prostitution was! …….. Anyway, I digress!

After cautiously and successfully navigating the roads to Ribblehead we arrived at the accommodation our organiser Kerry had pre-booked. She had arranged dinner, bed and breakfast for the group. Here she also instigated a mischievous plan to steal one of the group’s meals later that evening!

Due to the pub having limited rooms, the two married couples stayed in the Station Inn, whilst the other five shared various rooms in the adjoining bunk barn.

A long trip in December where the inn was full so traveller’s had to sleep in a barn. Now where have I heard that story before?!

The Station Inn, Ribblehead – Taken during a drier visit in May. 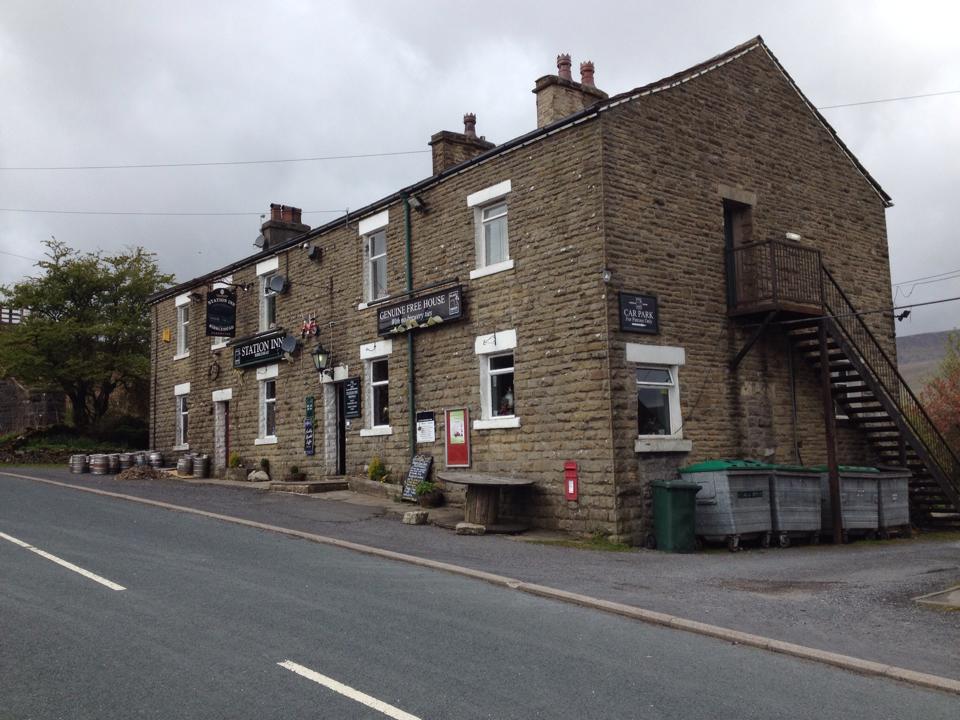 The Station Inn is a short walk from the iconic Victorian built Ribblehead Viaduct, which was opened in 1875. Amongst its celluloid appearances was one of the Harry Potter movies. It was a critically acclaimed portrayal that earned it a BAFTA nomination in the ‘Best Supporting Viaduct’ category.

As well as an advert gondelier vacancies, there is a sign in the pub which proclaimed that the Gents has the best view from a toilet in the Dales. I couldn’t comment on this visit about the claim, as it was dark.

However, I did take a picture (below) in May of looking out from the urinal on the impressive view of the viaduct. I hasten to add that I only took the camera out when no other people were in the gents!!….. And it was the only picture I took!! 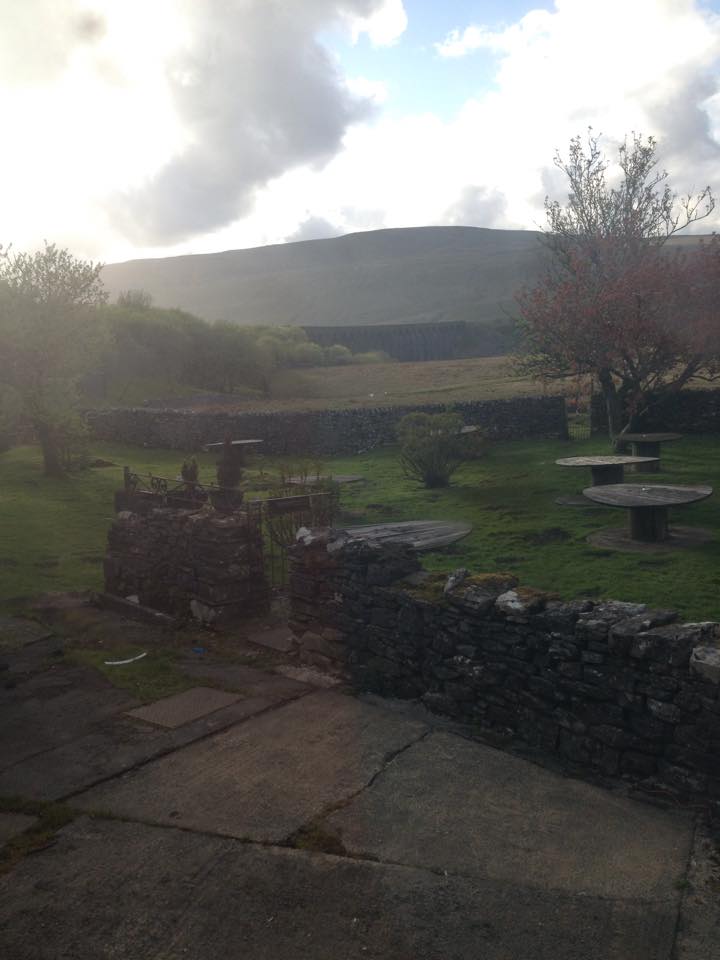 After a quick pint, we retired to our accommodation to dry off, shower and don our Christmas jumpers ready for our festive evening meal.

As my ‘Father Ted’ Xmas jumper hadn’t been delivered I had to resort to a contingency sweater. This was blue adorned with the words ‘Knit 1 Pearl 2’. A disappointing league result for Knit, but it got its revenge by beating Pearl in the cup later in the season! ……… That wasn’t true by the way; it was just a yarn! ……. Blimey, tough audience!

My Father Ted Xmas jumper that hasn’t turned up yet! 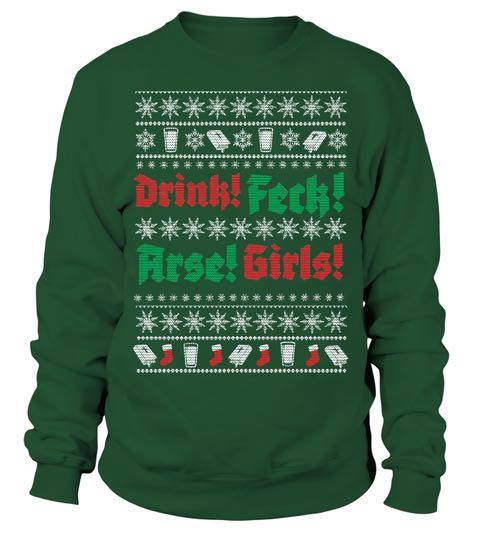 My contingency jumper was in fact red and was designed like a santa suit. I didn’t wear it for long, as not only was I too warm in the pub, but I also looked like Daniel O’Donnell in it! ……. I needn’t have worried, though, as the folk group who turned up later included old Irish songs in their act; so I’d probably have fitted in well!

At around 18:30, we were all seated in the pub with a drink and the convivial evening began. In fact, you could cut the conviviality with a knife, which is more than you could the turkey! ………. Only joshing, the food was very good!

I have to say I shouldn’t have been eating turkey, though, as I pre-ordered pork. However, due to unforeseen circumstances, Kerry received my meal and commenced eating it before an embarrassed waiter informed me only one pork had been pre-ordered!

Being an amenable chap and as they didn’t have a wine gum option, I told him to just bring me back the turkey dinner he mistakenly served me earlier, which he did.

It was a pleasant meal, although I’m convinced there weren’t false teeth on my plate when he first brought me it!

As Kerry laughed maniacally at my misfortune, the lights flickered, her eyes turned red, she stamped her cloven hoofs and flames of fire surrounded the large three pronged fork she was clasping!

People who know her well, such as Mark and Bob, said it was a sinister side they’d not seen before! The maniacal laughing was nothing new to sister Mandy (that is actually her sister not a nun, by the way!) who’d had many of her meals stolen when they were kids! She assured me, though, her sis was undergoing help for her culinary kleptomania!

Around the time we’d finished our main meal, a large group of middle aged/elderly people, carrying a variety of musical instruments, sat in the corner of the bar.

They were also in good spirits (not to mention full of spirits) and the noise level certainly ramped up at this point! As they tuned their instruments, I had a epiphany when all of a sudden I thought to myself “I bet they’re the live band!”

I’m not sure what brought on this realisation, but stone me I was proved right a few minutes later when they started playing music.

Amongst the contributors musically was an old guy singing Scottish and Northumbrian folk ballads. One of his Northumbrian ditties was a old football song that hasn’t been sung by Newcastle United fans for many generations. I’m referring, of course, to ‘E-I-Adeo, We’ve Won The Cup!’

The leader of the folk group was a jovial middle aged guy. A red faced chap, with long locks of grey hair and a beard. During breaks he spent his time engaging with the pubs punters, winding them up and trying to get them to sing a song!

He asked me at one point if I wanted to sing a chorus acapello. I told him I don’t mind singing, but there was no way I was going to do it with no clothes on!

Also included in the entertainment was bagpipe playing/singing from Northern Irish ex-Marine bandsmen and various solo/group numbers on guitar, flute, accordion, banjo and other folk instruments.

It was great entertainment and an unexpected broadening of my horizons. This good ‘old school’ entertainment in a Yorkshire Dales outpost wasn’t expected by the nine of us. Neither, though, was how gratifying the experience would be. 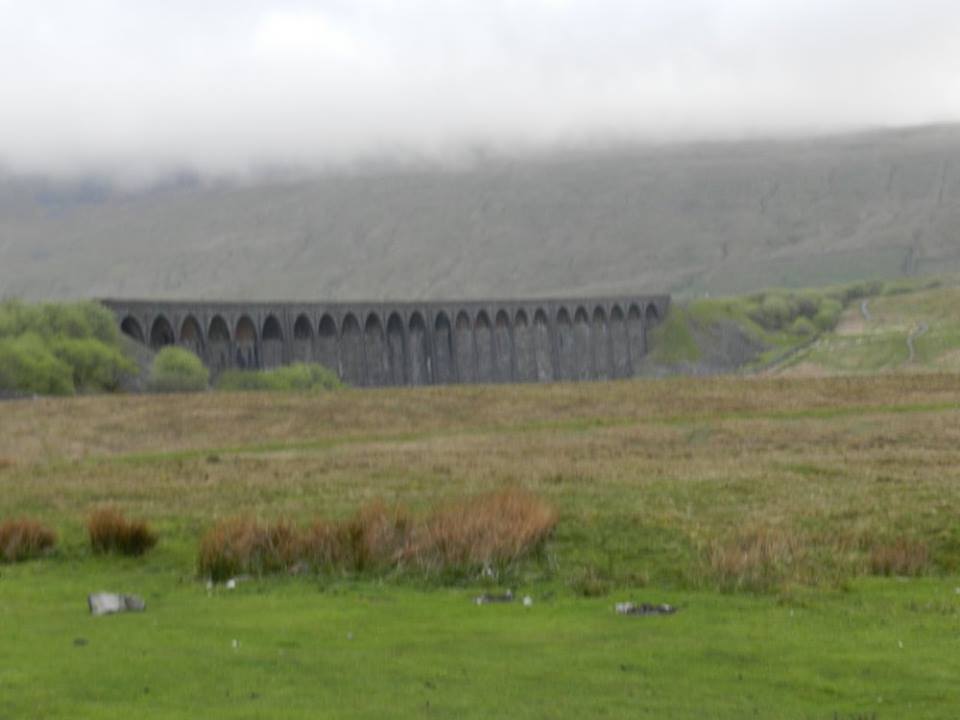 Despite missing out on my roast pork, it was a highly enjoyable weekend with positive, humorous and engaging people!

A roast pork dinner similar to the one I had stolen !!! 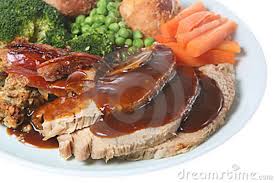