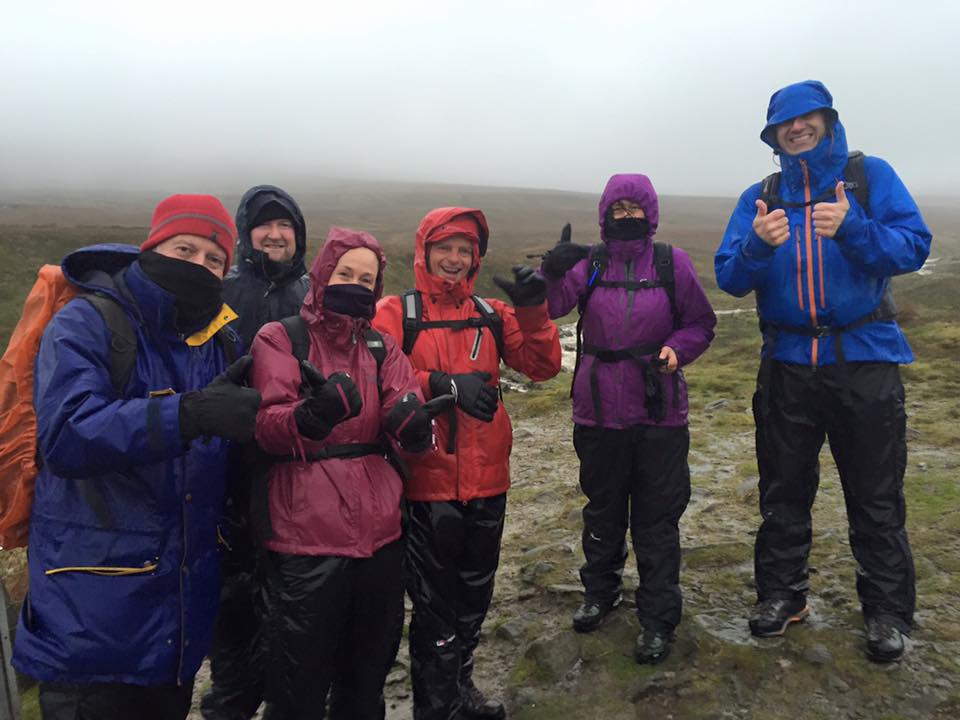 I spent my weekend over in the Yorkshire Dales. It involved great company, a longish walk in extreme weather, a convivial Saturday evening, which included a hearty Xmas meal and being royally entertained by a folk group.

I met my cousin Steve, his wife Gemma and friends (Kerry, Mark, Mandy, Bob, Stu and Theresa) in the village of Clapham late Saturday morning. On arrival, as the weather consisted of driving wind and rain, a discussion took place as to what route and distance our planned walk should incorporate. Although involved in the decision, it has to be said I spent most of the discussion time wondering where my bag of wine gums were!

The consensus was not to let the driving wind and rain deter us. That’s from walking by the way, not from locating my wine gums!

However, the planned walk up Ingleborough (the second highest mountain in the Dales) was probably not a sensible option. So the decision to trek only as far as Gaping Gill (approximately 6 miles return journey), was taken.

Bearing in mind the various weather warnings, some may have deemed the decision to walk as foolhardy. However, weather warnings are for sensible people who don’t want the experience getting soaking wet, cold and blown off the top of a mountain, so that didn’t apply to this group!.

When I made my decision, as a relatively inexperienced walker, I put a lot of store into the advice of the experienced trekkers/mountaineers in the group. Additionally, I’d just found my wine gums so was ready to take on anything at this point!

So at around 11:30, with weather warnings (but thankfully no adverse wine gum warnings) in place, we headed off. As we trekked, my cousin Steve and I did our best to lower our mood early doors by discussing the soap opera that is Leeds United. Thankfully, it wasn’t long before we moved onto more cheerful matters like current world affairs!

Having experienced walkers on treks like this is invaluable. You’d be an idiot to walk the Dales in any conditions without a good knowledge of the route, never mind in the extreme weather we faced.

The fact they guide you in a polite and informative manner made a refreshing change for me. In my car I’m used to the voice next to me saying “You’ve missed the turn, you idiot!” or “Just pull in here, I need some potatoes from Sainsburys!”…….. It’s no good, I’m going to have to invest in a new Sat Nav (GPS)!

On the outward journey, as we got steadily more saturated, one of the obstacles needed overcoming was a waterfall. Now don’t get me wrong it wasn’t like scaling the rocks around Niagra Falls. This was  smaller geological climb I named Viagra Falls. I gave it that moniker as it made the journey harder and longer!! ……… Blimey I’ve done well, it’s took me nine paragraphs to lower the tone! 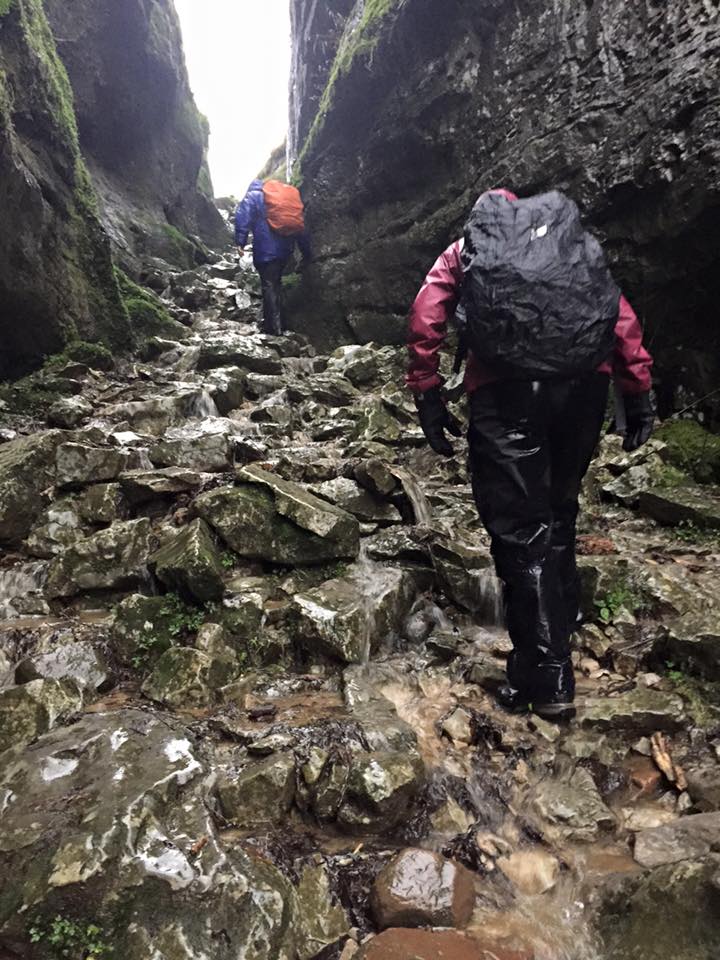 Around an hour and a half into the journey we stopped for lunch. I’m normally a fairly organised person, but on Saturday I was the complete opposite. I’d forgotten my back pack, my waterproof trousers, my lunch and water!

Thankfully, two of the party (Steve and Mark) stepping in and shared a sandwich and a granola biscuit. I was very hungry at this time, so the food tasted like it had been made by the gods. Man cannot live on wine gums alone, I should know I’ve tried it, you also need beef sandwiches and granola biscuits!

When it came to re-hydrating, for me it was as Samuel Taylor Coleridge wrote in his poem The Rime of The Ancient Mariner, “…water, water everywhere nor any drop to drink.” ……… Until I was provided with a cuppa by a group member anyway!

Thankfully, someone also lent me some waterproof trousers prior to commencing the walk. In my rush to leave home on Saturday I’d brought two waterproof coats and forgot my waterproof bottoms! I had visions of me having to wear one of the coats with my legs through the sleeves, if someone hadn’t a spare pair!

If truth be told, I probably subconsciously didn’t take some of the walking essentials in belief we wouldn’t go for a walk in the terrible weather forecasted!

Not long after lunch we reached our destination, Gaping Gill. Along with the waterfall climb, this was probably the most challenging element of the trek. At this point we were subject to 80 mph winds in an very exposed area.

Trying to shelter from the elements at the exposed Gaping Gill (below) …. I’m stood at the back thinking “Thank god I didn’t bring my trilby!” 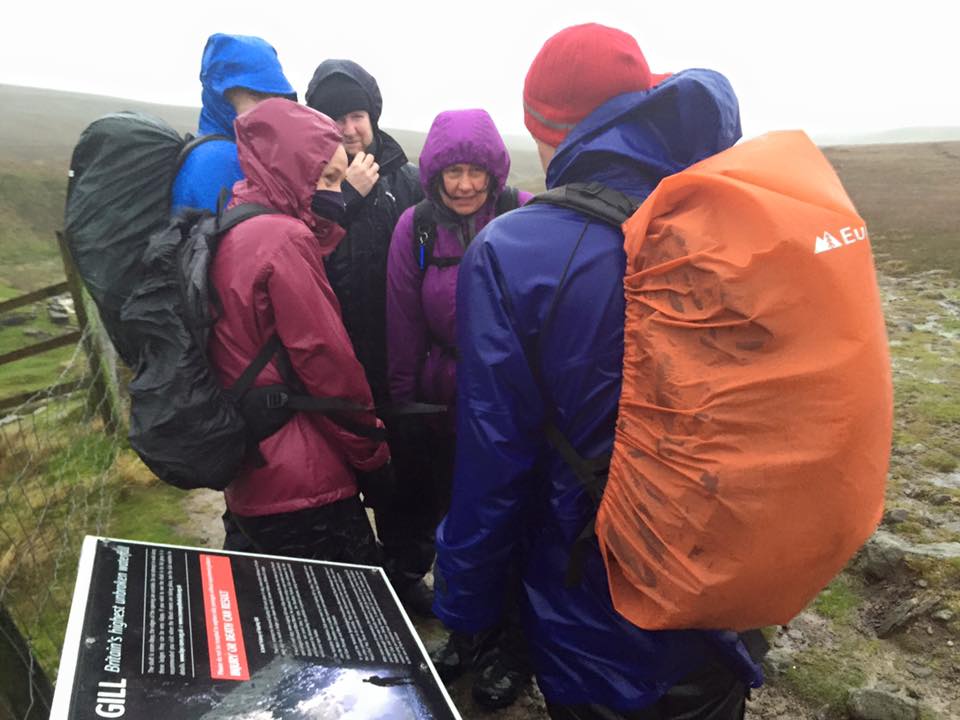 When at Gaping Gill, I asked one of the group what they knew of the cavernous feature we stood admiring below.

They responded, “It’s the tallest unbroken waterfall in England and the largest underground chamber naturally open to the surface. The cave is a 322 ft deep pothole with the stream Fell Beck flowing into it. After falling through one of the largest known underground chambers in Britain, the water disappears into the floor before resurging adjacent to Ingleborough Cave.”

I was really impressed with their knowledge and asked them how they knew so much about this geologically impressive feature. They pointed into the distance and responded “I’ve just read it on that board over there!”

After a group photo, a wine gum and the relief of not being blown into Gaping Gill we turned to commence our journey back to Clapham.

Apart from the first ten minutes or so, when we were exposed to the ferocious winds, the return leg was an easier journey to navigate. I did have an issue, as in my soaked waterproof trousers were so heavy I had problems keeping them up! 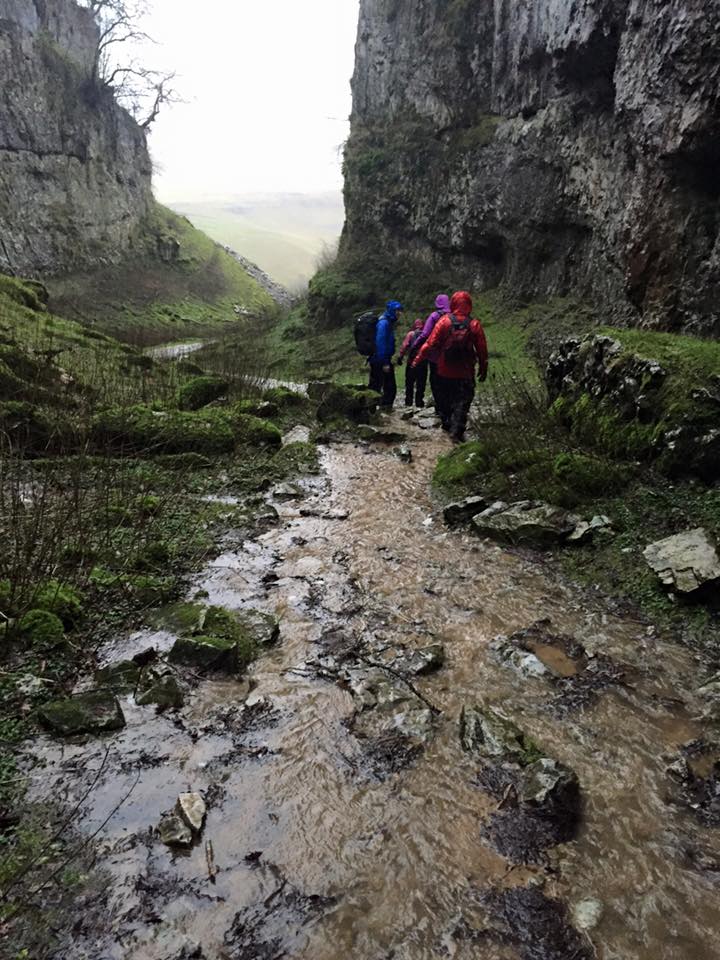 I spent every few minutes having to haul my waterproofs back up. The borrowed trousers had a cord at the side, but when I pulled it the waist didn’t tighten. I kept pulling this cord but all it did was pull the trouser legs up like a horizontal blind! ……. That’s a joke, obviously, but it would have been funny if it had! I may invest in a pair like that!

As we walked back, one of the party told me that although possibly foolhardy, the group prefer their walks to be about 10 miles, challenging, scenic and with a hint of danger. That being the case, I’ve arranged the next group walk from Crossgates to Leeds city centre, via Halton Moor and East End Park!

We got back to Clapham around 15:30 and headed through the torrential rain on the waterlogged roads to the Station Inn, at Ribblehead. This is where Kerry booked the groups dinner, bed and board for the night!

In tomorrow’s blog, I’ll write further on the entertaining evening, how my meal was stolen by our organiser, the amiable company (apart from my meal thief!) and the view from the Gents at the Station Inn!