Fifty two years ago yesterday Lee Harvey Oswald, the alleged sole killer of the US President John Fitzgerald Kennedy, was himself murdered in the basement area of a Dallas police station.

Oswald was murdered live on TV by Dallas night club owner Jack Ruby. NBC viewers watched on as the New Orleanian was shot, whilst the network filmed his scheduled transfer to a county jail.

It wasn’t a planned tele-visual event I hastened to add! NBC didn’t transmit a pay-per-view homicide channel at the time, for the prurient more discerning viewer! The planned transfer was recorded live and so Oswald’s misfortune became NBC’s TV gold. 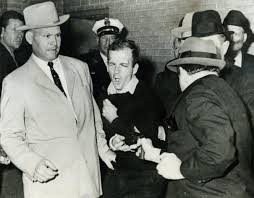 Since that day on 24th November 1963, with Lee Harvey Oswald ‘out of the way’ and unable to testify, conspiracy theories have been abound as to who was responsible for one of the most famous assassinations in the 20th century.

I have had a long held fascination with the assassination of the 35th President of the United States. I’ve found the various bits I’ve read or viewed about this sad period in US history thoroughly absorbing.

I’m not going to use this blog to give some pretentious crap about my opinions on the assassination. After all I’m not knowledgeable enough about the incidents surrounding the demise of JFK to expertly comment.

The knowledge I have acquired tilts my opinion towards a conspiracy, but even if the conspiracy theory is correct, which one of the scores of them is true? They cannot all be right, so who do you trust and which is the most plausible?!

John F Kennedy with his wife Jackie in the Presidential motorcade, shortly before his assassination in Dallas, Nov 1963 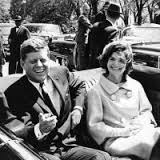 The Warren Commission (that included future US President Gerald Ford), set up by Kennedy’s successor President Lyndon B. Johnson to investigate the assassination, commenced a ten month evidence gathering exercise on 29th November to identify the culprit(s).

The Commission’s 889 page report on its findings was presented to the American public on 27th September 1964. Warren concluded that Oswald acted alone as the shooter of JFK and that Ruby acted alone in murdering Oswald.

In the movie JFK, the Warren Commission’s conclusions were discussed in a scene by New Orleans DA Jim Garrison (Kevin Costner) and Senator Russell Long (Walter Matthau). The script attributes the Senator as being unequivocal in his belief that Earl Warren’s committee were “Picking gnat shit out of pepper!” with their findings.

The trouble with the conspiracy theories, for me, is even those who are adamant Oswald either didn’t do it, or acted with an accomplice(s) can’t agree who the real culprit was. From the four or five books and documentaries I’ve seen about the assassination those allegedly responsible range from some or all of the following culprits:- the Mafia, Pro Castro Cubans, Anti Castro Cubans, Russians, CIA, FBI to the unlikely one of a bloke dressed as Scooby Doo on Dealey Plaza in downtown Dallas, on 22nd November 1963!

My opinion, for what its worth, of a likely conspiracy is heavily influenced by the works of conspiracy theorists.

I’ve not read anywhere near as much of the anti-conspiracy arguments, so giving a balanced and informed view on the assassination is difficult. In truth Joe Public will probably never know what really happened in Dallas on that November day.

Many arguments hinting at a conspiracy, too numerous to add in this short blog, fascinate me. In particular, the mystery surrounding the behaviour of one of the bullets, which is advocated in the Warren Commission report to back up the sole shooter theory.

The report explained that three bullets (from a manual Carcano rifle) hit the Presidential motorcade during the 6-7 seconds of shooting that took place during the incident. To explain the array of injuries to President Kennedy and Governor Connally, who sat immediately in front of JFK, the commission subscribed to the theory that one of the bullets caused all of Kennedy’s and Connally’s non–fatal wounds by:-

Exited through his throat.

Went for a weeks vacation in Florida.

Came back and entering Connally’s back.

Went and had its Florida pictures processed.

Passed through his Connally’s right wrist.

Before finally lodging itself in Connally’s left thigh.

After its adventurous journey, the bullet turned up on Connally’s stretcher several hours later without a sun tan, holiday photos and in near pristine condition.

*Disclaimer – Some (or indeed all) of that bullets journey is fictional.

The path and the injuries caused by the magic bullet 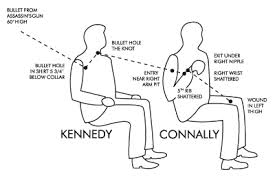 I’m not a ballistics expert (who, incidentally, claimed it was possible), but that is one improbable journey for a bullet. However, it had to be sold as the truth, as if that bullet didn’t cause all of the non-fatal wounds then there had to have been another shooter, bearing in mind Oswald was said to have used a manual rifle.

To close, the intention of this blog is not to try shed light on a conspiracy as I, like many other millions, don’t know what the hell happened around the Texas Book Depository, Dallas around midday on 22nd November 1963!

These are just the ramblings of a man who’s read too many conspiracy books!

There is a saying that everyone can remember where they were when John F Kennedy was assassinated. I have to be honest, though, and say I was only seven months old at the time so my recollection isn’t that good.

One of the dafter conspiracy theories place me in my pram behind a picket fence on a grassy knoll in Dealey Plaza, holding a manual Carcon rifle that day. However, I can assure you that’s well wide of the mark and, according to my mum, I was having my tea in our home in Leeds!

Despite a conspiracy theory to the contrary, this little chap had nothing to do with it! 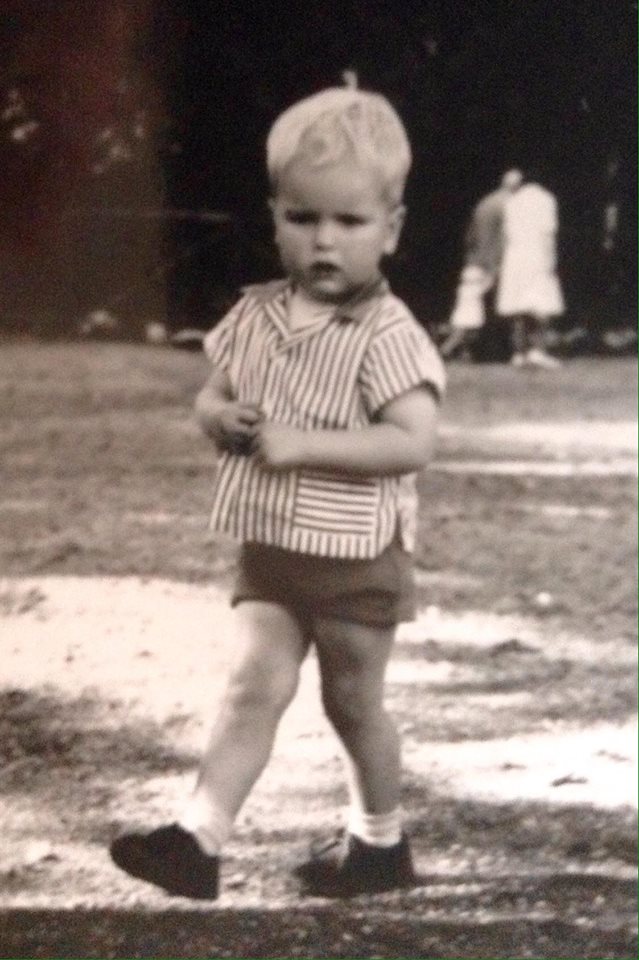