As I walked out of Elland Road with my son yesterday, after another awful Leeds United performance, my mind drifted back to a mild evening at the same venue on 2nd May 2001.

On that night, unbeknown to me at the time, I uttered perhaps the most prophetic words I’ve said in the half century of years I’ve been on this mortal coil. The time was around 8:40 pm and half time in the European Champions League Semi Final 1st Leg between Leeds United and Valencia. 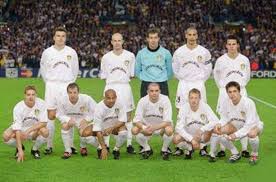 I was stood with my cousin and 11 year old son at the back of the lower East Stand near the away fans. Jonny my son was enjoying a half time pie, whilst my cousin Tony drank from his bottle of Diet Coke.

I stood trying to broaden my mind pondering about great mysteries of the world. Enigmas such as, can you make candles out of ear wax and do Peter Ridsdale’s goldfish really have bad memories……… I don’t know about the goldfish, but since 2001 Peter and a multitude of other inept people have contributed to many bad memories for us Leeds fans!

I scoured my match programme for the answers to my musings without success. I asked the bloke next to me, who was reading Hustler, if his publication could shed light on my conundrum. He looked blankly back at me without responding, so I asked him if it had last week reserves score in there! ….. No he didn’t laugh either!

I then turned to Jonny, who’d finished his gravy and potato pie and the following discussion took place:-

Me – “Sorry Jon, I’m getting you mixed up with the bloke down the road!”

There was a pause at this point, as I suspect neither of us wanted to make the conversation any more surreal!

It was at this point when I formed my unintended prophecy, when I conveyed to my son:-

Jonny didn’t respond. He probably thought what I’d said was even more ridiculous than (jokingly) mistaking him for a farmer. I have to admit I said it as a throw away remark. One to highlight the fact he’d got to see some of the top teams in Europe in just one season. Not to hint at the implosion that started shortly afterwards, which saw our great club drop two divisions, lose all our best players at ever transfer window for 12 years, acquire some questionable owners and still sees us struggling to return back to the top division.

To be honest, if at 8:40 pm on 2nd May someone would have told me how the next 14 years would pan out I’d have told them “Utter nonsense! By the way, have you met my farmer son?!”

Jonny and my half time discussion concluded when club anthem ‘Marching On Together’ blasted out as the players returned for the second half. My cousin Tony, along with thousands of other, yelled “Come on Leeds!”, before asking the lad next to me if he could borrow his Hustler!

I turned to see the face of my boy, who was captivated by the return of his heroes onto the vast green surface below. I patted his head with pride and asked “Are you sure you don’t work on a farm?!”

They were fantastic memories that fans of most clubs will never see in their lifetime. Although, Jonny did have terrible nightmares after watching the Valencia game that night, as it was refereed by Pierluigi Collina. The shaven headed Italian with the sunken eyes was a great ref, but he was a scary looking geezer! I was always of the opinion any games he took charged of should have been after the 9 pm watershed! 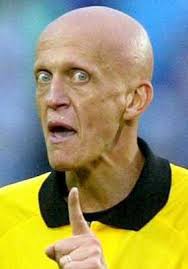 Another indication of how far we have plummeted in the last few years is the half time competition prizes. Around the time of decent Premiership finishes and the Champions League run, the prizes were cars. Now it’s a dozen meat pies!

In the most convoluted half time competition I’ve known, you can now win twelve pies if you are spotted eating a pie of the sponsor’s brand! The mischievous side of me wants the winner to turn it down, telling the announcer “I don’t want them! I’ve just had one and they are crap!”

I envisage the winner getting home, where he’s questioned by his wife whether his beloved team had won. He huffily rips off his yellow, white and blue scarf, before telling his wife “No we sodding lost again! I’ve won us a dozen pies for tea though, love!”

With unremitting sarcasm she replies “Fantastic, I didn’t fancy that lobster I bought for £20 this morning much anyway, Eric!”

I’ve no idea what the pies are like (or, coming to think of it, if the winner was called Eric!). I don’t recall ever eating that particular brand. They may be brilliant for all I know! My jibe is aimed more that fact it’s a competition prize than their culinary quality!

A pie and a pint – Even they can’t cheer you up after a Leeds defeat! 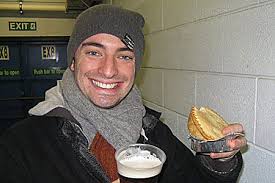 Walking out of the stadium yesterday with Jonny (now 25), freezing cold and thoroughly miserable after another home defeat, I thought of my unintended prophetic comment that May evening in 2001!

I thought I’d try the same thing, but with reverse psychology this time. So I told Jonny “Cheer up, even if you never see Leeds in the Championship again, you will be able to say that you’ve seen Rotherham, Brentford, Forest, Brighton and Bristol City at Elland Road!”

He maintained his stare straight ahead, pulled up his collar against the biting northerly wind and responded “Bollocks dad! …. Right I’m off home to round up the sheep!”

A farmer….. Not my son though! 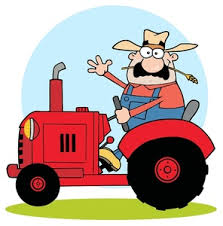