In pundit parlay, prior to coronavirus induced cessation of footballing hostilities, my half century sporting amours looked the real deal this season. Entering the unscheduled hiatus at the league’s pinnacle on the back of a five match winning streak; along with the kudos of not conceding a goal in either game.

Despite this, being a longstanding fan of West Yorkshire’s finest, I’ve witnessed many false dawns from my birthplace club. A team I first clapping eyes on Don Revie’s warriors in the 1970 FA Cup Final against Chelsea. Consequently, I’m edgy about this nine game run of fixtures.

Leeds’ pre-break form, along with a seven point cushion over any side that can stop their automatic promotion, does bestow some level of comfort. However, despite possessing great faith in the class of 2019/20, outright confidence they’ll finish the job remains a stealthy mistress.

If truth be told, though, that says more about my glass half full philosophy than coach Marcello Bielsa’s troops’ ability to once again challenge English football’s elite clubs. Surely, they can’t blow promotion for the second time in two seasons.

After all, it’s Leeds United’s centenary season and COVID has recently taken Norman Hunter (one of Don Revie’s legendary internationals), meaning scriptwriters will surely pen a happier conclusion to this episode of the LUFC soap opera…… Won’t they?!

As far as I’m concerned, “Do it for Norman!” should be the only motivational pre-match battle cry required to get Bielsa’s boys over the promotion line. 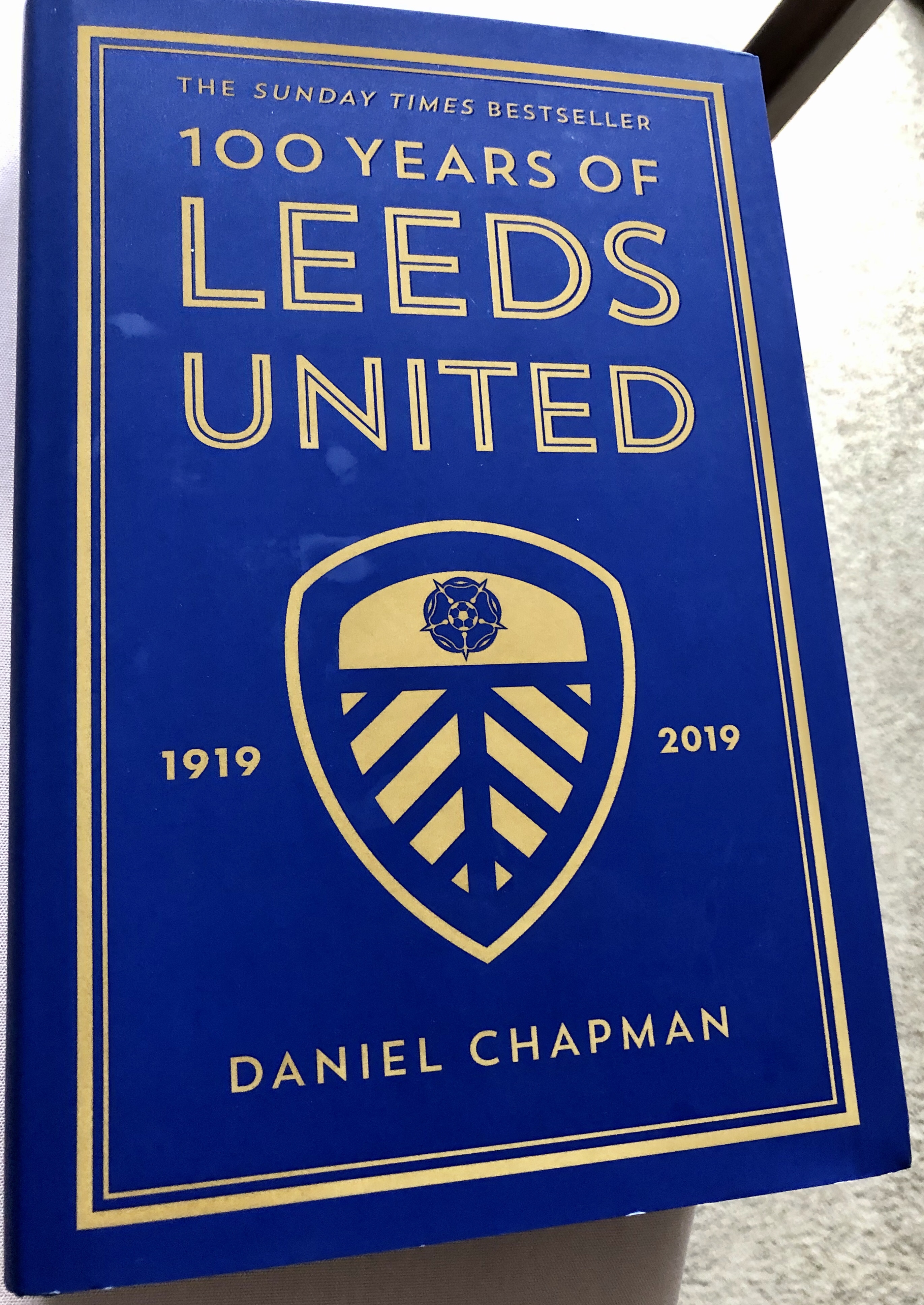 Talking of the LUFC’s centenary season, today I received a surprise gift of the book ‘100 Years of Leeds United’. Author Daniel Chapman’s story of a one-club city and it’s relationship with it’s football team.

To be honest, I’m not even 100% certain who bought me this weighty tome chronicling the history of a club who I first witnesse play at their Elland Road home in September 1970. I can only assume these sporting journals are the elusive second birthday present from my son; a bequest procured for my birthday in April.

This sloth-like delivery service presenting me with this celebratory trinket two months after my offspring purchased the aforementioned book. That’s of course if these chronicles were bought by my son Jonny. If it proves not to be the case, I’ll be at a complete loss as to the source of this gift.

One thing I am certain of, though, is hoping when the season restarts Leeds’ defenders are swifter undertaking their roles, than the despatch team who shipped out this tome. Daniel Chapman probably wrote the 400+ pages of prose quicker than it took these procrastinating gents/ladies to ship and deliver the package.

Jonny, like his dad, late grandad and uncles also worshipping the team whose home games play out in the LS11 postcode. Although, these days yours truly watches his football from the comfort of an armchair, as opposed to Elland Road visits of homage.

Of course, I’m happy when Leeds United prevail in any footballing contest. However, any verve and vigour I once bore to attend games has, in middle-age, disappeared along with the robustness of my prostate and to some extent my dad’s passing.

It was my old man, in September 1970, who initially took me on the footballing rite of passage I passed on to my boy in December 1996. The former occasion introducing me to the Leeds United church standing at the bottom of Beeston Hill. A service of numerous words unfit for kirk, along with the heady terrace whiff of Tetley bitter and urine eddying from the back of the Leeds Kop.

It may seem overly melodramatic and trite, however, walking down Lowfields Road towards Elland Road since my dad passed has become an emotional tarry. These steps first trodden as a seven year old alongside my old man, heading toward my inaugural viewing of Revie’s warriors in white, now never failing to evoke triggers of melancholy.

That occasion was a grey September afternoon, when a Johnny Giles penalty against Southampton meant I returned to home in clover. My brio not even dented by tasting a halftime cup of Bovril for the first time, which at that junction of the ageing process I found odious.

I’ve titled this narrative ‘The 100 Year War’. A term more often utilised in conjunction with the 14th/15th century conflicts between England’s House of Plantagenent and the French House of Valois.

Quite clearly, this vignette’s prose is unrelated to these centuries old Anglo-Franco battles. The reason I’ve utilised this heading is, it seems to me, throughout their 100 year history Leeds United have always seemed to involved in some conflict or other. Be that with football authorities, football press or other stakeholders within the game.

Confrontations which other than eroding the spirit of it’s followers, strengthen their resolve at willing their oft misunderstood club to thumb their noses at those intent on making LUFC’s lot bereft of level playing field…… These disciples of the LS11 chapel living by the mantra of “No one likes us, but we don’t care!”