Thursday 19th April – Due to a busy schedule, today’s flight of whimsy will have to be penned in segments. Chunks of narration conveying how my few ‘to dos’ are progressing, on what is forecast to be the meteorological silver-lining of recent cloud cover.

Arriving downstairs this morning my wife Karen enthusiastically informed me “The man on the telly says today’s sun is going to be ‘cracking the flags’.” I wasn’t aware who the ‘man on the telly’ was, though assumed it was a qualified weather forecaster, not some half-wit whose meteorological predictions were the advocacies of his sensitive bunions.

Hopefully he’s right and the sun does crack the flags, which would greatly assist later when lifting concrete flagstones in my mater’s front garden. The flags are weighty foes so any solar assistance in fragmented them before hand would be greatly appreciated.

Shifting flagstones isn’t the best activity to indulge at temperatures of around 25 degrees Celsius. However, as a consequence of subsidence it’s something I’d rather replace them with a safer substitute sooner rather than later.

After all, I don’t want anyone tripping – A fall that damages their bunions to such an extent they are no longer able to foretell upcoming weather conditions. Leading to potential litigation, not to mention the bunion owner having to rely on the erratic predictions of his pet squid Pepe.

I’m now commencing the second segment of what could be described as a literary master class….. it wouldn’t be true, but feel free to describe it that way if that’s your want.

This element of cascaded spontaneous neurological impulses is being typed on a mobile device outside our local GP surgery. Perched in the drivers seat of my trusty old Vauxhall Astra, I’m passing time awaiting my wife’s return from her nurses appointment.

With the heat of today’s solar rays Karen has kindly left a gap on two of the car windows to mitigate against me overheating in the vehicle. In between penning paragraphs of inanity I’m taking brief breaks to press my nose out of the window space and barking at passers by.

It startled some pedestrian, but on the plus side one of them brought me back a bowl of water from the nearby sandwich store. I’d have preferred the bacon sarnie he had in his other hand, but I suppose those are the breaks.

Earlier, at Maggie’s house, I removed the cracked flags and re-laid Yorkshire stone pebbles in the vacated pathway. Due to the small area involved it wasn’t an overly onerous task. It has to be said mind you, lugging bags of stones around the garden was a perspiration inducing chore in the midday heat.

My mum kindly repaid my efforts with a bacon sandwich and a ice cold can of lemonade. I very much doubt it was the same bacon sandwich the guy who’d earlier brought me water had in his possession. Although with the butty having a bloody big bite out of it, I can’t rule it out. 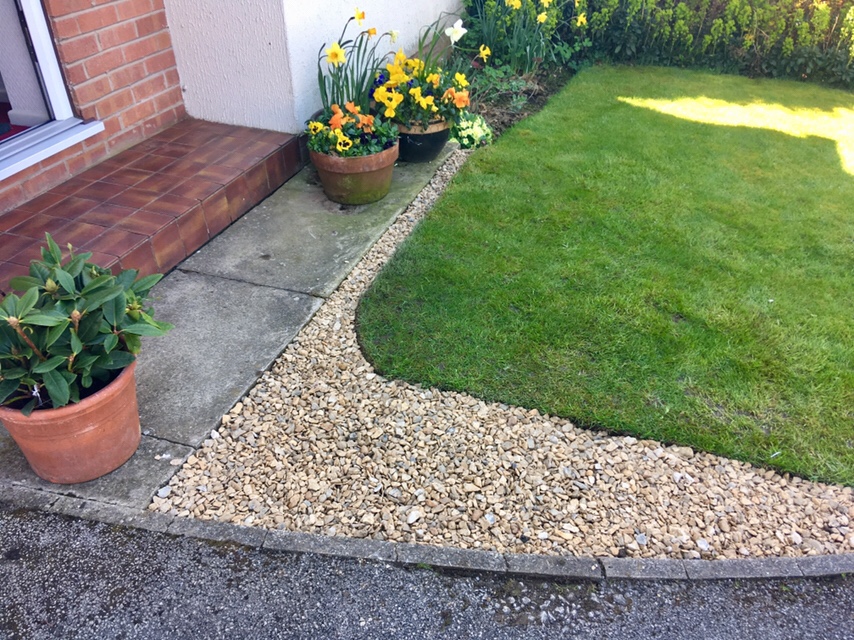 Anyhow, after my I’d finished the pebble pathway and dined on a half eaten sandwich, my old lady and I embarked on this odyssey to her crimpers. Sitting outside in my motor, the heartless mare*** didn’t even offer to leave the car windows open. A courtesy thoughtfully undertaken by my spouse earlier in the day.

***  My mother, not the very affable hairdresser

A spiteful act my siblings and I became accustomed to in our fledgling years – An era when donkey bites, Chinese burns and enforced watching of Horse of the Year Show were common place in our family home.

Concerned that I was overheating in the baking hot car, a passer-by has just smashed the front passenger door window of my vehicle. At least that was his explanation when I questioned his motives for such a reckless act.

From the shocked look on his face, though, I suspect he hadn’t seen me and was really planning to steal my Carpenters Greatest Hits cd – The album carelessly left on view upon the car dashboard……… I’d proffer my theory was backed further when, moments after relaying the lame excuse, he legged it down the street with the disk in hand.