During a bizarre dream earlier in the week, astrologer Russell Grant recommended utilising the ingredients marmite and baked beans for a topping (see A Pizza The Action ). Despite this well-meaning advocacy, Parma ham and rocket were the bedfellows for my margarita base……. I’m unsure what alarmed me the most about these visions in slumber, the unconventional topping of marmite and beans or the fact I dream about Russell Grant!

In a fit of oft seen eccentricity, Karen requested her pizza ingredients include rocket and the souls of the oppressed. Being an accommodating husband I acquiesced to this idiosyncratic wish; although, it has to be said, trying to buy the souls of the oppressed was a challenge. None of the Leeds based supermarkets stocked them, consequently I ended up travelling 90 miles to her home town of Birtley to fulfil her request.

Disheartened after the 180 miles round trip in sweltering heat for a pizza ingredient, I added my oppressed soul to the others on my spouses topping.

The odyssey to the north east of England made worse after the vehicle’s temperamental air-conditioning wouldn’t working unless BBC Radio 2 played on the car’s entertainment system. Consequently, when needing to cool down in my mobile greenhouse, I had no option but to switch on Steve Wright’s Big Show.

I’ve nothing against the chirpy DJ, but the canned laughter, applause and factoids usually has the affect of turning me into one of his old ‘callers’, one Mr Angry from Purley. I shouldn’t really complain, after all thanks to the factoids bequeathed by Steve and his buddies I now know the gestation period of a heron egg – Not to mention how cheeseburgers got their name. 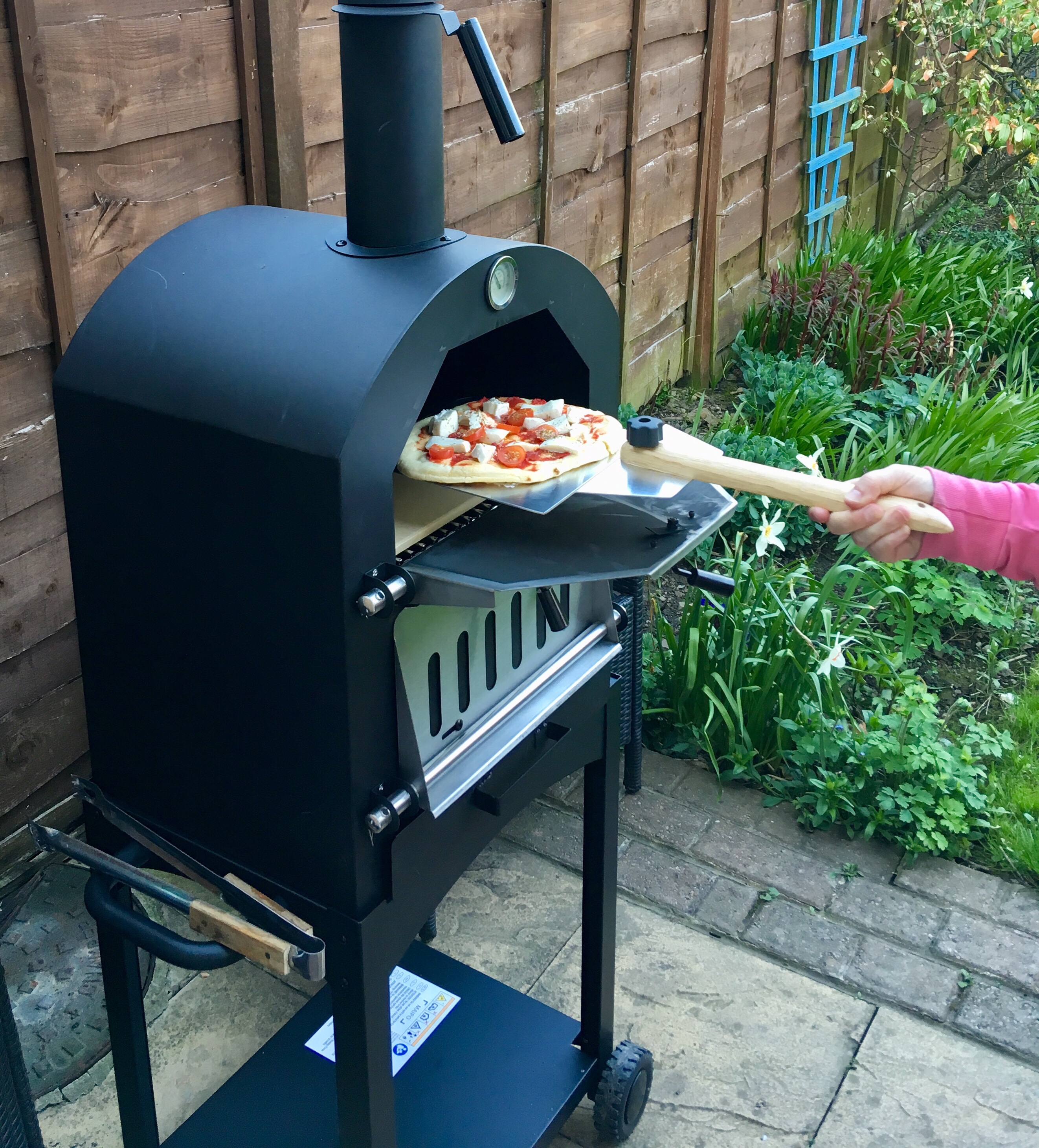 Anyhow, back to the alfresco dining……..

After our individual pizzas departed the charcoal fuelled oven, fresh basil was added to flavour, before I delivered the food to patio table on a pizza paddle.

When dining alfresco, I’m always cautious not to mimic my indoor table manners of  emitting a raucous post-slurp belch. Consequently, yesterday evening I sipped my glass of cabernet sauvignon with decorum, behaving as if in the company of royalty.

This elegance extending to a gentry-like raising of my little finger whilst motioning glass to mouth. It was a piece of etiquette I soon desisted, though, after I recklessly poked myself in the eye mid-sip.

Watching Karen from across the rattan patio table she appeared deflated. Seeming distant (I knew we shouldn’t have bought such a big table), it was clear she wasn’t overly enamoured with the inaugural dish from our pizza oven. A fact exposed when my spouse started pushing her food around the plate – Only stopping when the food commenced pushing her back.

Even making her aware of a heron egg’s gestation period didn’t raise her spirits. Although, she seemed slightly more interested in how cheeseburgers got their name.

Concerned about this spousal low mood, I pondered as to it’s source.

My missus eventually consumed her pizza, but only after I’d threatened to cancel next week’s visit to Thomas the Tank Engine World if she left any…….. Informing her I’d relay more Steve Wright’s factoids should she fail to eat her dinner also seemed to influence her new found hunger.