There was an ‘interesting’ verbal interaction with Mrs Strachan senior this morning as we climbed into my car while bound for the White Rose Shopping Centre. As we fastened our seat belts in synch, the following discussion took place:-

“I see a bird has s**t on your car window.” highlighted the old lady, while pointing at the front passenger door window.

I looked over at the white avian faeces on the glass to the left of my mum. Not responding verbally, I sighed in frustration while turning the ignition of my trusty old Astra.

“Why is bird mess on a car supposed to be good luck, mum?” I enquired, head turned as I backed out of her driveway.

“No, I meant that you can use the ticket to clean up the bird cr@p!” the septuagenarian Yorkshire lass mused.

I laughed inwardly at mater’s whimsical quip; a mischievous jape of which I should have expected following over half a century in the jester’s company.

Fairly philosophical about the avian defecation on my motor, I told mother – “Between March and end of May you can’t be overly precious about ensuring your motor remains bereft of bird poo, mum…… They are starting to nest and there’s chuffing loads of our feathered friends around”

Then added – “It’s pointless getting uptight about things you can’t do anything about, mum.”

“You could shoot the little buggers!” mum (Maggie) unhelpfully proffered.

“I don’t own a firearm, mum. As well you know!….. Even if I did I suspect random firing skyward at starlings, blue tits, woodpigeons and chaffinches would breach the conditions of a UK gun licence.” I countered patronisingly.

“You’d stop them sh***ing on you car though.” Maggie tendered, still not taking onboard I didn’t possess a chuffing firearm.

“MUM, I HAVEN’T GOT A GUN!” I barked back at mater. Before blustering further “Anyway, trying to hit a moving avian the size of a blue tit, starling and chaffinch would take the gun skills of a sharp-shooter. I’d probably put out most of the neighbourhood windows if I behaved that recklessly!”

“Well at least if you shattered their glass panes your neighbours wouldn’t have to worry about bird sh***ing on their windows!” the Leeds lady dismissively opined.

“Anyway, you might be a natural rifleman. For all you know you could be a latter day Betty Turpin!” Maggie continued unabated.

“No Betty Turpin….. She used to cull Weatherfield avians on Corrie to stop them sh***ing on the hallowed cobbled streets.” replied Mrs S mischievously.

Shortly after that further whimsy from the old lady we arrived at the White Rose Centre. My mum headed towards her temple, the M&S Foodhall, for her weekly consumable shop, while I ventured to Sainsburys for a lottery ticket. 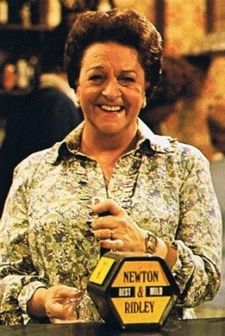