Yesterday evening while scoured the enlightening world of social media, I was surprised by a post I spotted from my daughter Rachel, who’s currently residing in Canada. In the brief message she informed followers that she’d shortly be jumping out of a plane.

A number of thoughts raced through my neurological corridors on viewing my offspring’s short post. Firstly, I hoped Rach had the sense to undertake this daring act with a parachute on her back. Secondly, I expected she wasn’t piloting the plane and her departure wouldn’t result in her passengers plunging groundward. Thirdly, if she was piloting the aviation craft, when the bloody hell did she gain her pilots licence?!

Later in the evening I spoke to Rachel who was full of beans after her adrenalin rush exploit. Although, admittedly I’m unsure why she was eating baked beans during her descent.

My youngest offspring is no stranger to dangerous activities. Previously, she swam in a tank with sharks in Australia, not to mention undertaking white-water rafting, caving and bear balancing in Canada. Along with telling a rattlesnake in Nevada to “Shut the f*** up, you noisy bleeder!” 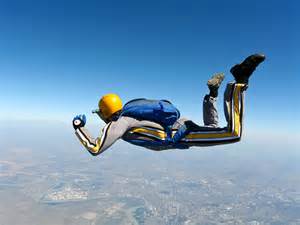 Of all of these acts of daring do, Rach, reckons yesterday’s parachute jump is the most dangerous thing she’s ever attempted in her 24 years. With the possible exception of the occasion she attempted to block my access to Sainsbury’s wine aisle. A foolhardy act on her part in which she sustained multiple injuries from my resultant wildebeest like stampede of fury.

On completion of her parachute jump, I asked my daughter on FB Messenger what was the next adrenalin rush activity on her bucket list, to which she responded “Mind your own business you nosey b*****d!”…… There appears to be something in the saying ‘the apple never falls far from the tree’.

As with her brother Jonny, I’m very proud of the adult Rachel has developed into. I truly miss her when she’s away on her global jaunts. In particular our regular heated arguments about absolutely chuff all.

Disagreements with her mum are a lot less confrontational and ultimately unfulfilling. I personally opine that an argument isn’t worth the paper it’s written on (or not) if it’s peak can’t be measured on the Richter Scale.

My son Jonny is more of a home-bird, not sharing his sister’s want of travel and an adrenalin rush. A calmer more reflective individual, he tends not to partake in dangerous activities such as blocking my access to Sainsbury’s wine aisle.

He is a witty, charming and urbane man, preferring to spend his time with his fiancée Jenny, along with family and friends than gallivanting around the world balancing bears and chasing swordfish, akin to his younger sibling’s exploits.

People often ask where my daughter gets her daredevil character from. After all, they comment, her mother and I are quite reserved, undemonstrative individuals content to avoid the existential fast lane.

It’s a question I struggle to answer. Maybe it’s from one of my mum’s side of the family who was Roundhay Russian Roulette champion for three years on the trot in the late 1950’s. Risky competitions in which he literally was the last man standing…… Ironically he came to an abrupt end when, on his way home after his last victory, he was trampled by a runaway horse in Oakwood.

Alternatively, Rachel’s need for an adrenalin rush could come from my wife’s dad. A simple man who enjoyed being circumcised so much he kept having his foreskin sown back on to allow him to undergo the procedure again. This led to the skin getting so stretched it was eventually used to reupholster his leather sofa.

Wherever my youngest offspring has acquired the gene driving her desire for danger, I applaud her spirit, courage and decision not to sit on her granddad’s reupholstered sofa for hygiene reasons!……. Good on you Rach!