One such street party took place in Dorchester Gardens, Low Fell. The south Gateshead cul-de-sac of twenty six houses where I spent my childhood and early immature adult years. A suburban outpost of three-bedroomed semi-detached houses, built in the 1960’s by Leech Homes. Residences with that era’s typical design of the third bed chamber being a box room, along with separate toilet and bathroom.

As a young boy I always assumed the term box room originated due to a paucity of space, rendering them the size of a shoe box. However, after starting to play club cricket as a teenager I concluded the name may’ve come from the lower abdomen protector I wore when batting…… They certainly smelt similar!!!

Having a separate toilet and bath had pros and cons. On the plus side if you were chilling in the bath, there was no worrying you’d have to jump out of the water to let a family member attend to the call of nature. On the negative side, though, the lack of a toilet bowl in the bathroom meant peeing in my bath water more times than I’d have liked.

Anyhow, back to the Dorchester Gardens street party celebrating our monarch’s 25 year reign.

I’ll be honest and say I’ve only vague recollections of the event. I remember the kids were encouraged to dress in fancy dress, although as a 14 year old pubescent schoolboy I misguidedly deemed joining in would breach boundaries of teenage cool.

My younger brother Ian suggested the two of us dress up as Red Rum in a pantomime horse suit. However, our kid was never going to remove my indifference to dressing-up by telling me I’d spend three hours sweating in a fancy dress outfit with my head in close proximity to his flatulent backside.

As I write this I’m not even sure if our Ian (who’d just turned 12) actually donned a fancy dress costume on that day. Like many of the kids from Dorchester Gardens and nearby streets, my 4 year old sister Helen took part. She wore a St Ivel’s cheese triangle, while next door neighbour Judith (aged 12) donned a St Ivel’s cheese triangle packet. Both costumes, if memory serves me correct, created by my old man. 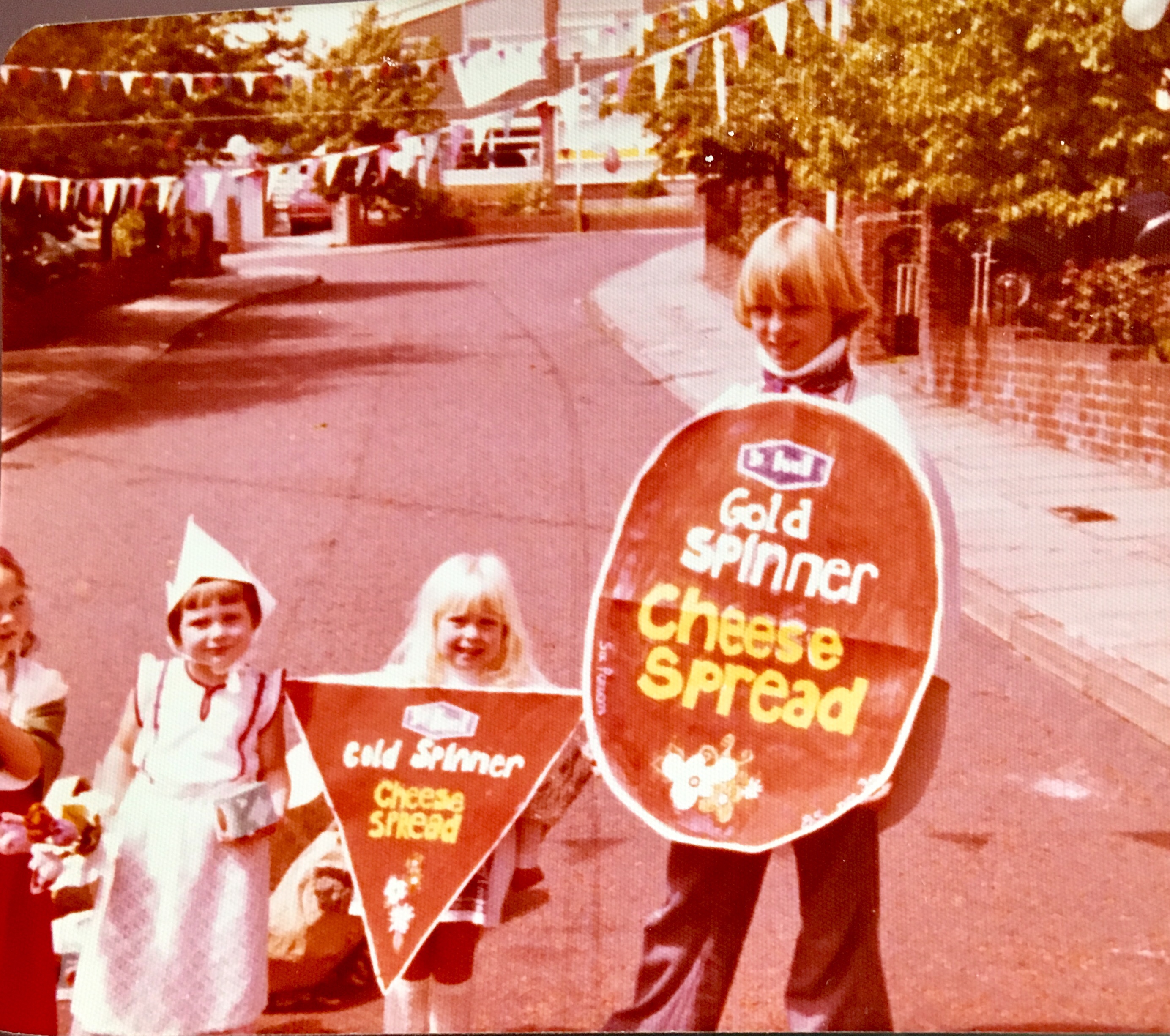 I do recall our Ian for some reason decided to bring an egg whisk along to the party, but don’t recollect who actually organised the event. I’d imagine it’d have been the cul-de-sac’s women who ‘project managed’ the event. People like my mum Margaret Strachan, Moira Galloway, Ena Cowell, Geraldine Holliday, Ronnie Stoddart, Pat Forsyth, Audrey, Hazel, Doris, Mrs’ Dixon/Williamson, Enid Mitchell et al.

From memory we ate buffet food laid out on trellis tables outside the Stoddart and Cowell’s abodes in the middle of the street at the bottom of it’s incline. We probably dined on sausage rolls, crisps, a selection of sandwiches, pork pies and the like. With desserts of jelly. Angel Delight and ice cream.

There were a clutch of street games organised including ‘Pin the Tail on Jimmy Galloway’, which had to be postponed because he’d gone to the Jolly Miller for an early evening pint with my dad, Ken Cowell, Brian Holliday and a host of the other Dorchester Gardens’ patriarchs.

There was also an impromptu game of ‘Help Ian Strachan Find his Whisk’ after our kid mislaid his beloved kitchen utensil. It was later found in my pocket…. God knows how it got there (cough, cough) or indeed how the bloody hell I managed to fit an egg whisk in my jeans pocket!!

Sadly, my epiphany of a street game where we got to eat as many of the Jacob’s Clubs in Ken Cowell’s garage as was humanly possible wasn’t sanctioned by the party’s organising committee…… And possibly Ken (who worked in sales for Jacobs).

After the food and games it was time to judge the winner of the Fancy Dress competition. Despite some fantastic efforts by the street’s kids, including our Helen, Judith, Lindsey Holliday (milkmaid), Aileen Galloway (a robin…. that’s the bird incidentally, not political commentator Robin Day), the winner was an adult.

The victor, George Forsyth, whose policeman’s outfit was chosen by judge Nan Mansfield, from nearby Portland Gardens, for “costume authenticity”. Nan was asked to undertake the role of judge as she didn’t know Dorchester Gardens residents too well, so was identified as a suitable choice from an impartiality basis.

If Mrs Mansfield had’ve been more familiar with the characters in NE9 6UY she’d have known George was actually a policeman and wasn’t even in the fancy dress competition. He’d just returned from work and was watching proceedings, troughing a ham sandwich he’d taken from the buffet, when the event commenced. Mr Forsyth was delighted, although somewhat surprised, with his victory. Promising faithfully to strive for world peace, undertake humanitarian work and to never again utilise the word chaffinch in the wrong context.

All that remained after the announcement of the winner was the presentation of the trophy……. Well, our Ian’s whisk!