Within the past few days I’ve shared a trilogy of narratives (Lunchtime Lounging At The Griddle, …. And The Teachers Get The Money! & Duck!!) regarding whimsical, partly fictional, recollections of the Gateshead senior high school I attended between 1977-79.

This education establishment, which became victim to the wrecking ball a couple of decades ago, going by the moniker of Heathfield. The school whose famous ex-pupils include footballer Paul ‘Gazza’ Gascoigne, orchestra leader John Wilson and TV puppet Basil Brush’s ex-minder Chip Handscape.

Yours truly never made the acquaintance of Gazza or John Wilson, who attended the school after I’d left in summer 1979. I did though once meet Chip in the Beaconsfield pub on Low Fell in the early 1980’s. An occasion he drunkenly disclosed to anyone prepared to listen the tales of Brush’s infidelity and addiction to Pot Noodles.

Gazza or John Wilson won’t have lost a seconds sleep over not crossing paths with GJ Strachan, or indeed have even heard of me. Nevertheless, it’s not something that’ll cause me to take my baton ball home……. See what I did there?…. A conductor and footballer; baton ball instead of bat and ball……. No?….. Blimey, you’re a tough audience!

Anyhow, in today’s narrative I intend to pen tongue in cheek tales about the Low Fell alma mater I attended between the ages of 11-14; prior to my move to the now sadly demolished Heathfield Senior High. This junior high school situated on the cusp of the Chowdene estate where I spent my fledgling years; an establishment which at the time went by the name of Breckenbeds.

Even though the now revamped Breckenbeds buildings are still utilised for the purpose of educating secondary school children, the place no longer bears it’s original name. I’m led to believe when the alma mater ‘took in’ the 15-18 years olds displaced after Heathfields demolition it acquired the shiny new identity of Joseph Swan Secondary School (later to become Joseph Swan Academy).

This new moniker chosen by the Gateshead Education Authority after a lucrative sponsorship deal to name it the Bert’s Pie Secondary School*** collapsed in tandem with Heathfields tumbling walls.

*** – Bert Pie’s shop was a store on Durham Road, Gateshead, which during the 1970s/80s won a string of gongs for it savoury pastries. Including the prestigious ‘Best Pie Shop Whose Owner’s Name Rhymes With Shirt’ award in 1978. Not the mention the 1981 award for Tyne & Wear Store Responsible For Causing Fewest Salmonella Outbreaks.

The latter controversially beating the also nominated Low Fell retail shrine Cranston’s Jewellers, whose owner was understandably apoplectic with rage at the snub as his store didn’t even serve food.

Anyhow, I digress…… As part of this narrative I wanted to paint you a brief picture of a few of the Breckenbeds teachers who’d the dubious pleasure of teaching me between 1974-1977.

Miss Robertson – A portly, gap-toothed English teacher with deep love of literature. On her watch we were given classic works to pour over by such literary gentry as Tolkien, Proust, Shaw, Kipling (Rudolph not Mr) and our dustman Terry Clout. The latter’s back catalogue of prose including the critically lauded ‘Is This Your Hat, Sir?‘, ‘The Allerdene Shops Are Busy Today, Terry‘ and his highly acclaimed five book trilogy ‘What’s A Trilogy Mean, Frank?‘

Mr Young – French and Games teacher who seemed put out that not many of his pupils wanted to play rugby during lessons. Incidentally, that’s in Games lessons not French, a notion which would be quite frankly ridiculous. Had a younger brother (whose name I can’t recall) who was the only kid I knew who’d a beard at the age of 12. To clarify further, this was a false beard; one which Young the younger removed on an evening, attached to a leash before walking it along Kells Lane.

Mr Oliver – A timid, forty-something Physics teacher who I knew from his attendance at the same church as my family, Cromer Avenue United Reform Church. A teacher with a great love of his science, he once attempted to time travel back to 1953 in his Vauxhall Viva. Sadly for him the experiment failed; ending ignominiously with him sitting current day in his car outside Bimbi’s chip shop in Birtley.

Mrs Holmes – A Maths teacher whose Low Fell home in Portland Garden backed onto my family house in Dorchester Gardens, who I’d guess was in her late forties at the time she taught me. A kindly, softly spoken women whose insistence she always navigated when her husband was at the wheel is said to have inspired the invention of Sat Nav (GPS). Keen on handicrafts, she never knowingly overpaid for knitting needles.

Mr Agar – A Games teacher with a resplendently bushy ginger moustache, which earned him the highly imaginative nickname of Tash. Belligerent of approach, his changing room rollockings were frequent and generally delivered with enough bluster to cause severe moustache dishevelment. On one occasion, during the particularly harsh bollocking of a lad called Scott Donnelly for the crime of having a Scottish father and using the word flange, his facial hair temporarily blocked his vision. His wife, who also taught at Breckenbeds, coincidentally shared the same surname but not the moustache cultivating prowess.

Mr Rowe – A young Religious Education teacher who (I think) lived on the nearby Allerdene estate. Whimsical of disposition, his contemporary views on teaching (and life in general) led to him organising a protest against school uniform and seeking out playground buddies called Macca, Spats and The Enforcer. Despite studying for a degree during less inhibited times, claimed never to has born false witness or coveted a neighbours ass.

Ah, the days of good old comprehensive schooling. God only knows how Ofsted would’ve graded Breckenbeds’ if they’d have existed in those days. From my memories of the place, though, I’d like to think it’d achieve a mark of ‘Champion!’. 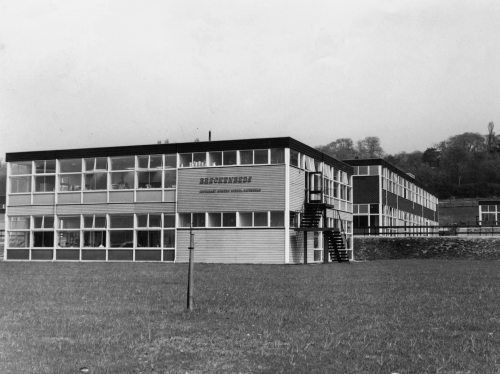 Disclaimer:- Some of the anecdotal details about the above teachers have been enhanced fictionally to aid the narratives flow.