Sunday 29th April – Spent yesterday evening watching a Freddie Mercury tribute act at the local cricket club. The likeness to the late Queen front man was incredible, especially the facial hair, strutting gait and protruding proboscis – And that was just my wife Karen!…… The guy onstage also had a look of Mercury.

When I say t’ turn had a look of Mercury I of course refer to the fact he bore a close resemblance to Freddie Mercury, not that he was a doppelganger of the smallest planet in the Solar System.

Karen and I attended the tribute performance with friends Mike and Claire – The former very kindly getting Karen and my tickets.

On arrival my buddy failed to hide his disappointment at finding the evening wasn’t to see a bloke called Freddie give a lecture on the smallest planet in the Solar System. As such Mike remained unmoved by the singers refrains…… He was also remained unmoved when it came to getting his round, the tight get!

Possessing a vast catalogue of ‘interesting’ Solar System anecdotes, my mucker was hoping the evening would enhance his extensive collection of planetary yarns. Sadly, though, he was unable to add to his ‘fascinating’ tales of how Venus orbits the sun every 224.7 Earth Days and that Jupiter viewed from Earth can reach a magnitude of -2.94…… I’ve no idea what the latter actually means, but it certainly gets my neighbour excited.

Mike also talks of his love for Pluto, but that’s nothing to do with the Solar System. Pluto is his aunt Maude’s dog. Hopefully, his favourite aunt won’t get wind of his desires…… Or indeed won’t get wind, which is apparently so noxious is drives Pluto into another room. 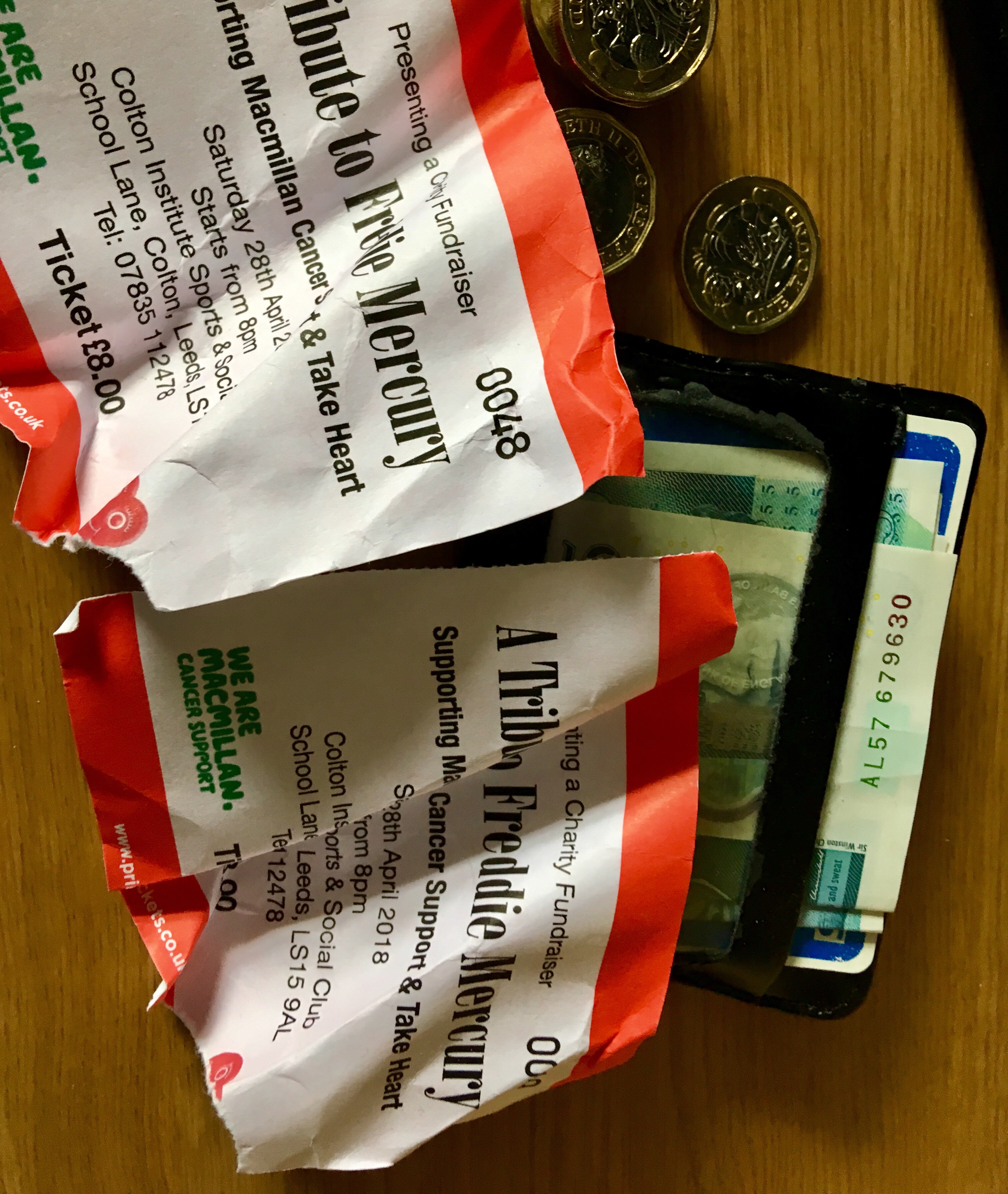 Anyhow, back to the evening which was organised by the local club to raise funds for MacMillan Cancer Support, a cause very close to my family’s heart.

It’d been a few years since I last frequented the cricket club. When the act arrived on the floor in tight white t-shirt, trousers and bright yellow military style jacket, I couldn’t help but think the club’s dress code wasn’t as strict as I recalled it. From recollection, yellow military uniform jackets were frowned upon back then – Only deemed appropriate attire for the Tuesday night meetings of the cricket selection committee.

As mentioned earlier, the geezer who undertook the performance was a doppleganger of the former Queen frontman, showing great enthusiasm adopting the onstage poses regularly exhibited by Frederick back in the day.

The performance contained energy, drive, attention to detail and such vigorous mic stand movements I thought at one point, he might put someone’s eye out.

He beltered out the songs with equal enthusiasm, his voice booming around the club with such ferocity that at one stage my buddy Mike stopped reading his ’10 Interesting Facts About Uranus’ book.

Overall, it was an entertaining performance by ‘Freddie’. An evening of colourful costumes, energetic stage presence and ducking out of the way of an errant mic stand. The singer whipping up the audience to such an extent he even lured undemonstrative old me into singing along to Bohemian Rhapsody – They weren’t the right words but I think I got away with it.

With a pint of Kronenbourg 1664 in hand it was an enjoyable jaunt with some classic music anthems, good company and hopefully lots of money raised for an excellent cause.

Incidentally, if you find ’10 Interesting Facts About Uranus’ book in the Colton cricket club bar it’s my mate Mike’s.