My son Jonny and I undertook further garage clearance in chez Strachan senior on Sunday. Unshaven and dressed to combat the West Yorkshire chill, the pair of us looked like bungling thieves Harry and Marv from the movie Home Alone.

Thankfully, our well-meaning graft wasn’t hampered by an elaborate set of traps set by the neighbourhood youngsters – as was the upshot for the haphazard thieves in the classic Christmas movie directed by Chris Columbus.

Then again there was no reason for kids to mischievously sabotage the contents of my mum’s garage. After all, Jonny and I were there to voluntarily tidy the garage, not steal it’s contents.

We’d have been less than chuffed if during our toil, akin to the buffoons who attempted to outsmart young Kevin McCallister, our hats were set alight by a blow torch triggered by the innocent shifting of a paint tin. Likewise, we wouldn’t have appreciated the weighty metal toolbox residing upon garage shelving landing on our head, following the opening of one of the cupboard doors.

There’d have been further malcontent if the oil and water based remnants in the several paint tins, residing upon the same shelves, had covered us in gloss and emulsion. A consequence of being disturbed by an elaborate pulley system, kicked into life when I innocently switched the garage light on.

Pleasingly, none of the above occurred. Jonny and me completing our clearing task uninjured, with clothing covered in nothing more than a scattering of dust. Although, in the unlikely event little Jake next door to my mum ever reads this, his parents won’t be enamoured that I’ve just given him a few mischief making ideas for when he’s a bit older!

If my brother Ian had have assisted his our Jonny and I in tidying mum’s garage, more than likely there’d have been a scenario of catastrophic paint spills, along with flying tools. In our kids case, though, the carnage wouldn’t be a result of booby traps amongst the garage contents; moreover his inherent clumsiness.

They’d be no malice aforethought at all on his part; all the incidents merely a consequence of him morphing into a bull; the garage his metaphorical china shop.

The sorting and clearing of my mum’s garage contents remains a work in progress. There are still shelves to purge, along with emptying the broken freezer which, I’m reliably informed by mater, contains several hardback books.

It’s an unorthodox book storage facility, but I suppose if you’re not gonna read them it doesn’t really matter if your bookcase used to store frozen pizzas…..At least I think the freezer is broken; hopefully, upon opening the freezer door I won’t be greeted by a collection of books that require defrosting prior to them being fit for purpose.

Unlike previous garage tidying sessions, on this occasion Jonny and I didn’t stumble over any unexpected finds amongst the tea chests, cardboard boxes and shelving. 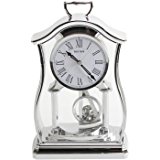 There were several pairs of my late dad’s shoes, old half empty bottles of perfume, vacant cardboard boxes, three half-litre bottles of real ale, along with a hearth clock (still in it’s box) which Jonny joked we should wrap as a gift for a family member this Christmas.

I’ll have to plan a tip visit at some point this week to dispose of all the items that my son and I designated for disposal last Sunday…… Right, I need to bring this narrative to a close as I need to go wrap my mum’s Christmas present……. I wonder if she’ll recognise that hearth clock?!