Five years ago yesterday was a big turning point in the life of my family.

As I recall, we found out this life changing news on the late morning of 2nd November 2010. I was sat in a waiting room at Leeds General Infirmary, whilst Karen underwent a mammogram, following a referral by her GP the previous week.

She hadn’t noticed a lump but, due to changes in breast shape and being plagued by pain in various parts of her body, the GP thought it prudent to get this checked out.

At 11.00 am Karen walked slowly out from the consultation room, where she’d had her mammogram, towards me in the waiting room. She gave me a smile but looked concerned. I smiled back and asked “Ok then. Are we off home?!” not thinking for one moment there would be any issues!

As I’d sat waiting for her, it didn’t even dawn on me that her recent health issues were cancer related. I wasn’t aware of any breast cancer within her family and she couldn’t feel a lump. As a result, I assumed the mammogram would be one more box to tick off in the root cause investigation of her bone pain.

She sat down on the next seat, before informing me that they had found a lump at the back of her breast. We would have to wait around a while longer, so they could take a biopsy to see if the lump was malignant.

Prior to that second in time, cancer had never touched our immediate family unit. It goes without saying, that the week between the biopsy and the results was one of great worry.

Although we hoped the biopsy results eight days later would send our worries back into the ether, unfortunately for Karen within two week she found out she had metastatic breast cancer. It has remained an unwelcome visitor in our life ever since! 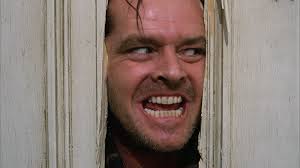 It is the visitor who not only causes physical pain to the patient, but also mental pain to them and their family. The enemy within we can’t throw out, who abuses our begrudged hospitality and waits like a ticking time bomb to strike. Cancer is the rancid unwelcome guest with no redeeming features at all.

Some people do manage to get an eviction order and shift it temporarily or permanently even. However, Karen’s diagnosis was too late for her to apply for one, as it had run riot in other parts. So he has arrogantly sat comfortably in her armchair since with his feet up, goading and messing with our minds!

He’s a sneering, cocky, untouchable presence constantly trying to get the better of her. A control freak seeking full control, who does on some days comes out on top. However, on other occasions our good friend medication steps into the breach, which along with our resolve keeps his influence at bay!

Hopefully one day soon, anyone unfortunate enough to get this unwanted house guest will be able to get that eviction order. Or even better, get to a stage where individuals can undertake informed proactive actions to negate him getting through the front door in the first place! …….. We can all but dream!

I have written before, in an older blog ‘Where The Rainbow Ends’, about 10th November 2010 when Karen was told she has breast cancer, in addition to 17th November when she was informed it had metastasized into her liver and bones. I therefore won’t regurgitate those tales.

The 2nd November, will always be the unwanted anniversary of the arrival of the unwelcome house guest. Despite this, it’s important on that day we, as a family, don’t focus on the fact we cannot get him out of our lives. Moreover as a time to strengthen our resolve, ensuring he doesn’t get the ultimate control. he craves.

We should attempt to recall the positive and happier times in the last five years. Things like holidays, cruises, gigs, theatre shows, operas, our children 21st’s (which we didn’t think Karen would see), weekend breaks and days out in some truly beautiful parts of the UK.

As things stand at the moment, II would say to cancer that, admittedly, he might get the better some days. However, we do get our share of the spoils at times! Most importantly, regardless of anything, he can never take away the good things we did during his five years of mayhem!

Karen has shown unbelievable fight, spirit, courage and dignity since 2nd November 2010. This diminutive, unassuming, selfless lass from the north east of England is one tough cookie to crack! Long may that be the case!

Anyway, I feel it’s time to move onto something more cheerful.

As I write this narrative, it is dank and miserable outside with the sight of water slowly cascading in my eye line. I’m unable to tell if it’s drizzling with rain or whether my toilet overflow is dispensing with the excess water, due to a faulty flush mechanism.

One of next doors cats scans the remnants of the fading kaleidoscope of colour that has been produced by my garden this year. It has done me proud in 2015 (the garden not the cat) providing a feast for the eyes in the last six months or so.

As the moggy pans the gardens with alert eyes of green, I ponder what he may be thinking. Could it possibly be “Goodbye last remnants of colour and you the steadily diminishing leaves of the deciduous shrubs. My covert hunting of the common garden avian has been has been greatly enhanced by the camouflage gifted by your foliage. I will always be in your debt for the beauty and food you have helped provide. ”

Either that or he’s thinking “I wish Strachan would get his overflow leak sorted! The lazy get would rather sit on his arse transcribing his inane thoughts, than stop mother earth’s valuable resources being wasted!” ……… If pressed I’d probably bet on the latter! ……………….. If it’s the former he has a good vocabulary for a cat, although he needs to work on his grammar!

Having said that, I’ve no idea what my little feline chum is thinking. How do I know? I’m not Dr Doolittle and can’t converse with cats, or any animal coming to think of it! For all I know he might have been mulling over the dramatic merits of last nights final episode of Doc Martin, on ITV!

My view as I write. The waters stopped and Marmalade’s done a runner! 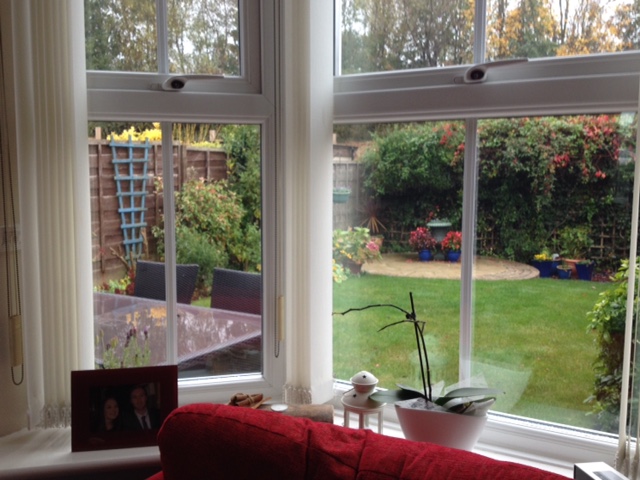 Right on that note I’m going for some lunch. I’ll have to make it myself now that Marmalade the cat has stopped bringing me the birds he’s caught!