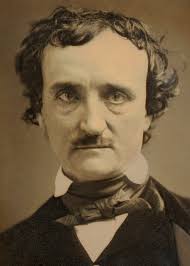 American writer and literary critic, Edgar Allan Poe passed away on this day in 1849, at the age of 40. The cause of death remains a mystery, with delirium tremens, heart disease, epilepsy, syphilis, meningeal inflammation, cholera and rabies all mooted as potential culprits to his demise.

The only thing historians are pretty certain about is that he didn’t pass away due of all of those causes; as championed by maverick literary historian Emo Klutz.

In his controversial paper chronicling Poe’s death, called ‘The Seven Causes’, Klutz theorises that a drunk, foaming at the mouth, syphilis and cholera ridden Poe had a heart attack during an epileptic fit, that caused neurological complications, which subsequently resulted in his untimely death.

Reactions to Klutz’s theory from his peers included “Unlikely!”, “That would be very unlucky!”, to “He’s talking out of his arse!”

Unlike many writers who either shorten their birth name, or use a nom de plume, Poe wrote under a name extended from the moniker he was born with. Christened  Edgar Poe in Boston, Massachusetts, on January 19, 1809. the boy’s paternal lineage was Irish and his mothers English.

In 1811, at the age of two, he became orphaned after his mother died of consumption (his father had abandoned the family a year earlier). Poe was taken into the Virginia family home of wealthy merchant John Allan who, along with his wife Fanny, raised the boy.

The Allan’s were friends of Poe’s mother Elizabeth and it is believed, even though they never officially adopted the boy, it was they who named him Edgar Allan Poe.

His formal education started in Scotland in 1915, then a year later London, after the Allan family relocated due to John Allan’s business interests. Here Edgar showed academic promise, however his displays of insubordination along with a troubled side of his character concerned his foster parents.

Poe was also teased mercilessly in London about having a mother called Fanny, which has an altogether different meaning in England to that of the US. The family returned to Virginia in 1920 where Fanny changed her name to Beaver, much to the despair of the young Edgar.

In 1925 he was left an estimated inheritance of $750,000 when a wealthy uncle passed away, which is worth the equivalent of US’s national debt in today’s money, or the equivalent of comedy actor John Cleese’s alimony payments.

Despite his new found wealth, Poe’s life remained turbulent and uncertain. His relationship with his father degenerated due to continual arguments over Edgar’s money management, not to mention his unacceptable use of the word flange in October 1926.

In 1927, Poe dropped out of his ancient and modern languages course at the University of Virginia, after just a year. He joined the armed forces later that year, although he couldn’t settle and was dismissed from the Army in 1829 for several counts of insubordination.

Once the stability of his young life had been torn apart, Poe decided to follow his lifelong passion and pursue a career as a professional writer and grow a beard.

Despite Poe having early works published, it wasn’t until his poem The Raven was first published, by the New York newspaper The Evening Mirror in 1845, that he received the kudos his literary brilliance deserved.

Hailed by critics as a work of genius, it earned Poe a respected reputation as a serious writer; although his beard growing skills were written off as careless and lacking substance. 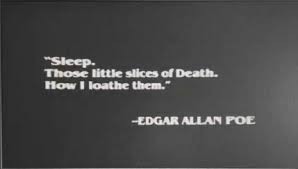 To close my blog I wanted to include a piece about Poe’s legacy. As my English literature knowledge is patchy, I asked my 25 year old son what he felt would best describe the Boston born writers legacy to literature.

He responded “I’ve no flipping idea dad! I’ve only ever read one book and that was Ozzy Osbourne’s autobiography. I’d say that rules me out of making an informed opinion about an author, whose seminal work places him as one of the most important writers in literary history!”

I then asked my 22 year old daughter the same question. She responded:-

“While he pioneered the depiction of horror and madness, he also originated the detective story, in which heightened powers of reason and deduction solve bewildering mysteries. ”

The Murders in the Rue Morgue” and “The Mystery of Marie Roget” were the first examples of the ‘story of ratiocination,’ and their influence can be felt even in modern day crime novels and police procedures.”

I was impressed with Rachel’s articulate and informed critique and told her as much. I pointed out I hadn’t realised she knew so much about Poe and his works.

There was a few seconds silence before she smiled and countered “I don’t, I got it off the net …….. Oh, I nearly forgot. Can you lend me a tenner for my taxi, dad?”