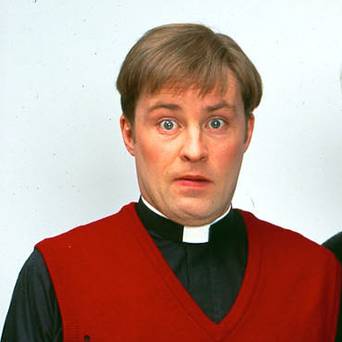 The son of an Irish politician and doctor, he was born in Carrickmacross, County Monaghan. He was schooled at Blackrock College, Dublin where his creative talents were first identified, when he did something creative.

On graduating from National Institute for Higher Education, Dublin with a degree in communications, O’Hanlon took a job as a panel beater for the Ecclesiastical Car Repair company. He soon left though after being sacked for sub standard work and breaking wind in front of a priest.

However, he was said to relieved to leave, as the company’s strict adherence to Catholicism meant a complete ban on the use of condoms at work. No one had sex at work, but the rebellious O’Hanlon wanted the right to use protection if the opportunity arose!

An example of Ardal’s poor panel beating skills which contributed to his dismissal! 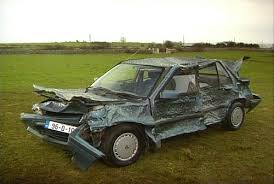 When he questioned why, Nutcliffe responded that he was good at standing up (apart from when he’d been drinking heavily) and had some good jokes, especially the one about the 12” pianist.

O’Hanlon didn’t normally take the advice of his friend, who he deemed him a half wit. However, on this occasion he struck gold, as his standup show blossomed into a successful career for the Carrickmacross born funny man. The only blemish being the 12” pianist joke didn’t get the laughs Nutcliffe had predicted.

Following this success he founded Dublin’s International Comedy Cellar with two friends, in 1994. The main driver for the three men establishing this venue was to ignite the non existent comedy scene in the Irish capital, at this time.

The only real comedy attraction in Dublin, prior to O’Hanlon’s club, was a Guinness juggler from Dun Laoghaire. His act was popular amongst the pubs in the Temple Bar area. He wasn’t a bad juggler, although his act may have been more of a success if the Guinness had been in glasses! 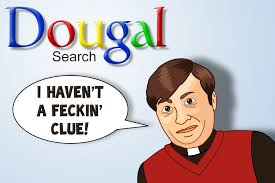 Ardal O’Hanlon’s big break came when he was spotted on the Stand Up Show by comedy writer Graham Linehan in 1994. He was so impressed with O’Hanlon’s performance, he cast him as Father Dougal McGuire in Father Ted; the new TV comedy he’d penned with Arthur Mathews. It was a profitable evening for Linehan as he also bought the rights to the 12” pianist joke.

His portrayal as the loveable half wit Father McGuire, who frustrated Craggy Island parish priest Father Ted Crilly with his poor spatial awareness and a penchant for exacerbating already difficult situations, earned him plaudits and a Top TV Comedy Newcomer at the British Comedy Awards in 1995. 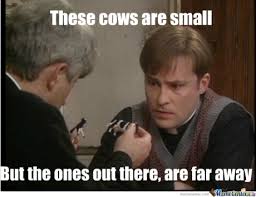 O’Hanlon’s comic acting skills, as the vacant young priest, also earned him a nomination in the coveted ‘Best Thick Shite In A Ecclesiastical Show’ category at the 1995 BAFTA’s.

Although he played a priest, he is known to frown upon stereotypical clichés aimed at his fellow countrymen. As such, it is reputed he is the only Irishman in the world who has never wished anyone “Top of the morning to ya!”

Father Ted ended in 1998 after the death of Dermot Morgan, who played the title character, shortly after the conclusion of filming for the third series.

Despite several suggestions of a ‘ideal’ replacements to play the lead role, writers Linehan and Mathews ceased writing the show and the series died with its lead actor.

Ardal O’Hanlon went on to star in further successful shows both in comedic and straight roles, re-ignited his standup career and has written and presented a documentary on football rivalries.

From my personal perspective, the fellow Leeds United supporter will always be Father Dougal McGuire. The harmless simpleton who greeted Father Crilly’s joyous responses after a phone call with “Bad news then Ted?!”

Happy 50th Ardal! Enjoy your day with family, friends and the Guinness juggler! 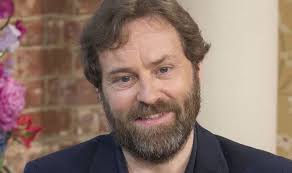