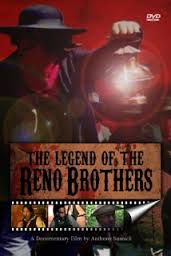 The first train robbery in America happened on this day in 1866. The incident took place near Seymour, Indiana and was undertaken by the notorious Reno Brothers Gang.

It was a dark time to live in the Mid West. Gun laws meant that firearms were easily acquired by reckless, unstable idiots who caused mayhem. Thankfully for it’s citizens, the US learnt from that era, resulting in a more responsible gun ownership policy in the last century, or so!

Lots of the money stolen was never recovered However, the underpants were found by archaeologists during a dig several years later! They now reside in the Lafayette Lingerie Museum in Indiana. Curious visitors are heard to gasp in astonishment at the skill of the archaeologists who lovingly renovated these pants, even restoring the skid marks!

Archaeologists say the discovery of the underwear gives valuable clues into the psyche of the brothers. In particular, it shows that they must have been exceedingly apprehensive whilst perpetrating their crimes.

The boys’ life of crime and poor underwear hygiene came to pass despite receiving a strict religious upbringing. The Reno parents were so rigid with their spiritual beliefs they decreed the boys could only raid one shop in town on a Sunday!

Psychiatrists speculate that the boys litany of crimes were the result of rebellion against the pietistic restraints they endured as children. However, Mid West historians are more forthright, claiming  the five men couldn’t be bothered to do a proper job; so they took the easy money route.

The Reno brothers in the gang had two other siblings Clint and Laura who took no part in their crimes. Apart from Clint, who could also be lax with his undies like his brothers!

Further members joined the siblings in the gang as their notoriety burgeoned. The new blood were enlisted by the Wilkinson and Franklin Reno, who promoted the merits of gang work at a hotel recruitment fair in Gary, Indiana.

The train robbery, undertaken on 6th October 1866, occurred on the Ohio to Mississippi train line. Here John and Simeon Reno, along with another gang member dressed as wandering minstrels, broke into the express car. They proceeded to sedate the guard with a medley of out of tune ballads, before stealing around $16,000 from a safe.

The three crooks then pushed a larger safe off the train at a destination where the rest of the gang were having a picnic. They struggled to get the larger safe open, although it didn’t help they tried to prise open the door with a chicken leg; after forgetting the dynamite and crow bar. As a result the gang were forced to flee in a hurry, as a large posse approached!

A chicken leg not too dissimilar to the one used during the failed attempt at opening the larger safe! 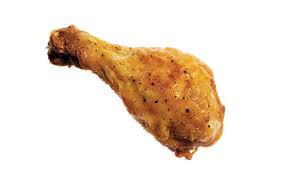 Ultimately, this raid was the beginning of the end for the Reno’s, as the insurers of the safe contents engaged the Pinkerton Detective Agency to track down the gang and the chicken leg.

The Pinkerton agents tenaciously chased the gang around Indiana, Iowa and Ontario (Canada). What followed was a further spate of burglary’s, arrests of gang members and escapes from jail of gang members.

The Reno Gang persisted with their crimes until they had all been killed by the end on 1868.

On the night of December 11, about 65 hooded men traveled by train to New Albany. They marched four abreast from the station to the Floyd County Jail where the last four remaining Reno gang members were in custody.

Just after midnight, the men forced their way into the jail and the sheriff’s home. After they beat the sheriff and shot him in the arm for refusing to turn over the keys, his wife surrendered them to the mob.

Frank Reno was the first to be dragged from his cell to be lynched; followed by brothers William and Simeon. Another gang member, Charlie Anderson, was the fourth and last to be murdered, at around 4:30 am on December 12. 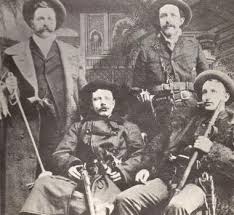 It was rumored that the vigilantes were part of the group known as the Scarlet Mask Society or Jackson County Vigilance Committee. No one was ever charged, named or officially investigated in any of the lynchings.

The chicken leg was never brought to justice!