Unable to categorise the zany sketches, sight gags and Terry Gilliam’s animations, the term Pythonesque was coined to describe their genre of surreal comedy.

The sketches were occasionally interspersed with a continuity announcer telling the viewer “And now for something completely different.”…… He wasn’t wrong!

I was a six year old lad when the show first hit the screens. However, the show wasn’t on my radar until probably two or three series later. I became aware of it when my dad joined the programmes ever burgeoning viewing audience.

Not that many people my dad knew used the word hypnagogic! In fact, I’d bet absolutely no one in Gateshead, apart from the Leam Lane Hypnagogic Society, has ever used the word. I’d certainly never heard of it until a few minutes ago.

Thank god for a thesaurus.com! You might ask why I just didn’t use the word surreal, which would be a good question that I have no real adequate response to; other than I used it earlier, so I tried to avoid repetition. 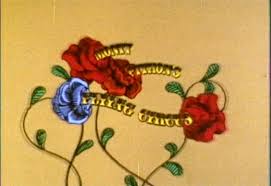 My dad was by no means an avid Python fan, however he did occasionally watch it on its Monday night slot on BBC2. I got the feeling he found the humour a bit hit and miss as he only laughed sporadically! His laughter was interspersed with shouts of “Ian, stop bloody playing football in the house!” at my brother.

I did watch it with him now and again, if I was allowed to stay up a bit later. I laughed heartily at some of the sketches, however some of the sight gags and animation was over my head so I just didn’t get it. So I tended to wander off to play football and smash ornaments with our Ian!

I was too young to understand the seminal work these guys were creating and its place in the evolution of TV comedy. To be fair at that age I don’t suppose I was in the demographic group the show targeted.

Watching recordings now I still find the shows a bit hit and miss, although at least now I appreciate the groundbreaking work these writers/performers bequeathed to the viewers.

It wasn’t that I don’t like Pythonesque humour, as I absolutely loved the spin off movies from the shows, in particular The Holy Grail and Life of Brian. Despite having seen both movies numerous times, I still chuckle heartily throughout when I watch them. Not to mention, on occasion, reciting some of the funnier lines in conversations with my peers.

During a holiday in Spain I read an autobiography of the Monty Python team. Whilst reading this book I received quite a bit of attention from one of the waiters who declared himself to be a big Python fan.

If I was reading the book as he walked past me poolside, he would announce “Theeezz eeez a dead paarrrott!”; in addition to other famous quotes from Python sketches.

He seemed to revel in asking endless questions about the book, which was fine by me initially. However, this got to annoy me to such an extent that on one occasion when he asked me a question I felt like proclaiming “I wasn’t expecting the Spanish Inquisition!”

However, I thought that the irony of the comment might be lost on him, so I gave him a disingenuous smile, answered his question and returned to my book!

In the 1970’s post Python, John Cleese went on to write, with his wife Connie Booth, the brilliant and still much loved sitcom Fawlty Towers. The toils of the irascible, socially inept, hen pecked hotel owner Basil Fawlty was a sitcom that offered a more mainstream type of humour than Python.

I don’t remember what night of the week Fawlty Towers was broadcast. I can, though, recall that during the thirty minutes it was aired the laughter levels within the living room exceeded those of any other show we had seen previously. The family similarly relished the Michael Palin and Terry Jones post Python comic tales in the BBC comedy Ripping Yarns! 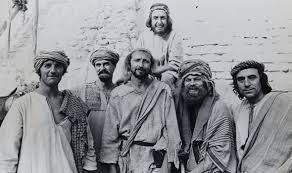 Forty six years ago today the British TV comedy landscape was changed by five Oxbridge educated Brits and an American. Their sketches of dead parrots, cheese free cheese shops, naked men playing the organ and a large animated foot causing destruction in its wake were innovative, fresh and absolutely nuts.

How funny it was is subjective and depends on your personal taste. However, one thing certain is it inspired future generations of comedy writers and proved you didn’t have to write about a dysfunctional family living in a three bed semi in suburbia, or use constant double entrendres, to create a TV comedy!