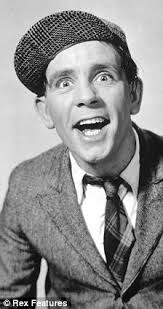 Blimey, I’ve written two really cheerful blogs this weekend! Yesterday I referred to the anniversary of Ronnie Barker’s death; todays is about the passing of another British comedian with a special place in the nations hearts.

Wisdom’s career in show business spanned for around sixty years, but it is the thirteen years between 1953 and 1966 for which he is probably most fondly remembered. During that period he made a series of comedy movies playing lovable buffoon Norman Pitkin.

His comedic performances enchanted his audiences. One of his biggest fans Mrs Geraldine Aimes was so taken with Wisdom’s 1957 movie Just My Luck that, as she left the movies premier, she told waiting reporters “It was ok! Now get out of my way or I’ll miss my bloody bus!!”

In these movies, Wisdom predominantly wore an ill fitting suit with his tie askew and a cap that fit like a pea on a drum. His small stature, amiable nature and the fact he was generally the victim of a spiteful superior meant he gained the audience empathy, that is often afforded to an underdog.

There was always a happy ending though for Norman Pitkin, so the punters generally left the cinema in a chirpy mood. Apart from a Doncaster man, Alan Chuff, who had his wallet stolen as he stood up to cheer at the ending of the 1963 film A Stitch In Time! 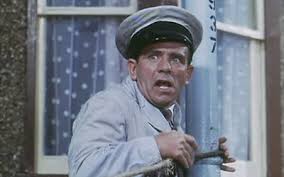 The London born comics popularity, resultant from his slapstick performance in these movies, extended as far as South America, Eastern Europe and my old neighbour in Low Fell called Ted.

Wisdom was a cult figure in Albania, where he was one of the few Western actors whose films were allowed in the country during the dictatorship of Enver Hoxha.

According to an informed source (Ted next door), in Hoxha’s view, proletarian Norman’s ultimately victorious struggles against capitalism, personified by Mr Grimsdale and the effete aristocratic characters played by Jerry Desmonde, were a Communist parable on the class war.

On his visits to their country, Albanians addressed him as “Mr Pitkin” after the character from his films. Although a simple Tiranan women persisted in calling him Mr Bojangles, after mistaking him for American entertainer Sammy Davis Jr!

Wisdom’s stock in Albania was so high he even had a top 20 hit in the country when a song, Big in Albania, he penned with Tony Hawks and Tim Rice reached number 18.

As his popularity blossomed, Charlie Chaplin was reported as saying Norman Wisdom was his favourite clown. Popular circus clown Charlie Caroli was so irked by this he angrily confronted Chaplin in a London West End bar.

Amongst Norman Wisdom’s many accolades he received a knighthood, the OBE, Freedom of the cities of London and Tirana and a hospice named after him following the Chernobyl disaster in 1986.

Growing up I loved his films. I recently saw a boxset of his movies from that era I allude to, which were on offer in HMV in Leeds. I was tempted to buy it but Karen talked me out of it by telling me “Having one buffoon in the house is quite enough thank you!” 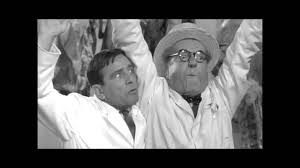 Norman Wisdom died in an Isle of Man hospice on this day in 2010, after a long fight with various health issues. Watching his coffin being taken into the Isle of Man church during his funeral, I half expected to hear a knocking and a faint voice shouting “Mr Grimsdale! Mr Grimsdale! Let me out Mr Grimsdale!”