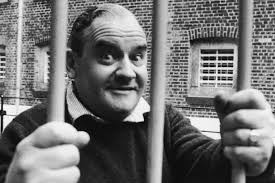 Ten years ago today writer and comedy actor Ronnie Barker passed away. The Bedford born funny man died of heart failure in an Oxfordshire Hospice, at the age of 76.

He met his diminutive long term comedy partner Ronnie Corbett when they played in an amateur production of Snow White and The Seven Dwarves at the church hall, in the fictional town of Thacklethwaite.

In a strange twist of casting the 5ft 8in tall Barker played a dwarf and the 5ft 1in Corbett played Snow White! The clueless casting director, Ainsley Foulkes, also enlisted eight dwarves due to his dubious counting ability.

Subsequently, Foulkes was fired after the production closed in three nights. In an emotional farewell the cast presented him with an abacus and Dopey’s false teeth.

Barker and Corbett’s big television break came on The Frost Report in 1966. Barker’s agent initially turned down the part after mistakingly thinking it was a show about weather. He told the show’s production team his client wouldn’t be comfortable being in the show, as his meteorology knowledge was lacking.

On hearing The Frost Report wasn’t meteorology themed and was, in fact, a show featuring satirical sketches and music, he passed this to Barker who never looked back! Well, apart from when he reversed his car or when pantomime audiences shouted “It’s behind you!”

The Frost Report was the perfect vehicle for his comedic performing ability and writing. The show ignited the careers of performers and writers who went on to be successful artists in their field. As well as Barker and Corbett, this included John Cleese, Graeme Garden, Tim Brooke Taylor, Barry Cryer, Denis Norden and Marty Feldman.

A sketch from The Frost Report about the British class system, featuring Messrs Cleese, Barker and Corbett. 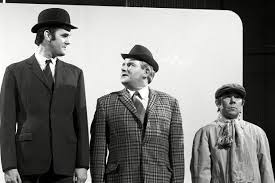 Barker’s fame became assured in the 1970’s with shows like the Two Ronnie’s (aired on the primetime Saturday evening slot) and the prison comedy Porridge.

The Two Ronnies was a highly popular sketch and music show, which further showcased the duos comedic writing, acting and singing talents. As a kid we would all sit together as a family to watch the show. My brother, sister and I would demolish a bowl of crisps and glasses of pop as we’d sit gawping at two bespectacled comics provide proper old school entertainment. 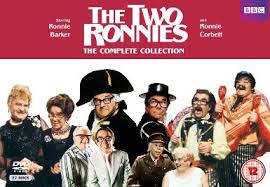 It became so popular that Tourettes Weekly magazine described it as ‘F******g Brilliant!” and ‘It’s better than the shite those tw@ts on ITV dish up!’

As grumpy middle age cynic, I feel sorry for todays younger generation who are entertained on a Saturday nights by raucous crowds cheering on glorified karaoke singers, quiz shows and the tension of finding out if your life is to change forever with a lottery win!

The chemistry of two Ronnies was clear to see, especially in a sketch they did about chemistry! The duo became so close it is said Corbett used to finish Barker’s sentences for him. Well, apart from the one Barker received when incarcerated in Slade Prison, playing Norman Stanley Fletcher, in the BBC comedy Porridge!

I’ve just realised while researching for this blog, that my heading of ‘And It’s Goodnight From Him’ was the same as published in The Sun newspaper the day after Ronnie Barker died. So there you have it my mind works in the same way as a Sun headline writer! God, how chuffing depressing!

I wrote a blog yesterday about The Day The Music Died. Ten years ago today the comedy didn’t die. However, one of the finest exponents of the art did. 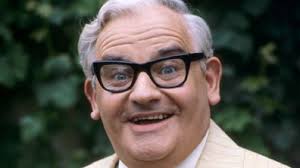