My aural backdrop while today’s lyricals are being waxed is a screeching, attention seeking wood pigeon; along with the distant rumble of tyres on the M62 motorway. Despite the latter’s westbound traffic heading towards several recently locked back down areas, that asphalt corridor seemingly still bustles with Lancashire bound traffic.

Mercifully, the pigeon has just stop its unrelenting caterwauls. In my mind, and with artistic license, I’m imagining this to be a consequence of being pounced upon by a cat on a wall! ‘Caterwauls Abated By Cat On Wall!’ would make an excellent headline, if indeed that scenario turned out to bear basis in fact…… What do you mean it’s crap?…… Blimey, you’re a tough audience!

If the pigeon has been slaughtered by feline, it must’ve been a big cat to subdue these weighty birds. Incidentally, when I state big cat, I of course don’t mean a lion or tiger! Thankfully, neither are native to West Yorkshire, or indeed anywhere in the UK.

Yours truly can proffer without fear of contradiction, with options of either living in a place with cacophonous clamouring avians, or existence in a domain where it’s feasible to be eaten by Simba, the former will prevail ever time.

What I clearly meant when referring to a big cat was a larger domestic feline, of which there’re plenty roaming the neighbourhood. I’d suggest the diminutive black cat, who wandered past me earlier, would struggle to bring down its large grey feathered prey.

Seeing this black cat, which earlier stopped outside the open French door and stared me out for a few seconds, manifested the confusion I have over whether noir moggies are good or bad luck.

Superstition does attribute that colour cat crossing your path leads to fortune of some nature. However, despite dogged research, I’m at a loss at whether this kismet will be favourable or misfortune.

When I say dogged research, I’m probably stretching it a bit. For some reason, GJ Strachan took an investigation route normally avoided like the plague – I asked my septuagenerian mother.

This the woman who, during my fledgling years, advocated a stringent regime of washing behind my ears would negate against King Edward potatoes growing behind my lugs. Advice which at best is bollocks, and at worst complete and utter bollocks!

Anyhow, if it materialises a black cat crossing your path indicates I’ll be in receipt of upcoming poor luck, I’m hoping it’ll be a minor inconvenience. Misfortune like, say, I exit the shower and realise I’ve no towel in the bathroom. Or, lose internet coverage for six minutes……. If I lost the network for seven, I’d be apoplectic.

Over the last 18 months I’ve been hospitalised during two separate life threatening episodes, seen my marriage go south and end up living at my mum’s. Consequently, as it stands, I’d like to be spared any major mishaps further muddying that septic brew of poor luck.

I’m not an unreasonable fella, and don’t expect never to be confronted with the major detritus everyone suffers while journeying this vale of tears. I’m merely asking karma, at this moment, not to throw anything catastrophic, like a seven minute loss of internet coverage…… If that request is ignored, I’ll enter Violet Elizabeth Bott mode and “Scream and scream and scream until I’m sick!”

Right, I’m off for a shower….. Now, should I deliberately not take a towel with me to get the bad luck out the way?!….. What do you think Tiddles?!! 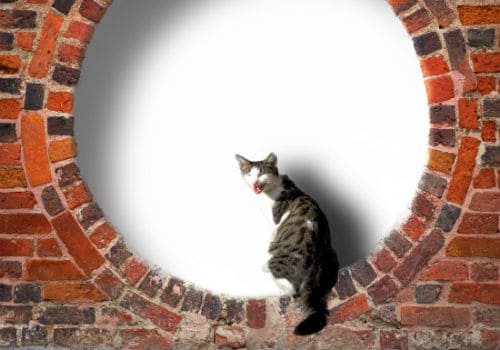