In about two hours I’ll be partaking in only my second ever Pilates class. This re-entering into the contrology studio resultant of, bar finding balancing on one leg without falling over a challenge, thoroughly enjoying my recent inaugural session of the core enhancing exercise.

This lack of stability while attempting to remain upright on a solitary lower limb surprised and slightly alarming yours truly. After all, I used to have really good balance in my fledgling and younger adult days, particularly while partaking in sports.

In my childhood I prided myself of having the running grace, style and poise of my footballing hero, Leeds United’s Allan Clarke. Blessed with long limbs and lithe gait, Sniffer, as the Willenhall born striker was nicknamed after his penchant of sniffing out a goal, oft appeared to glide past opponents with ease.

This was a dexterity I also possessed in my youth, although admittedly to nowhere near as accomplished standard as Clarke. Nowadays, though, it appears my balance when endeavouring to stand on one leg exhibits a robustness of a Jenga block tower perched upon a bucking broncos hind.

I suspect the catalyst to my diminishing stability, like many middle-aged chaps, is my midriff expanding significantly from an era when cutting my toe nails didn’t present the logistical difficulties of contemporary times.

When I wore a slimmer man’s clothes, there was no rolls of fat to contend with when undertaking a quick pedicure. Additionally, in those days I’d ten proper toenails which could be trimmed with one fell swoop of the nail clipper. Nowadays it’s a significantly harder task to maintain my toenails beautification. To quote my son Jonathon, after recently witnessing my uncovered ‘plates of meat’, “Bloody hell, dad. You’ve got toenails like a leprechaun!”

Although Jonny’s observation incorporated an element of exaggeration, it does bear some basis in fact. Two, maybe three, of my toenails appear to grow vertically, instead of horizontally, in a mustard coloured jagged and crumbly mess. If I ever underwent a professional pedicure I’d venture the scene’d play out something like the treatment Jim Carrey received in the movie Dumb & Dumber; angle grinder, sander et al!!! 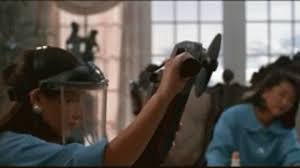 Yesterdays exercise class was a circuits session which afforded opportunity to pound away at a punchbag in sets of four minutes. Such was my need to physically vent, it was an exercise I felt I needed to undertake for longer than four minutes; subsequently revisiting it on a further two occasions.

My three x four minute sessions of pounding my glove enveloped fists into the punchbag a tremendously cathartic outlet. One that, along with the endorphin rush from the other activities, saw me leaving the leisure centre in a decent spirits.

Unfortunately, that raising of emotions didn’t last long as an hour later, just as I was about to commence penning yesterday’s narrative, my bottle of sparkling water exploded on loosening the cap. This spouting of contents predominantly coming to rest across my MacBook keyboard.

As before taking my seat I’d placed the bottle on it’s side, allowing it to roll on the coffee shop tray while transporting beverages to my table, I suppose there was an element of self-infliction to the incident.

I dried off as much of the H2O as I could, but like my estranged wife when asked to back up her futile and more toxic observations, my keyboard was utterly unresponsive. For the next three hours I apprehensively waited for the device to fully dry, praying that my £1100 computer hadn’t been prematurely rendered laptop graveyard in situ.

At 6pm, like Warren Beatty’s character in the movie Heaven Can Wait who declined to prematurely cross over into the afterlife, the MacBook must’ve rebuked the opportunity of residence in the laptop graveyard – Mercifully waking from its coma, putting a halt to my frustrated cursing and allowing my to belatedly journal yesterday’s narrative.

Anyhow, I need to conclude this chapter of my journey to each ends of the emotional spectrum in one day. There’s a Pilates class calling.