As you take over the weekly baton from W/C 12th August, come on then (W/C) 19th August 2019, spill the beans. Let us impatient types, unfazed by spoiler alerts, have a clue what this next seven days hold.

I’m unaware if you do requests; however on the off-chance you do, is there any hope you can bequeath a less dramatic life footprint than your predecessor? Instead, introducing into chez Strachan serenity where last week stood nemeses of uncertainty, discord and fracture.

Last week’s events indelibly branded in my psyche, manifesting a paucity of high spirits fully warranted for seven days that incorporating twenty hours in three separate West Yorkshire hospitals, news of upcoming radiotherapy for my spouse, along with concerns about my mother’s behaviour.

Times of being hospital in situ and my wife’s upcoming treatment already been well journaled in last weeks narratives. Consequently, they’re topics I’ve no intention of revisiting. The latter, though, regarding my mother’s behaviour something I’ve rarely broached at this oft visited literary table.

A tricky subject to write about, particularly as I’ve no idea what’s the catalyst to Mrs S’ increasingly erratic/confused/servile (delete where applicable) behaviour. Subsequently, I don’t know whether to be worried about her health. Or, alternatively, despair at her increasingly annoying attempts to furnish quiet periods by asking me rhetorical questions, in addition to ridiculous enquiries that, to my mind, aren’t worthy of response.

That being said, many individuals may posit it’s my cantankerousness that needs to be addressed in this situation. Not the harmless questioning of a septuagenerian lady who is uncomfortable/insecure on occasion when bereft of vocal interaction.

Those people may well be right, after all my present tolerance levels aren’t high. Worn down by the George Bailey*** years of my life, small talk and other people’s drama over ‘non-problems’, even simply addressing me by my name can on occasion manifest a huge internal sigh or tut.

*** – The era of my life where I’ve predominantly acted as an unpaid carer of others. Although not begrudged, as I’d go to the end of the earth for my family, a frustrating period where circumstances dictate I’ve no acceptable way (for me, anyhow) of returning to a normal existence. That’s if there’s such a thing as a normal existential routine! 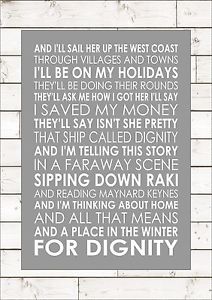 Actually, the more I think about it, it’s totally my problem, not my mother’s….. I’m becoming a right miserable f***er in my rollercoaster middle-age years.

Despite the protestations of the many people who think I need to cheer up, particularly in my social media pictures I post, I’ve not always been a miserable f***er….. In fact, on 14th April 1974 my mum recorded the following observations in her daily diary:-

“Our Gary smiled today! His joy at watching people fall downstairs deeply troubles me!….. Mavis from number 87 thinks my eldest child needs sectioning…….Although a notion not without basis, with him bearing a cast iron alibi (apparently he was pushing Audrey from number 96 down her stairs at the time), I’d like proof it was him that pushed Mavis before casting him in a remake of ‘One Flew Over The Cuckoos Nest’!…… Something I’m keen to avoid with his confusion about clockwise and anti-clockwise issues!”

Within her journals, on 15th June 1977 mater also made reference to me being in a chipper mood. According to her chronicles from that year, titled ‘Do You Think My Arse Is Studded With Diamonds’, she reports:-

“Gary has started looking happier of late. He seems particularly chirpier, although redder of face, on Monday and Thursday tea-times after watching Lesley Judd on Blue Peter in his bedroom…….. God bless Biddy Baxter and the wholesome affect of BBC TV children’s current affair shows.”

Hopefully W/C 19th August 2019 can have the same affect on my fraught emotions as Lesley Judd did 42 years ago!