Today would have been Red Buttons 99th birthday. To clarify, I’m referring to the late New York born actor/comedian, not the remote control button you press to acquire BBC iPlayer.

Born Aaron Chwatt, he changed his name to Red Buttons due to his agent having a speech impediment*** whereby he pronounced ‘ch’ as ‘t’. Red feared casting directors may be reticent to employ an actor whose agent introduced him as Aaron Twatt.

He chose the name Red Buttons as a stage moniker as he wanted his pseudonym to contain a colour and a word for fastening clothes. Originally he wanted the name Orange Velcro, but that plan was scuppered because that stage name was already taken by a balloon bender from Wichita, Kansas.

He chose Red Buttons after an epiphany while food shopping in Walmart, when it was alleged god told him “Choose the stage name Red Buttons and you’ll never look back!”

That’s how the story was passed down, anyway. However, as the voice actually told him “Toose the stage name Red Buttons and you’ll never look back!” it’s suspected it was in fact his manipulative agent, speaking from hidden behind a display of baked beans tins.

Regardless of whose voice it was, he picked the moniker suggested in this epiphany and the New Yorker never did look back; embarking on a glittering career where he received many plaudits……. Although not looking back meant reversing his car out of the driveway was an unnecessarily dangerous activity!

The first time I became aware of Red Buttons was when I saw the movie Poseidon Adventure on TV in the mid 1970’s. In it he played a timid, red headed haberdasher called James Martin.

Coincidentally, British TV chef James Martin once played Red Buttons in the drama Red Buttons Makes A Souffle…… If you want to watch that it’s available by pressing the red button for BBC iPlayer…… So, to summarise, you can get Red Buttons on the red button.

In the Poseidon Adventure, Buttons character was a shy, meek man who, despite being able to knock up mean soufflé, couldn’t swim. His portrayal as this man who was scared of his own shadow, won him a BAFTA nomination in 1972 in the ‘Actor Requiring Buoyancy Aids’ category.

Surprisingly, he wasn’t successful in the award for ‘Entertainer Named After A Colour and Fastening Device’ category, which was snapped up by Orange Velcro.

Red Buttons with Shelley Winters (below) in The Poseidon Adventure – “Did you know my real name was Aaron Chwatt, Shelley?”

Seriously, though, the copper topped actor did win an Oscar for ‘Best Supporting Actor’ in 1957, for his role in the movie Sayonara.

In the movie he played an American soldier stationed in Japan. His love for a Japanese woman resulting in Buttons’ character being torn with the racial and society pressures between American and Japanese cultures.

Red Buttons’ character American pilot Joe Kelly falls for Japanese dancer Katsumi, who he meets in Kobe, Japan. Theirs was a forbidden love like Romeo and Juliet, or Keith Harris and Orville.

I’m not going to spoil the ending of the movie for you. To be honest, I couldn’t even if I wanted to because I’ve not seen it!

Joe Kelly (Red Buttons) with Katsumi in Sayonara (below).

The movie won 4 Oscars (which included gongs for Buttons, Keith Harris and Orville),  opening in cinemas to the following critical acclaim:-

Buttons achievements in the field of entertainment resulted in him earning a star on the Hollywood Walk of Fame. Despite that accolade and winning an Oscar, some claim his biggest achievement was in 1967 when he found a New York taxi driver’s anecdote interesting.

In 2006, at the age of 87 Red Buttons died of complications from high blood pressure and being overly pressed when his batteries were low. He was at home in Century City, Los Angeles with family members when he passed away.

Happy Birthday Red Buttons! An affable man who contributed towards enhancing the existential journeys of many.

I’ve not seen many of his movies, but as he looked like Leeds United’s greatest ever captain, Billy Bremner,  I’ll always count him amongst my favourite actors.

Red Buttons, with the Inter City Fairs Cup in his playing days for Leeds United, 1968 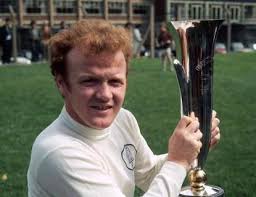 *** Disclaimer – In all probability, Red Buttons agent could pronounce ch’s….. My anecdotal use of him pronouncing it as a ‘t’ is fictional and was added for comedic effect.