It’s 2.13pm on the 22nd December. An elderly chap is playing ‘Have Yourself a Merry Little Christmas’ with enthusiasm on a grand piano in the foyer of St James’ Bexley Oncology Institute. He played with gusto earlier, but he isn’t now as his Swedish pal has just gone for a coffee.

Looking at him, I’d guess the old guy has probably witnessed over four score Christmases throughout his life.

He’s now moved onto the melody for the song ‘Lady is a Tramp’, famously sang by Frances Albert Sinatra in the musical movie Pal Joey. I’d be lying if I said it wouldn’t benefit from Old Blue Eye’s vocal accompaniment. However, what music score wouldn’t?!

That being said the octogenarian is a very accomplished pianist. He plays the music in an allegretto tempo similar to that of an old school music hall player. A technique I recall that was adopted by late pianist Mrs Mills in her sing-along tunes of the 1960’s/70’s.

Known by her stage name Mrs Mills, as opposed to her full married name of Gladys Mills, she spent time in the 1960’s recording at the Abbey Road studios in London. An era when she was a stable mate to The Beatles, who shared the same recording facilities.

The polar opposite of the Fab Four’s cool, she attracted a highly contrasting demographic audience to the Liverpudlians. There were no screaming hordes at a Mrs Mills gig…… Well, apart from during a 1968 London concert, after a spider was spotted by members of the Chiswick Arachnophobia Society in the audience.

I recall watching the London born keyboard tinkler in a 1970’s episode of The Morecambe & Wise Show. To this young boy, she seemed an unlikely celebrity who’d have looked more at home playing an upright piano in the parlour of a 1950’s family abode.

Despite appearing to me an aged woman, she was only 59 when she died of a heart attack in 1978. She wasn’t lucky enough to have achieved the mortal longevity of the guy playing his heart out twenty yards away from me. 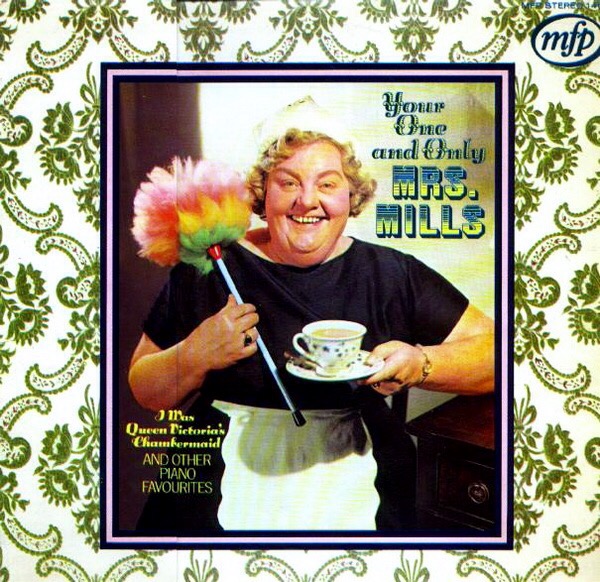 The old fella is now playing a tune I’m not familiar with. As he sits dwarfed by the nearby 10ft Christmas tree in the foyer, appreciative patients and their families donate into the Yorkshire Cancer charity tin perched on his piano.

His art brings a festive serenity to the oncology wing’s atmos. A noteworthy calm in a location that by its very nature increases individuals awareness of their own mortality.

That being said the calm may be railroaded if the Chiswick Arachnophobia Society turn up as I’ve just seen a spider hanging on the tree!

Changing the subject somewhat, I read today on the website of the Highly Inaccurate Fahrenheit Conversion Society that Christmas Day in Leeds will see us basking in temperatures of around 13 degrees Celsius (4000 degrees Fahrenheit).

So it looks like it’s going to be another unseasonably mild Christmas.

How long will it be before snow covered, Dickensian views no longer adorn our festive cards, as they no longer reflect 21st century yuletides?

Is it inevitable they’ll soon be replaced with an updated scene of someone queueing outside Poundland in their shorts and sunglasses? ……. Or perhaps the production of cards adorning Santa slapping on the factor 30 sun cream?

My dad and I are moving downstairs now to where he will receive his second last radiotherapy session of the penultimate weeks treatment. With this in mind I’ll bring this blog to a close.

I’ll also bid a fond farewell to the octogenarian piano player, who has contributed towards making it a soothing writing ambience for yours truly.