I picked my brother Ian up from Leeds rail station this morning. When I met up with him, he was in good spirits as he’d written some song lyrics on his journey south from Newcastle. My younger sibling hasn’t shared his musical poetry with me yet, although I can’t wait to hear his 2016 Christmas song.

Apparently, the work in progress title is ‘I’m Getting Shoes for Christmas’ which according to our Ian is an uplifting festive sonnet, although as it doesn’t refer to shoes in any verse, he may amend the title.

He couldn’t elaborate on the lyrics when I initially met him as he was bursting for the toilet. So instead of peeing gratis on an East Coast train, he dashed off to pay 40p for the honour of using a cubicle at Leeds station.

As I stood waiting for him in the foyer of West Yorkshire’s biggest station, the concept of paying to answer the call of nature made an unscheduled journey through my neurological corridors.

In particular, I thought about the harshness of paying 40p if you turn out to be constipated. I don’t know much about civil law, so am not sure where you stand on this conundrum. Are you entitled to a full or partial refund under the circumstances of being unable to ‘go’?

Technically, you could argue that as you haven’t used any water to flush or toilet paper, which you’ll have paid for in your entrance fee, you should receive at least a partial refund. I know 40p isn’t much money to lose, but it’s the principle of the thing, ie not getting the service you paid for. 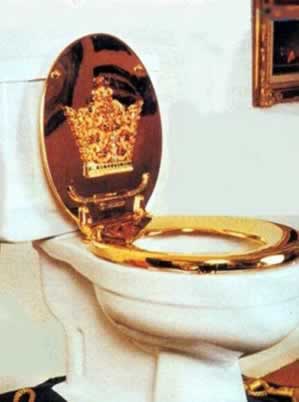 Personally, I think its a bloody cheek having to pay to answer the call of nature. Where will this money generation finish? Will they start selling ‘I’ve peed at Leeds train station’ t-towels, or ‘I ran out of toilet paper in cubicle 3’ mug to achieve additional finance?

How long before we visit a home where we encounter a fridge adorning a magnetic with the words ‘Leeds railways toilets. For those days you need to s***e through the eye of a needle’?

Seriously, though, it leaves a bad taste as well as smell, charging the public to urinate or defecate. I particularly feel for people trying to find the coinage to put in the payment turnstile, when really bursting to ‘go’.

How many have accidents and don’t get to the cubicle in time to empty bladder or bowels? I don’t know, or am interested enough to contact Leeds station to ask “How many people have peed themselves by not reaching a cubicle in timely fashion?’

Anyway, my musings about paying to use the ‘john’ (as our American cousins call it) ended when my younger brother appeared from the Leeds station lavatory. The conversation then turned back to my brother’s Christmas song ‘I’m Getting Shoes for Christmas’, even though he isn’t.

As we walked towards the car park, Ian advised he’d not written the musical accompaniment yet for his moving prose, as the train guard had earlier confiscated his guitar after he’d accidentally poked the old man sat adjacently in the eye.

When I asked him what sort of melody he was looking to achieve, my bro belched, before responding “I don’t really know, Gaz…….. Oh, I nearly forgot, I’ve just bought you this fridge magnet as a thank you for picking me up!”