Karen underwent a test this morning, as part of her latest tranche of investigations scheduled to identify ongoing issues resultant from her illness.

On checking her appointment letter this morning, I became aware that the investigation staff wouldn’t be able to undertake the test if her blood pressure was too high at appointment time.

With this in mind, I promised my diminutive spouse that I’d be on my best behaviour this morning. This included no wind ups, no silliness and no shouting “Malingerers!” while bored in the waiting room.

It was the very least I could promise to mitigate against Karen experiencing hypertension at an inopportune moment, leading to a subsequent cancellation of her appointment.

To help fill in my free time, negate my boredom and distract me from irritating her as we waited for her appointment, I decided it would be prudent to take something along to hospital to occupy my easily distracted mind, before and during my Mrs’ diagnostic examination.

So just prior to leaving home I ventured upstairs, returning a minute or so later with my big bass drum strapped around my shoulders.

I was taking the drum for distraction purposes to allow me some much needed practise in the Leeds General Infirmary (LGI) cardio investigation waiting room. This was desperately required for my upcoming involvement in the ‘Garforth & District Noisiest Man’ competition.

Karen saw the drum as she joined me at the door and with a disapproving look made it quite clear she was unimpressed with my idea to occupy myself..

“Don’t be so bloody stupid. You can’t play a big bass drum in a waiting room full of people awaiting cardiology investigative tests!…. The noise would be far too prohibitive!” she scolded.

A big bass drum – Apparemtly, practising the instrument in hospital waiting room’s is frowned upon! 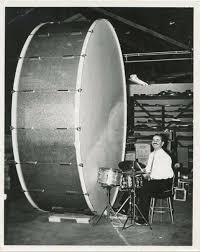 “I could take my headphones to reduce the noise levels for me.” I mentioned, trying to find a solution to the complaint of my Mrs.

“That’s no good you berk!…. Everyone else would still be able to hear it and you’d send their blood pressure through the roof!” Karen barked in reply.

With my practise for my upcoming competition spurned, I tutted and took the drum back upstairs. A minute later I commenced my descent back down the steps towards my Mrs at the foot of the stairs.

Halfway down the stairs he took one look at me carrying a trumpet, sighed, shook her head and muttered “For god’s sake!” in frustration. Before adding “Bring something that’s not a music instrument you fool!”

I was offended by her tone, but to keep the peace I took my trumpet back upstairs; returning shortly afterwards with my iPad.

As we headed toward the LGI, the atmosphere was a bit fraught in the car. Karen was irritated by what she deemed as my idiotic choices to occupy my time in the waiting room. Meanwhile, I was in a huff over her overreaction to me wanting to practise my musical instruments.

We arrived at the LGI shortly after 10am; around 25 minutes early for my musically unsupportive spouse’s appointment.

As we took our seat in the waiting room, Karen asked if I wanted my IPad, which she had in her bag. I declined, telling her I’d get it later.

A moment or so later Karen and the other patients all looked around with displeasure to see where the recently commenced quacking noise was emanating from……… How was I to know that a duck whistle was a musical instrument!! 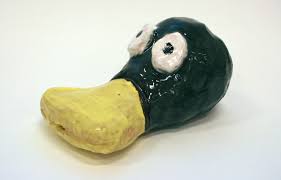