In a rare act of spontaneity, I booked a last minute theatre trip for my wife and I to see the show Guys & Dolls last night.

To enhance the surprise for her I used a cunning ploy to keep the plans from her until as late as humanly possible…… I just didn’t tell her!

Actually that isn’t strictly true. I did give Karen two snippets of information about our forthcoming evening. The first being the night out would incorporate a song and dance show and secondly that it was a much loved musical full of pathos and ethos.

My diminutive spouse looked slightly crest fallen after hearing these clues, confiding in me that ‘Three Musketeers – The Musical’ wasn’t really her cup of tea.

Endeavouring not to divulge too much more of my covert social plans for the evening, I informed Karen it wasn’t ‘Three Musketeers – The Musical’. However, not being able to ‘hold my own water’ I then gave her a further clue that it related to something that rhymed with ‘Trys & Trolls’ and it’s wasn’t the rugby league extravaganza ‘Eddie Waring – The Musical’.

The look of disappointment hung around the face of my Mrs, like a mullet on a cree….. How the heck was I to know that my other half desperately wanted to see ‘Eddie Waring – The Musical’?…… I’m not a chuffing mind reader!

Incidentally, I’ve no idea what a mullet on a cree looks like but Karen’s dad, who spouts these nonsensical colloquial platitudes, assures me it’s like a disappointed face.

Ordinarily, I don’t respect anything he says, however in the absence of a more suitable simile I’m gonna use it!

If it had been another of his colloquialisms, such as “I’m ganning t’ the netty to dipsy, dapsy do!” I’d have been less inclined to include it in my narrative…… Although I think I just have!

Anyway, when we got to the 138 year old Leeds Grand Theatre, we stood outside below a 6ft sign with the words ‘Guys & Dolls’ plastered over it. As we readied to ascend the carpeted steps, Karen said to me “Well then. Are you going to free me from the suspense? What we here to see?”

I pointed above our heads at the shows name in lights. Regrettably, Karen’s gaze didn’t match mine and she stared vacantly towards the top of the imposing theatre’s roof.

“You’ve not dragged me all the way into Leeds city centre to show me two pigeons procreating on a 19th century theatre roof have you?” she quizzed in a somewhat terse manner.

“Of course not!” I mused, before adding with tongue firmly in planted in cheek “That’s merely the warm up act!”

I smiled back at my selfless wife, relieved she no longer had a face like a mullet on a cree, and told her she was welcome.

“What’s it about again?….. Is this the show with the song ‘Sound of Music’ in it?” Karen bafflingly queried.

I say bafflingly as I’d assumed with her desperate need to see this 1950’s show, adapted from a Jo Swerling/Abe Burrows book and scored by Frank Loesser, she’d be up to speed with the plot.

“No, the song ‘Sound of Music’ is in the show ‘The Sound of Music’. I believe ‘Guys & Dolls’ is a story of post WWII Noo Yark.” I informed Karen, whose uncharacteristic display of ignorance was surely a prank!….. Wasn’t it?

“I understand it’s a story of gambling, drinking, redemption, salvation, boy meets girl, boy falls for girl and girl falls for boy. All the while a rotund chap is told to sit down and not rock the boat.” I went on.

“Actually, that sounds a right load! I’m off to get a better view of those pigeons!” my spouse countered in a shallow manner, of which I’d not witnessed before. 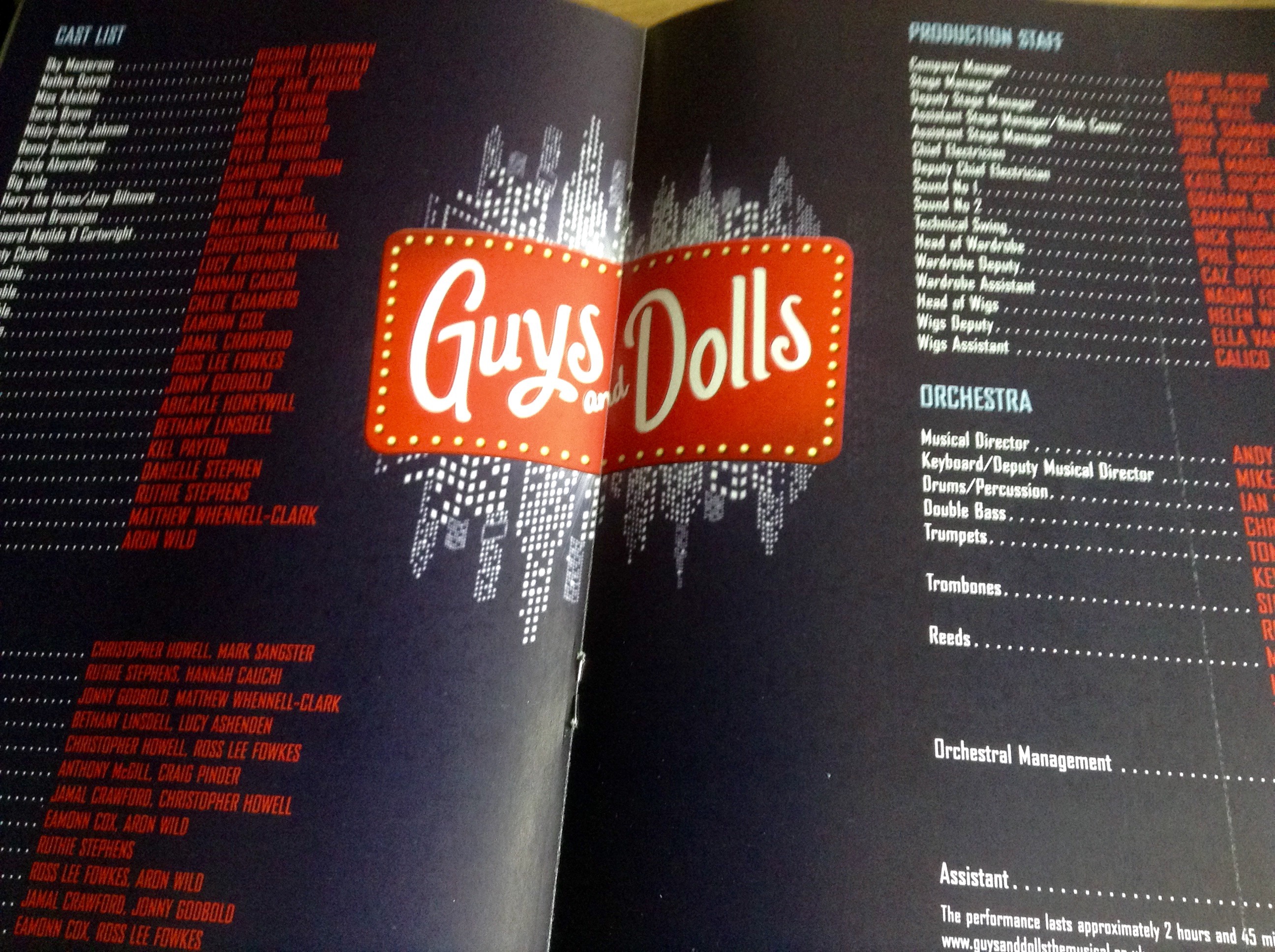 I eventually talked her around and, as the West Yorkshire clouds rained over us, we gained sanctuary in the theatre built when Queen Victoria reigned over us.

We were royally entertained by a skilled cast in a slick, colourful, well choreographed show; which includes tunes that are amongst many peoples musical theatre favourites.

Listening to lead actor Richard Fleeshman sing reminded me of a younger Harry Connick Jr around the early 1990’s . His voice is not that of Sinatra, but then again no ones is! The Connick Jr comparison is meant as a compliment though.

When watching Fleeshman, I also couldn’t help thinking “Blimey, I used to fancy his mother on Brookside and Corrie. I must be getting old!”

Another thing I’ll take from what was predominantly a good evening was the memory of a woman in the Upper Circle breaking wind halfway through the song ‘Luck Be A Lady’.

Ironically, this occurred as the song lyric reached the words “Luck if you’ve ever been a lady to begin with. Luck be a Lady tonight.”

To sum up, it’s a great show, talented cast and entertainment fit for the most discerning theatre goer…… And that was just the pigeon warm up act!!