As a young lad I was a great deal more inquisitive than I’ve been in adulthood. Free from the distractions of paying a mortgage, working shifts and providing for a family of four, my boyhood inquiring mind was given carte blanche to roam, retrieve and expand.

For example, when my parents first moved us from Leeds to Gateshead, in the late 1960’s, it baffled me why all the other kids seemed to be called Ben, even the girls. It took a period of investigation, head scratching and asking someone, before I sussed the adults were actually calling their children bairns not Ben……….. Well apart from the lad in the next street called Ben.

As a young boy, I had a interest in cars, although that diminished somewhat around 1970. My brother Ian and my fledgling interest in cars spawned after we saw the movie Chitty Chitty Bang Bang.

It inspired us into asking our dad to add wings to his Ford Consul, so we could fly around Europe like Caratacus Potts, his kids and heiress Truly Scrumptious. Unfortunately, dad refused, citing some lame excuse about a Consul’s weight ratios not being conducive to flight.

After us badgering him for days, he did organise a visit from the Chitty Chitty Bang Bang child catcher who abducted our Ian. He promptly returned him two days later, after my brother had smashed all his ornaments playing football!

Ian and my love of cars was never the same after that. Our main interests became football, cricket, fighting each other and hiding from mum after we’d broke another ornament.

Instead we procured a decent knowledge of football clubs, players and stats which we would regularly bore people with. …….. How the hell was I to know my uncle Bernard wasn’t interested in what Leeds striker Allan Clarke ate for his breakfast?!

Allan Clarke – My uncle Bernard couldn’t give a shiny shite what he had for breakfast in the early 1970’s …… or now to be honest! 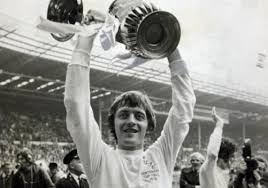 Yes, I learned a great deal as a kid from being inquisitive. However, there were things that remained unanswered no matter how much I sought an answer.

The main one was “What the hell was the barber of Leeds Utd’s goalkeeper, David Harvey, thinking when cutting the Scottish internationals hair prior to the 1972 FA Cup Final?!”

It is a mystery that will never be answered, like the real killer of JFK and who ate most of my brother’s Terry’s Chocolate Orange when he was asleep on Boxing Day morning, 1971 ……. (cough, cough)!

My real problem with Harvey’s haircut was not just the terrible fringe, which made him look like Jim Carrey’s character in Dumb and Dumber, but the fact he was walking out for the Centenary cup final at Wembley representing Leeds United looking as though he’d had a lobotomy. 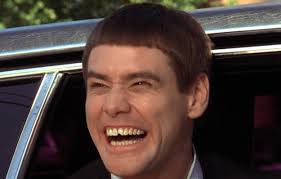 When Leeds were presented to the Queen prior to the game they wouldn’t have looked out of place wearing white coats next to Harvey, instead of their all white football kit! …… As an adult I now picture a scene where, once Abide With Me and the National Anthem are out of the way, ten men in white coats chase Harvey around Wembley with fishing nets.

Ironically, Harvey might have looked simple but it was the goalkeeper he replaced for the game, Gary Sprake, who generally played in big games as though he was wearing a straight jacket!

David Harvey (far right in green top) ……….. Yes, believe it or not, he did pay for that haircut!!

David Harvey’s haircut in that game left scars. Mum got wind of this and started using “If you two don’t behave I’ll get your hair cut like David Harvey!” as a tool to keep us both in line.

Our Ian said he’d rather be abducted by the child catcher from Chitty Chitty Bang Bang again than have his haircut like Harvey. As the child catcher had no ornaments left to break, that tells you a lot about how much the haircut freaked our Ian out!

I have a cousin who scored a goal against Harvey in the 1980’s. It was some achievement when you bear in mind he was hidden behind a sofa at the time!

The sofa my cousin Jon was hidden behind when he scored against David Harvey! 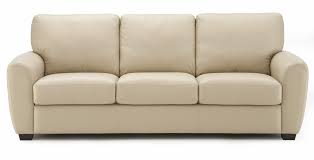