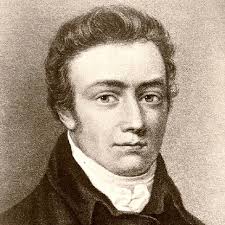 English poet Samuel Taylor Coleridge was born on this day, in 1772, in the Devon town of Otter St Mary. He was the youngest of Reverend John Coleridge and his second wife Anne Bowden’s ten children.

Coleridge was said to be a reasonably well behaved child whose crying only kept his mother up once as a baby. Unfortunately for her it was from 3am on February 3rd 1773 until 6.17am on April 4th 1774.

As a child growing up, he was a loner who “took no pleasure in boyish sports”. Instead his preference was to exercise his mind, which resulted in an avaricious appetite for reading books at an early age.

Following the death of his father, the eight year old Samuel was sent to Christ’s Hospital School in London. He boarded here and was where his literary prowess blossomed. He was a pragmatic lad who, despite his misgivings about certain aspects of the school, was thankful that at least his surname wasn’t Dinglebert. Initials of STD are not something you’d want whilst being educated at boarding school, or indeed a surname like Dinglebert coming to think of it!

In 1792, Coleridge continued his education at Jesus College, Cambridge. Here he was introduced to radical political and theological ideas, such as noodles hydrate more effectively if you add more boiling water and leave for longer than two minutes.

He was introduced to this more radical ideology by a fellow poet, Robert Southey His influence over Coleridge was such that they hatched a plan to set up a utopian commune called Pantisocracy in the Pennsylvania wilderness.The project was soon abandoned after noodle deliveries became too sporadic. Both men agreed you cannot have utopia without noodles.

Coleridge’s literary influences are said to be Shakespeare, John Milton, Robert Burns and Fanny Burney. The first three will need no introduction, however Burney will be less familiar. She was the author of the 1778 novel Evalina, who procured her curious pen name from her habit of sitting too close to the fire when writing.

Fanny Burney………… She was a careless lady where health & safety was concerned! 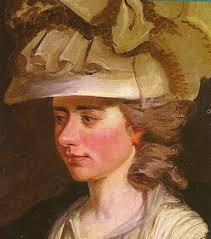 In his song Wonderful World, singer Sam Cooke revealed that he didn’t know much about history, biology, French and science. I don’t know much about poetry, although I have to say there is something quite evocative about Coleridge’s poem Kubla Khan. I particular like the style of writing at the commencement of his composition.

The lines I allude to, chronicling a visit to Gengis Khan’s grandson’s palace, are as follows:-

In Xanadu did Kubla Khan

Where Alph, the sacred river, ran

Through caverns measureless to man

Down to a sunless sea.

A while back I heard a reading of the full poem by late actor Richard Burton. Projected in a strong Welsh lilt his delivery brought the poem to life. It evoked idyllic pictures of a meander around the summer palace and gardens of the Mongol ruler. A bit like a Cadbury’s Flake advert without the beautiful girl and a chocolate bar…….. Actually, coming to think of it, its didn’t evoke any pictures similar to a flake advert; so scratch that simile! 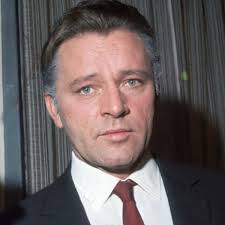 For as much as I like writing, I’m not well read and I have never paid poetry the attention and respect it deserves. Samuel Taylor Coleridge said of languages and words:-

Language is the armory of the human mind, and at once contains the trophies of its past and the weapons of its future conquests.

Paul Weller once wrote that “Power is measured by the pound or the fist!” I think that lyric underestimates the power of the pen, especially when you bear in mind the influence spoken and written word has on all aspects of life.

Words are utilized to create laughter, tears, sadness, fear, inspiration, perspiration and lots of other words that end in ‘ation’. Their influence infinite in the ever turning cogs of economy, marketing, communication, health care and diplomacy. Language is utilized for comforting in therapy, counseling and the re-assurance of a troubled mind.

It is also a key element of sport from coaches instructions, organising team mates to crowd chants. Where would we Leeds fans at Elland Road be if we couldn’t question the parentage of the referee every two weeks?

To close I wanted to include Richard Burton’s evocative reading of Coleridge’s Kubla Khan, but am presently unable to find it. However, to illustrate the power of a well delivered narrative I give you Burton’s short recital of the present tense of the verb ‘To Be’. He opined he felt it was ‘The greatest poem in the English language’.