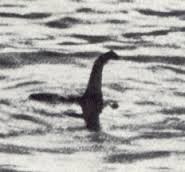 Twenty eight years ago today, a major sonar search for the Loch Ness monster was ceased. Operation Deepscan involved a flotilla of twenty four boats, using over £1 million of sonar equipment, to scan the loch searching for the legendary monster.

The legend of the monster dates back to the 6th century but it was not until the 1930s that the myth really took off. Most witnesses described the creature as having a long neck giving rise to the theory that there might be a prehistoric reptile – a plesiosaur – living in the lake.

The state of the art technology was introduced after the previous strategy of attempting to locate Nessie, with an old guy on the loch side shouting “Here Nessie, Nessie! Here girl!” failed to bear fruit.

The Inverness born old man, Arthur Cronin, had spent a decade utilising this flawed plan. He had sold this to fellow Nessie hunters as a viable strategy, on the basis it seemed to work when he summoned his dog Norman!……….. Quite why Norman responded to being called Nessie was a mystery!

Despite his optimism, Arthur didn’t get one sighting, although he did attract several dogs from the area called Nessie, as well as Norman of course!

Operation Deepscan superseded Mr Cronin’s idiotic plan. Hopes were high that a breakthrough would be made utilising the more scientific approach and technology available to project leader Adrian Shine and his team.

Arthur Cronin was hugely disappointed his approach to finding the monster had failed. However, on the plus side he went on to make a fortune from Norman the dog merchandising!

The X-16 sonar units Cronin’s team were using had a range of 1300ft and could target objects as small as 1ft and separate objects just 1in apart. Over the duration of the project scientists reported three large moving images picked up by sonar. 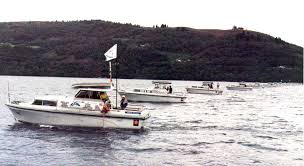 One indicated something big in the waters below Urquhart castle but this could have been a seal or a group of salmon. Nothing definitive was found to indicate the existence of Nessie.

Another large object picked up by the high tech equipment turned out to be TV presenter Richard Madeley’s ego, which was holidaying in the area at the time.

The third large image recorded turned out to be the wallet of the man with Nessie merchandising rights. It was moving at depth as the result of undercurrents within the 23 mile loch.

Much to the disappointment of the accumulated press and Nessie hunters, Operation Deepscan ended on 11th October 1987 without finding the elusive monster.

The newspapers tried to get project leader Adrian Shine’s opinion of his findings and whether he believed Nessie was in those deep waters somewhere! Unfortunately, he wasn’t available as he was too busy on the banks of Loch Ness shouting “Here Nessie, Nessie! Here girl!” with Arthur Cronin (and his dog Norman)!

One of the pictures captured by Operation Deepscan which may explain the mystery of whether Nessie exists or not. The authenticity of the picture has not been verified! 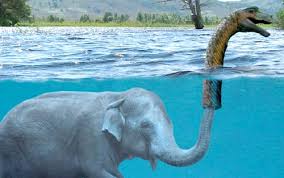