Whoever dishes out serendipity, be that god, karma, fate or astrologer Russell Grant, divine spirits have been good to me over recent days. Yesterday’s gravy, adding to the glee evoked by my footballing paramours winning the championship on Saturday, finding out that marmite deodorant/body spray is actually a thing!

The opinion dividing Vegemite spread now infusing a redolence manufactured by grooming product giant Unilever. Knowing how much I love marmite as a snack accompaniment, a friend yesterday presenting me with a spray can of this wonder of fragrant science.

Their gesture leading to such levels of giddiness, if I’d have been a dog my frenetic tail movements would possibly have taken on helicopter rotary blade proportions. Subsequently, manifesting in yours truly taking flight under the grey northern English skies.

Now, not only do I have a daily fix of marmite on my breakfast toast at reveiller, I’ve the enviable wherewithal to spend the day smelling like the world’s best toast spread rhyming with the word farmite……. Yes, I know there’s no such word as farmite, but I was really struggling to find an actual word which does rhyme.

Although, to be honest the bizarrely combined ‘Africa & Marmite’ infused scent bears little redolence of marmite. Never visiting the continent, I’ve no idea what Africa smells like, but it seems to overpower any hint of the Vegemite of kings and northern Englishmen. 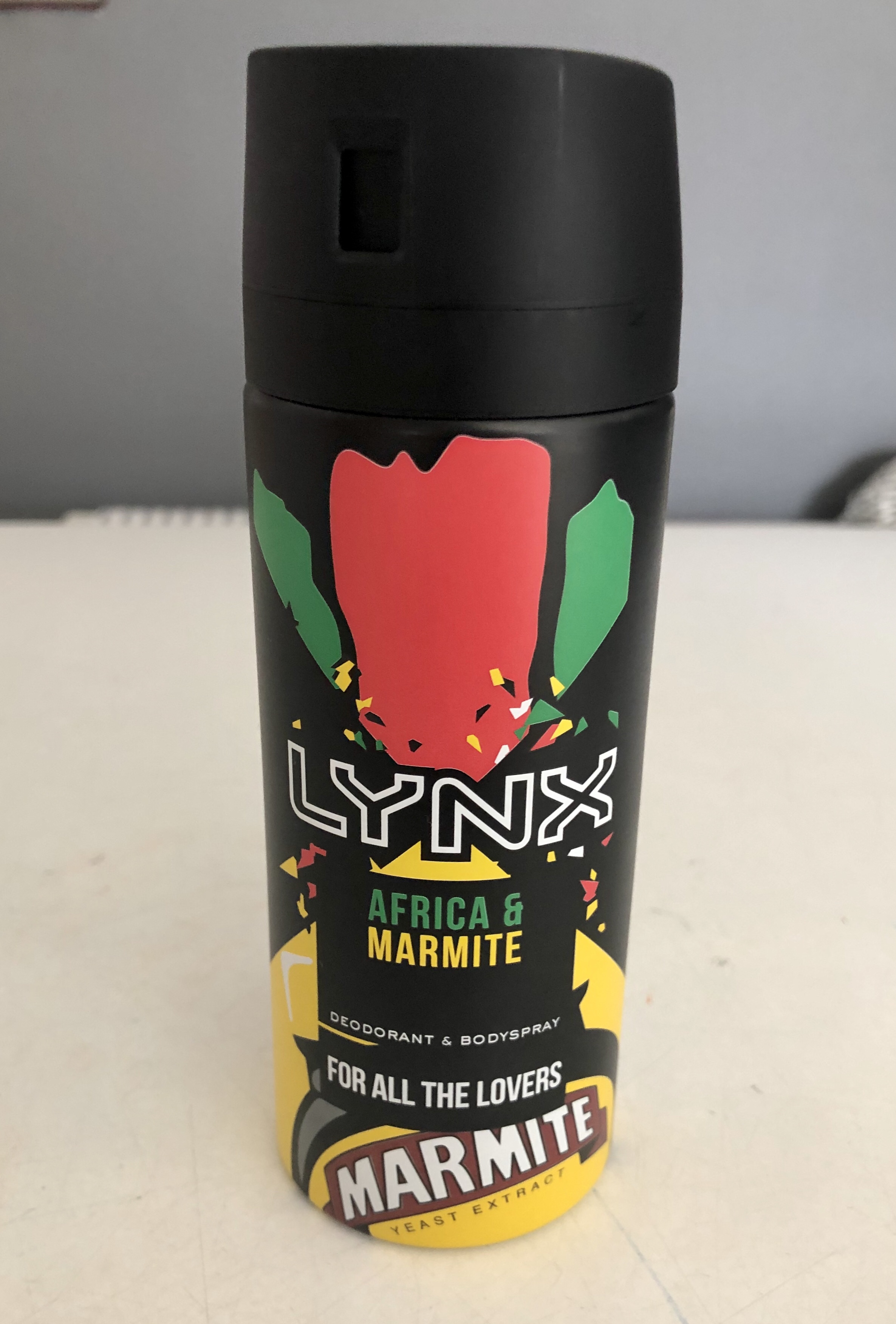 The bouquet of this body spray bears little obvious trace of marmite’s whiff. Although, that possibly explains why the musky, fresh scent is an appealing odour. After all, as much as I love the taste of it, there’s nothing overly engaging about its aroma. It’s not a an unpleasant smell, but who really wants to spent a good part of twenty hours each day smelling like their breakfast?

Off the top of my head, I can’t think of any favourite food flavours or tastes that I’d want to smell like throughout my waking hour. I adore a roast beef dinner, a good restaurant curry or a well produced homemade lasagna. However, I’ve no real desire to sport their particular fragrances while meandering aimlessly around the streets of Leeds….. Or, indeed, any other place.

Consequently, it’s not hard to conclude the products marketing is more gimmick than a forensically accurate reproduction of the spreads scent in spray can. As the old adage goes, ‘You can take a horse to water, but you can’t make him smell of marmite!…… Well, unless of course you smear Neddy in the Vegemite!’

Even gluttonous Australian competitive eater and marmite worshipper Mark Mywords, who once ate twelve jars of marmite in three minutes (including the jars!), has voiced reservations at whiffing of the spread over many hours. Famously once informing  a post eating competition press conference “Bbbbbbbuuuuuurrrrrrrpppppp!!”

What will be the next innovative gimmick from the marmite marketing team? Perhaps a pen with marmite ink; a writing aid with which the owner can pen romantic messages to a lovestruck beau. A love letter which once read the recipient can devour like a post-coital praying mantis would her mate.

Or maybe, borrowing from the highly successful chocolate fountains, how about a marmite fountain, in which we can submerge already buttered crumpled and toast, or even one’s head if feeling adventurous and in need of a challenging hair wash..

Anyhow, time to conclude this monologue. I’m in urgent need of a shower to rid myself of the ambience of Vegemite.