It’s Saturday morning and yours truly is seated within the open plan balcony coffee house in the White Rose Shopping Centre (WRSC), which’s become a habitual locale for these daily chronicles.

Through the glass barrier, which protects cafe patrons and me from plummeting 20 foot onto unsuspecting shoppers below, I witness a group of soldiers raising financial support for former soldiers and their families. Peddling furiously on two exercise bikes, it’s heartening to see that us civilians contributing magnanimously as they pass.

I’ll put a few quid in on my exit from the WRSC. As a fairly regular voluntary collector for cancer charities, I know how uplifting it is to receive these donations and I just stand holding a tin and flashing an appreciative smile. Not peddling for miles on immobile fitness equipment.

As these guys chase an imaginary peloton, clearly the soldiers camouflage trousers aren’t providing the stealth of their original design. If conflicts traditionally occurred in these architecturally designed retail outlets, as opposed to predominantly on natures terrain, I’d suggest these guys battlefield garb would require updating accordingly.

This contemporary new design allowing our forces to merge into the background by adorning a uniform bearing a collage of trainers, Holland & Barrett potion bottles and a big golden M logo. Franchise product placement on a retail outlet battlefield, if you will!

As I people watch, awaiting my next topic epiphany, a woman has just walked past looking so fatigued it looks like she might not reach her table destination without falling asleep. This lady who’s not an old woman (perhaps in her 40’s) looking in desperate need for a caffeine infusion from her beverage. I just hope she can get to her seat without a narcolepsy-esque incident resulting in spillage of the aforementioned coffee.

While people watching just now, I’ve concluded that attempting to gauge the emotion behind an individual’s facial expression isn’t always an easy task. For instance, there’s a woman about ten metres away to my left frequently scowling. A visage display which’d generally (I’d have thought) indicate displeasure, incredulity or distain.

However, she’s interspersing this facial demeanour with regular fits of laughter, indicating her mood is anything but an emotion of negativity or disenchantment.

Maybe in between her companion making her chortle, the grimaces manifest from her taking sips of Tabasco sauce induced coffee. The coffee doctored by the japester whose banter appears so adept at making her chuckle, when she wasn’t looking …… Who knows? And, more importantly, who cares?!

I’m feeling tired today. Not as fatigued as the lady I alluded to earlier who appeared to be afflicted by the onset of narcolepsy. Moreover, an overall feeling of lethargy, which has become a regular affliction of late. Perhaps, I need to try the Floradix potion advertised on the WRSC lift doors, a product I touched upon in yesterday’s narrative Maternal Laxity…….. This herbal tonic’s advertisement strap line questioning ‘Tired of being tired?’

To close, I’m going to relay the ‘hilarious’ visual gag that popped into my head a few seconds back. On hearing this crime of whimsy at best you’ll groan at it’s intended corniness, at worst you’ll feel moved to googling ‘Hitmen in Leeds area’!! 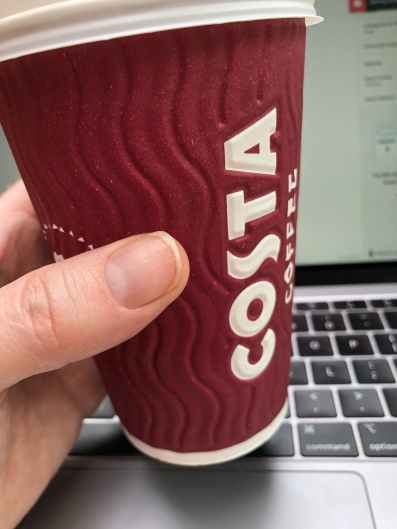