Last year, quite by accident I became aware of excerpts from the work of late philosopher/essayist Bertrand Russell. Knowledge I stumbled upon on during binge watching YouTube videos of thought-provoking advocacies delivered by individuals such as Stephen Fry, Christopher Hitchens, Richard Dawkins and Sam Harris.

In a compilation of celluloid lectures, where sitting engrossed at all four’s compelling debating style, I learned of a universal reverence borne by the quartet bore for the Welsh born social critic, who passed in 1970 at the age of 97.

Glowing accolades emanating from individuals who’s words I held in the same reverence as they did Russell’s. Locutions stirring notions of intrigue within GJ Strachan, feeding aspirations of filling this knowledge void; consequently, investigating what the 3rd Earl Russell had brought to the philosophical smorgasbord. 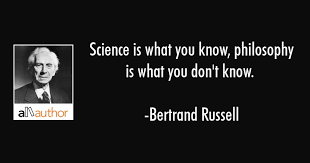 Via the medium of grainy black and white videos on YouTube, along with quotes sourced from the world wide of web (as late comedian/presenter Kenny Everett may’ve dubbed the WWW), I was exposed to a plethora of Russell’s philosophical pedagogies.

These words of oration and essay seeming sensible, erudite and thought-provoking advocations. Most incorporating sentiments to which I also subscribed. Examples of which below:-

“I would never die for my beliefs because I might be wrong.” – Yours truly agreeing wholeheartedly with this observation. It’s the reason I can never get too ‘het up’ over people’s politics or opinions, barring maybe feeling compelled to mutter “F***ing idiot!” under my breath when irked. Subsequently, if I don’t concur with someone’s opinions, I’ll agree to disagree with them. I hold absolutely no desire to embark on pointless heated confrontations over subjective notions where parties aren’t fully informed, or just too stupid to admit they maybe wrong. Experience has taught me, the stupider the person, the less chance there is of a disagreement being resolved satisfactorily.

“No one gossips about other people’s secret virtues.” – Russell’s advocacy touching on a big behavioural bugbear of mine. The fact human nature seems predominantly conditioned to seek out the bad in individuals at the expense of anything virtuous is an infuriating trait. For example, if people felt the need to discuss my behaviour, I’d wager more people would be more likely to mention my less virtuous acts than mention I’d undertaken over 50 instances of voluntary work for cancer charities. Tabloid newspapers sell millions of printed copies on the back of this prurient behavioural habit…… Or, is it just the case that I could be just being f***ing paranoid!!

“It is the preoccupation with possessions, more than anything else, that prevents us from living freely and nobly.” – I’ve written before about the folly of comfort buying and the short-term nature of the buzz  acquired from purchasing these goods. Fundamentally, we’re just animals who to survive only need food, water, shelter, protection from predators and the opportunity to procreate. To my mind, no car, house, gadget or any other purchase outside of the above necessities will bring long-term contentment…… Apart from maybe table football game Subbuteo!

“One of the symptoms of an approaching nervous breakdown is the belief that one’s work is terribly important.” – Following my vain-glorious observations in this narrative, maybe I’m on a path proving Russell’s conclusion and am hurtling ever faster towards a nervous breakdown!!!…… The chuffing clever s***e!!