Something for the Weekend, Sir?!

I’ve got a weekend home alone. Consequently, GJ Strachan will be spending a great deal of his time slobbing around the place in his undies armed with a pizza and a six pack of beer…… I just hope it’s not a lifestyle strategy which leads to me getting a lifetime ban from Tescos!!

One positive piece of news is that at least I’m now able to drive again. Consequently I now enjoy mobility which, following last Thursday’s stent insertion, hadn’t been available for most of this week. At this juncture, with my weekend plans currently a chaste canvas awaiting the inaugural brush strokes from a thus far creatively bereft artist, I’m unsure where my chariot (well, Vauxhall Astra) will lead me.

I’ll probably watch Saturday afternoon’s rugby league Challenge Cup final on TV. The game being contested by this season’s two best Super League teams, St Helens and Warrington. A mouthwatering prospect for the Rugby Football League’s annual showcase between two of Lancashire’s finest exponents of the sport – Near neighbours with a thirst for acquiring silverware every bit as insatiable as ‘Burglar to the Stars’ Blane David Nordahl***.

*** – A felon who targeted homes of wealthy individuals across the East Coast of America. Showing an exclusive interest in stealing silver, his ill gotten gains reportedly reached a value of around $3 million….. Incidentally, that’s the precious metal silver, not the Lone Ranger’s horse, which he was unable to pilfer due to logistical challenges……. He couldn’t  fit the horse in his swag bag!!

During my few days of solitude, I might also indulge in a binge watch of some boxset or other. Only time will tell whether that’ll be in the shape of my all-time favourite TV series The Sopranos, or a drama previously unsampled by yours truly like Emergency Room In The Sky****.

**** – Being bereft of a boxset show title that I’ve not witnessed, but aspire to watch, the latter drama name was fictional. So is XTC Murders in Gregtown which was my second choice for a made up boxset title.

I should really desist from my habitual re-watching of Tony Soprano family’s exploits, seeking instead to broaden my televisual horizons…… A prospective behavioural trait amendment which my OCD may’ve something to say about.

As an aside, the 34th self-published book, extracted from prose I’d written for my website writesaidfred.org, arrived this morning. Prose which, within it’s back cover blurb, I described as follows:-

The self-penned parody biography (or autobiography to be more accurate) on the back cover informed the reader of the following spoof facts about yours truly:-

Below are 25 of the 34 self-published books (printed by blookup) which I’ve written since March 2015. Extracted from 1600 essays/poems I penned for my website, the million plus words***** took me around 5000 man hours to create.

***** – It sometimes comes in handy having a partner who pastimes include random and time-consuming counting sessions!

The above literary achievement cocking-a-snook to all my high school teachers who’d relish advising me “You’ll never pen 1600 essays/poems incorporating a million plus words which’ll take you around 5000 man hours to create, Strachan!”…… Coming to think of it, no teacher (or indeed non-teacher) ever told me that. It’s fair to say, the specificity of the comment would surely rule out it’s use as a well-thought out lecturer’s prediction.

Anyhow, that’s where I stand with my chronicles of the everyday capricious life events thrown at yours truly. A labour of love containing an amalgam of fact, fiction, humour, drama and the darker episodes tainting an existence incorporating fights with depression, cardio vascular setbacks and a family member with incurable cancer.

Right, I’m going to bring this essay to a close as I’m going to watch my XTC Murders in Gregtown boxset……. Oh, hold on, I forgot I made that up!…… As you were!! 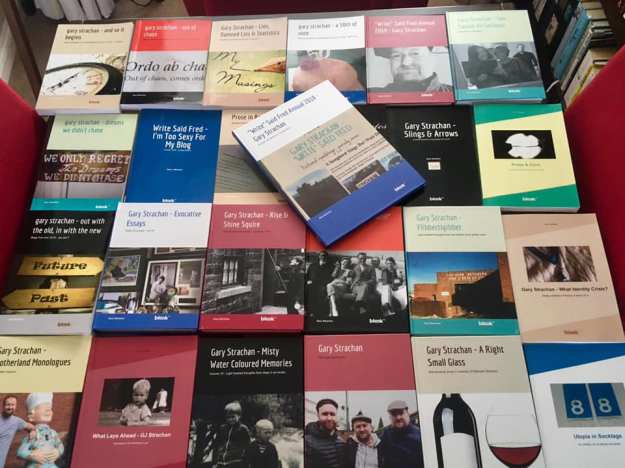