It’s midday on Wednesday and I’ve spent the last hour or so fitting an integrated fridge into our kitchen units. A job elongated by over cautiousness from never undertaking this type of task before; not to mention the onerous job of locating the necessary tools among the boxes of DIY detritus adorning my garage shelves.

If truth be told, my tool boxes have very few actual tools residing within their disordered  confines. There’s a plethora of screws, nuts, bolts, rusting hacksaw blades, more bits of plastic than resides in the Pacific Ocean and lots of odd shaped metal fittings whose purpose escapes me. Not only do I not know the latter’s use, but I’m also at a loss as to how and when they became tool box in situ.

Admittedly the screws, nuts and bolts will most likely come in useful at some juncture. God only knows, though, why I’ve kept the remainder of the other dross! Bric-a-brac I’m about as likely to use/reuse as I am to successfully secure a date with beautiful actress Margot Robbie. An highly unlikely scenario made even more unlikely by the restraining order.

Margot’s court-delivered edict spitefully negating my attempts at wooing her with wit, charm and my ability to speak and belch at the same time. Behavioural trait’s that no woman can resist, however in the event she can I’ll embark on Plan B – Shameful pleading.

If only Margs, as her close friends (and me) call her, would give yours truly a chance I’m sure my enchanting limerick that starts ‘There once was an actress from Regina…’ would weaken her stubborn resolve. Consequently unleashing her thus far suppressed yearnings for my company. Who knows, meeting me could be the catalyst to make her realise employing four attack hounds and shutting the blinds when she showers really aren’t necessary.

At this point, I’d like to make you aware, I’m not obsessed with Margot Robbie, or have I ever been the recipient of a restraining order. Additionally, I’d also like to make it clear I’d no part in last week’s navigation of the drone above her Bel Air swimming pool while she sunbathed. Something I’d proffer would’ve been impossible for me to undertake when her attack dogs had hold of all four of my limbs during the incident!! 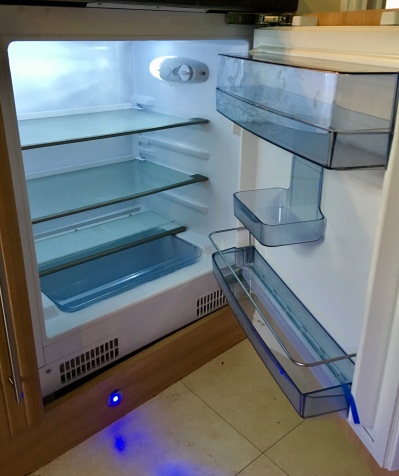 Anyhow, enough of the fictional nonsense about the most enchanting woman on celluloid. Back to the subject of my installation of the integrated fridge.

This new appliance purchased when last week my wife identified our refrigerator was no longer chilling food. In fact not only was it no longer emitting cool air, she claimed the white good’s interior appeared to be getting warmer. After ignoring my flippant response of “We might keep it as another oven then!”, Karen and me transferred the contents of stricken appliance into the fridge situated in our garage.

I was initially anxious at moving this perishable food into the garage fridge. This appliance ordinarily a place solely used for the chilling of beverages like beer and wine. My angst manifesting from pondering how my favourite chilled products would respond to an invasion of stricken kitchen fridges refugees? That being said, the alcoholic refreshments had little option but to cohabit in cramped conditions with short-lived comestibles; after all, it’s cousin in the kitchen was now pushing up the daisies…… Well leaning mournfully in pieces against the backdoor.

Fast forward to this morning and the delivery of a brand new integrated fridge. This the replacement of the appliance Karen identified as emitting heat as opposed to maintaining a chilling food environment.

As mentioned above, I’d never previously fitted an integrated fridge and initially was reticent to undertake the task. However, whilst purchasing the product online, the retailer highlighted they’d be a charge of £90 to fit the appliance on our behalf.

As a frugal Yorkshireman of roots, birth and most of my adult life the notion of parting with ’90 notes’ for something I’d probably be able to undertake was unthinkable. My thrifty uncle George would be spinning in his grave (or he would’ve if he was dead) if he knew I’d shelled out just short of a ton for someone to fit a fridge.

Consequently, I bit the bullet and decided to take on ‘Project Fridge in Kitchen Unit After I Removed The Old One’ *** myself. A decision that paid off when the chiller was successfully fitted without hitch….. Well, apart from losing two teeth when I bit the bullet!

*** – I was never much good at thinking of short, snappy project names!!

On conclusion of the fitting, Karen washed out the new appliance and it’s now switched on ready to segregate the perishable food from the beverages in the garage fridge. Prior to transporting them into their spick and span home of the brand spanking new Strachan kitchen fridge. This new abode complete with an impressive 131 litres of storage capacity, an A+ energy rating and fetching egg and dairy compartments.

Bloody hell, I’m starting to recollect fridge storage and energy specifications!!!….. God, I need to get out more!!

It’s a beautifully sunny day in ‘God’s Own Country’. With the surreality of living under COVID’s watch, witnessing clips of the election campaign reality show across the pond, along with […]

Return of The Prodigal Sun

It’s back!!…. The prodigal sun has returned to Yorkshire. Kill the fatted calf, ignite the spit roast coals (well, bbq briquettes), replenish your ever depleting vitamin D levels and rejoice! […]
%d bloggers like this: