I learned many useful life lessons as a child growing up in Low Fell, Gateshead. Amongst them was when it came to playing table football games my brother Ian was a flaming cheat.

Our kid will have his own version of these events, but will never convince me he flicked the small plastic player to ‘kick’ the giant football, which was clearly stipulated within the rules of the game. Instead he chose the easier and more directionally accurate option of shuffling the mini footballer with the outside of his index finger.

For the uninitiated, a Subbuteo game included a 3ft x 2ft green baize pitch, 20 tiny plastic players on self-righting disc shaped bases, two stretching goalkeepers on plastic batons and a football. If you were that way inclined, there was also a multitude of extras you could acquire to enhance the realism, such as terracing, a scoreboard and a mini sheepskin coat clad match reporter.

It was a game possessed by most lads between the ages of 7-12 in the 1970s. My brother, friends and I spent many happy hours attempting to recreate the previous weekends real life football action. These table top matches a kind of gladiatorial homage to our footballing heroes, including Leeds United’s Allan Clarke, Billy Bremner, Eddie Gray and Peter Lorimer; or Malcolm MacDonald and Billy Hughes if the participants were Newcastle/Sunderland fans.

As a tribute to Leeds’ perennial substitute Mick Bates, occasionally we even perched an Action Man at the side on a makeshift bench of stacked Shoot annuals. It wasn’t overly realistic, after all in real life Bates wasn’t twelve times bigger than the rest of his colleagues in white. However, his presence allowed the tense-breaking levity of intermittent orders of  “Best get warmed up, Mick!” to the giant substitute on the sidelines.

To add further ‘realism’ to our games, I developed a way of making football crowd noises, where I threw my voice to sound like chanting from paying punters. Avoiding the ruder chants, along with one’s I was unsure what they meant. I occasionally threw in a “Flipping rubbish, Leeds!…. Get Bates on, Revie!” in my unwavering desire to replicate the experience of a real football match.

In fact, to be honest, I never shut up throughout a game of Subbuteo. When I wasn’t making crowd noises, or pretending to be an irate fan asking for Mick Bates to replace an off-colour Johnny Giles in midfield, I was commentating.

I couldn’t play this table top soccer game without me nattering the various cliches I’d often heard emanate from the mouths of BBC TV football commentators David Coleman or Barry Davies. At that time, it would have been unthinkable not to shout “Clarke, one-nil!” after my striker had planted the ball in the net with his usual clinical finishing.

As the players were too small for numbers, I’m not sure how I differentiated between them during commentary. Although some did stand out, such as Peter Lorimer. He was easily recognisable as he had glue on his legs, where the physio (our Ian) had stuck the base back to the body after he’d inadvertently knelt on the Scottish international. 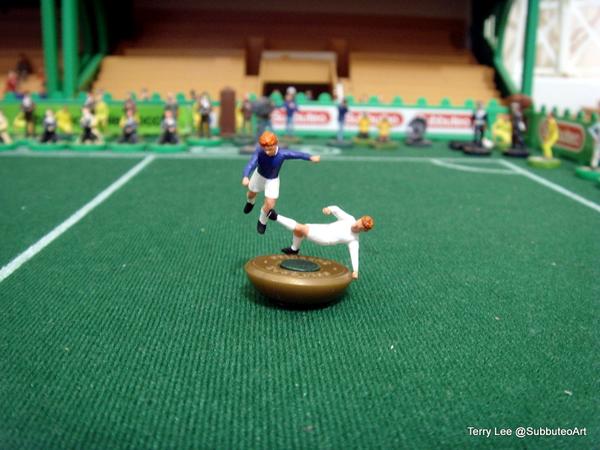 While Lorimer was off, I was going to bring Mick Bates on, but thought the logistics of having a player that large would have diminished the fun of the game. After all, have you ever tried to flick an Action Man in the direction of a small plastic football?!

I’d have probably broken my index finger; an injury that would have raised a few eyebrows at the Queen Elizabeth hospital Accident & Emergency unit. I can imagine my mum’s initial conversation with medical staff now:-

Nurse – “How did your son manage to injury himself, Mrs Strachan?”

My mum (sheepishly) – “Erm…… Trying to flick Mick Bates towards a football, nurse….. Mick was on as sub because my other son had knelt on Peter Lorimer!”

Another of my Subbuteo team that was immediately recognisable was utility player Paul Madeley who, unlike his ramrod straight gait in real life, was bent forward like an in-flight 90 metre ski jumper. That minor injury was sustained when I threw him in anger after he missed an easy goal scoring opportunity when one on one with Ipswich goalkeeper Laurie Sivell.

Madeley hit a sofa cushion after I threw him, so thankfully his injuries weren’t too severe. Subsequently, I was mightily relieved when he managed to play a few days later against Stoke City, following a cortisone injection…… God only knows where our Ian got the cortisone from or how he managed to inject it in a one inch high plastic footballer!!

At the start of this narrative I accused my brother of shuffling his players when playing Subbuteo, which I still stand by. However, if truth be told, all of our peers were equally guilty of this board game malpractice.

I recall these table top football matches against family and friends with great fondness. Well apart from the one game when our Ian advised me “For flips sake will you stop making those flipping crowd noises, Gaz!”***….. This jibe lead to more 1970s football realism in the shape of a fistfight similar to the 1973 on-field punch up between Leeds’ Norman Hunter and Derby County’s Francis Lee.