In the last couple of weeks I’ve posted a number of my narratives onto two Facebook groups whose members have links to my childhood home, Low Fell in Gateshead.

These pieces of prose a selection of newly penned and previously written recollections from childhood. Partly factually/partly fictional, their publication was driven by my desire to paint a whimsical insight into growing up in 1970’s Gateshead.

These yarns have led to several old friends/acquaintances getting in touch, not to mention positive feedback from some well-meaning individuals I didn’t know. One of the latter group recently informing me they were in my brother Ian’s class at Oakfield Junior School. Mentioning she remembers him having the nickname Cheese, or Cheesy.

With this in mind, I thought I’d share a blog written by yours truly last August about how Ian Strachan’s lifelong nickname came to pass. The narrative going as follows:-

Yesterday, I became embroiled in a discussion about nicknames with my wife Karen and her sister Sue, during which my spouse raised the origins of my brother Ian’s longstanding nom d’plume of Cheese. A moniker I coined for our kid in the mid 1970’s after growing tired of the previous incumbent ‘E’.

During the conversation my spouse felt moved to opine how woeful the nickname of ‘E’ (short for his name, pronounced E-an) was from a creativity perspective.

Agreeing with Karen’s sentiments, I gave myself a good talking to regarding the lack of childhood creativity shown during introduction of the nickname ‘E’……  Sadly, I undertook this conversation in Russian, meaning I’d no idea what the admonishment entailed.***.

*** – I know that doesn’t make sense; however, what are we without the blessed wild card of artistic licence?….. I’ll tell you, mere pawns in the chess game of life, hamstrung by the parameters in which we’re expected to exist. Shackled by conformity, adherence to the mainstream and negation of being able to write down any old b*ll*cks. 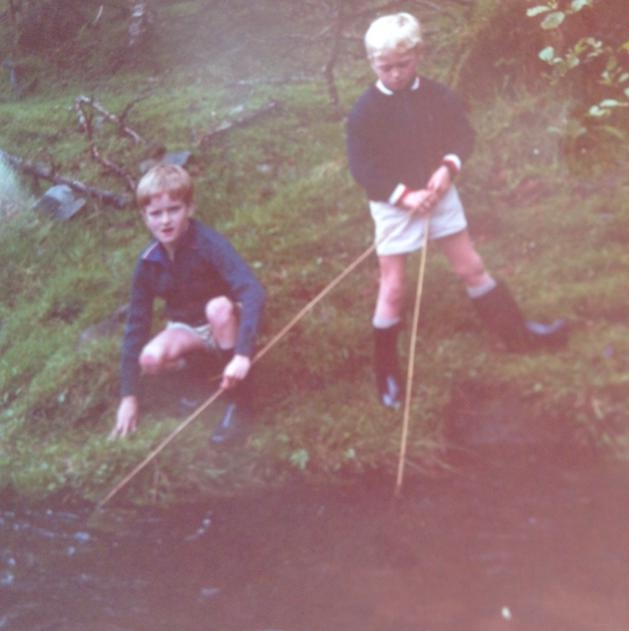 The photograph above was snapped around the period when our Ian’s nickname of Cheese commenced it’s evolution. A time when I introduced the inaugural prototype moniker of Edam – A title I gave him as it was an extension of ‘E’, also partly inspired by the fact he bore a mane of white hair similar in colour to the Dutch cheese.

In the fledgling weeks of Edam, I was reasonably contented with the new name bequeathed to my younger sibling; something he seemed to also embrace. Being capricious of nature, though, after a few weeks I grew bored of the pseudonym. A feeling possibly exacerbated by the fact no one among our group of friends had seen fit to adopt it .

With this in mind Edam was revamped, with a consequence of our Ian/E/Edam (delete where applicable) being given the new title of Edam Cheesehead. Admittedly, a less slick brand name for Ian Strachan. However, I was prepared to risk criticism for introducing additional syllables as I felt the nom d’plume reflected more on his trademark white bonce. After all, his mop of brilliant white hair, almost albino-esque in appearance, was Ian’s calling card.

The two worded title may have been more of a mouthful, but I felt suffixing Edam with the word Cheesehead gave it potential to organically evolve into a nickname people would eventually adopt.

After a short period of using this silly moniker, though, I’d begun to hold reservations. Deeming the two name title to require further tweaking prior to rolling it out to the discerning masses on Oakfield Junior School’s playground. Consequently, I shed the Edam element of my sibling’s pseudonym to now address him as just Cheesehead.

It was at this point of the nickname’s evolution where small numbers of friends began adopting the title to address our kid.

However, I still thought the name wasn’t quite where it needed to be to achieve the longevity I sought for Strachan junior’s pseudonym. Feeling I needed to reduce the syllables in Cheesehead, I’d concluded the nickname needed to shrink by revamping it to Cheese or Head.

Deeming Head to be a ridiculous alternative moniker with little chance of being adopted, Cheese was born….. Well, the nickname was. My brother’s birth was around nine years earlier.

From that day in the early/mid 1970’s, the majority of friends, family, teachers and acquaintances have chosen to address my brother as Cheese, or slight variations such as  Cheesy.

As young project manager for the creation of this spanking new nickname, I was delighted by it’s success. In particular it’s implementation within budget and with few setbacks; apart from perhaps the requirement of more tweaks than I’d have liked. Predominantly the result of my poor research and User Acceptance Testing (UAT).

Over forty years on, our kid still gets addressed as Cheese by his peers. With the exception of strangers, there’s few who don’t address him by his nickname in preference to Ian.

The only people who won’t countenance using his alternative moniker are members of the ‘Pelaw Refusal to Call Anyone Cheese Society’ (PRCACS)…… Oh, and me!……. I very rarely utilise the nickname, bizarrely re-adopting the title of ‘E’ for my sibling. The very name I deemed unfit for purpose and abandoned over four decades ago.

Before I close, yesterday’s nickname discussion with my wife and her sister unearthed some interesting news about my wife’s current circle of friends. In particular, how they counter the fact lots of them possess the name Jean.

As a an ‘ingenious’ strategy to help them differentiate, the friends use different nicknames for all the Jeans. Subsequently, the ladies in question are know in the group as ‘Little Jean’, ‘Medium Sized Jean’, ‘Tall Jean’, ‘Even Taller Jean’, ‘Ginger Jean’ and ‘Posh Jean’.

What intrigued me about the nicknames was learning ‘Little Jean’ is taller than ‘Medium Sized Jean’. Not to mention the bizarre fact ‘Tall Jean’ is the same height as ‘Even Taller Jean’.

I was also interested to note there’s a ‘Ginger Jean’ and a ‘Posh Jean’. Sadly, though, in the absence of ‘Sporty Jean’, ‘Scary Jean’ and ‘Baby Jean’ my hopes of a Middle-Aged Spice Girl tribute band died a death.

What was Cheesy boy’s nickname for his older brother? Well he shortened Gary to Gaz. A move that can be deemed as lazy, creatively inept, or more likely that he just isn’t as big an idiot as me!