A minor wish on the Gary Strachan bucket list was fulfilled yesterday. It didn’t provide the adrenalin rush of a zip wire ride, or the aesthetic beauty of an Alaska cruise, nevertheless it’s an ornate possession I’ve coveted for a while.

The fulfilment of this ambition was quite simply the acquisition of a globe, at John Lewis’ in Leeds. To clarify, the globe could have been purchased from any store; I didn’t specifically stipulate on the bucket list that it had to be procured from John Lewis’ in Leeds!

Some may say the inclusion in a bucket list of owning a spherical scale model of the Earth displays limited aspirations on my part. They might opine that surely I’m hoping my bedfellows are greater existential memories than owning a globe while I lay dribbling on my death bed.

It may well be interpreted by others that I’m an unambitious man. A chap easily fulfilled; acquiring contentment cheaply in the possession of ornaments that don’t bring any kudos, value and are unlikely to be part of any legacy I leave my offspring……. There are those, though, who’ll exclaim “Chuffing hell, a globe!… You lucky b*****d, Gary!”…… Or maybe not. 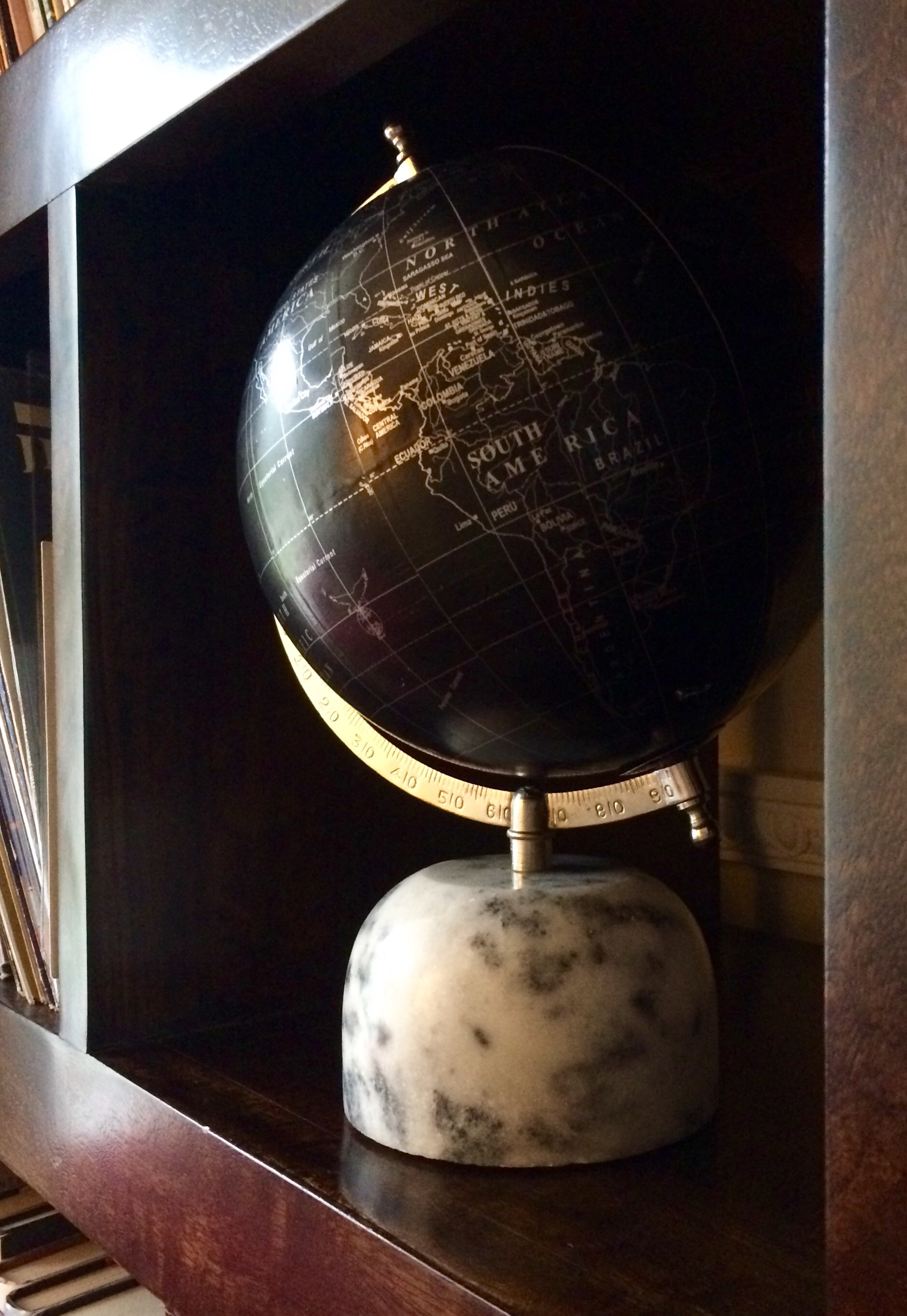 I’m not sure what has driven this long-standing desire to own an ornamental globe. After all, in all likelihood it is something that, apart from the occasional spin, will perch inanimately in my book case bereft of any sustained attention.

Additionally, I can’t see me poring over my latest purchase with a view of filling geographical education voids. I already possess the knowledge of it’s high level detail, such as the locations of the continents, oceans and numerous countries.

Any geographical information that I don’t possess  I’d be more inclined to acquire by internet search engine or my car’s GPS. For instance, if I get asked in a pub quiz ‘In which English county does the village of Great Griswald reside?’ I’m unlikely to rush home for my globe to find the answer.

If I’m going to cheat, I’d do so surreptitiously via an internet browser on my mobile phone. I’d venture having a 15 inch globe on my team’s pub table couldn’t be classed as a subtle cheating strategy.

Another glaringly obvious reason I wouldn’t use my new buy to find out ‘In which English county does the village of Great Griswald reside?’ is the globe’s content isn’t granular enough to include English villages.

Subsequently, to locate Little Muffington, Scrotwald or High Highton you’re going to need the assistance of a search engine….. Although, as they are fictional village names, I suspect even google won’t be able to help in this instance.

“What other low aspirational wishes sit idly on your bucket list, Gary?”, I hear you cry.

Scanning my list now, neatly written on an old beer mat I store in the oven, I can see at some point I coveted a coat made of cheese. It doesn’t say the type of cheese, but if I had the choice I’d probably plump for edam or Jarlsberg, which would be harder wearing than the softer cheeses.

Incidentally, I haven’t climbed into the oven to read the list. I took the beer mat out as last time I attempted that manoeuvre I got stuck. Embarrassingly, this resulted in my wife Karen having to baste me in WD40 to help regain my liberty.

Looking further down my bucket list I can see that once upon a time I had a desire to climb into the oven….. I best scratch that from my beer coaster of aspiration.

The wish below that has been slightly obscured by a beer stain, but I think it says I wanted to be basted in WD40 after getting stuck in the oven….. That’s another coveted act I can strikethrough.

Right, I’m off to spin my new globe around really fast and see which place my finger points to when it stops……. Bloody hell, Great Griswald is on there!