Its 08.09 am on Monday 10th October. As I start to pen this blog my long suffering, courageous wife and I reside in a waiting area of one of Europe’s top oncological institutes.

The dwindling West Yorkshire temperatures outside bring with them the first autumnal sightings of neck scarves, gloves and survivalist Bear Grylls. It’s unusual to see the adventurer in the Burmantofts area of Leeds.

Bear’s a very brave guy, but he does have boundaries into the foolhardiness he’ll undertake during his adventures. The Northern Ireland born survival expert would generally advocate wandering around Burmantofts is a step too far from a danger aspect!

In between the penning of inanity, I’m indulging in a spot of people watching. I know it can be an invasion of a person’s privacy. However people watching is the UK’s second biggest spectator sport, after gawping at freaks on TV ‘talent’ show Britain’s Got Talent.

That being said, though, there is a consensus of opinion between my many personalities, that there is absolutely nothing gratifying about watching people in this environment. Amalgamate the fact it’s an early Monday morning, alongside being in the company of some very poorly individuals and a heady brew of melancholy prevails.

As I write this, It’s now 08.18 am. My wife Karen has a just gone for a blood test; a prerequisite to her monthly treatment tomorrow. I watch her figure ever diminishing in height as she walks away from me along a seemingly endless corridor. A passageway she shuffles along as she heads towards the blood testing section.

Eventually, my stoic spouse, now a mere dot in the distance, finally arrives at the blood testing room. Unconcerned by the close attendance of vampires, she sits calmly with her gaze straight ahead. Her only engagement with other patients being an exchange of smiles with a woman adorning a necklace of garlic cloves.

Ten minutes later a distant figure, who I identified as Karen, gradually increases in stature as she walked towards me along the lengthy passageway. Thankfully it is flat, as an incline would bring with it unwanted exertion for the Birtley lass.

Meanwhile, I was sat with my laptop, white of colour and latent of response……. Incidentally, that’s the laptop not me…… Although then again!

Shortly after 08.30 am, Karen and I were summoned into a consultation by a professor of oncology.As she heads purposefully towards the consultation room, my missus clad in a poncho she procured at Spitalfields market in London, resembles a character from the movie The Good, The Bad & The Ugly. 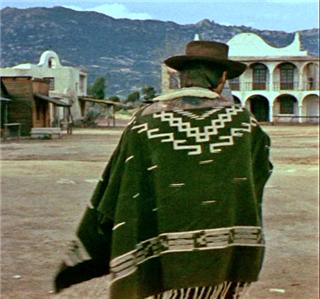 My diminutive spouses’ likeness to a spaghetti western gun slinger further enhanced by her entrance on horseback, the cries of yeehaw and her indiscriminate gunfire into the air.

Despite being covered in dust from shot out ceiling tiles, we had an engaging chat with her consultant oncologist, during which time he delivered good and bad news. The positive statement being Karen’s tumours remain stable; with the negative message us being asked to clean the manure deposited by Karen’s horse in the waiting room earlier.

We left the oncology institute just after 09.00 am in possession of the heartening news that Karen’s condition remains stable. She suffers from lots of sporadic physical aches and pains; not to mention enduring mental challenges on this thus far 6 year fight. However the situation remains that of a best case scenario, something we should embrace positively.

I remain in awe of this wee north eastern lady’s resilience and fight. Her stoicism and bravery are inspirational!……… I just wish she wouldn’t let the horse sleep in our room!