Thoughts of fond sporting memories past were ignited yesterday on hearing of the passing of legendary US golfer Arnold Palmer. Although sad news, a collage of fond childhood memories of 1970’s sport were rekindled by word of the man nicknamed The King’s death.

As I mulled over this sad news to the background of nostalgic recollections, it dawned on me that not only did I know very little about the winner of 7 majors and numerous other achievements tournaments, golf in that era is a sport of which I retain few memories.

The only details I could recall about the sport is some monochrome footage of Tony Jacklin putting to win one of the Majors, a blond of mane Jack Nicklaus striding towards the 18th green during his British Open victory in 1970 and remembering thinking Oosterhuis was an unusual name.

Despite a dearth of memories of 1970’s golf, this young fair haired northern lad does retain a reasonable amount of sporting knowledge from era.

I would spend as much time as possible when not at school or playing football/cricket and kneeling on Subbuteo players, taking in as much live or highlighted sporting action as possible.

The picture quality might not have been the best at that time, particularly as until we upgraded to colour in 1973 our semi-detached living room was graced by a TV set rendering grainy monochrome TV pictures.

It didn’t matter to us, though, as we knew nothing different. If we regressed from broadcasting technology now back 40 years we might complain.

Although if we were watching the likes of Ali, Best, Pele, Barry John, Spinks and Cruyff in their prime, I’m pretty sure we’d put up with having to watch it on a grainy black and white picture. It was a picture that rotated vertically on occasion, that took a remedial slap on the TV set to resolve.

The commentators made such an impression that when we played Subbuteo table football we’d copy Barry Davies and David Coleman’s inimitable style of describing the events on the green baize pitch in front of us.

On one occasion, the mimicking by us young boys was taken a step too far, when my brother Ian donned dad’s sheepskin coat (as commentators did then) to add extra authenticity. It backfired badly as the coat hindered our Ian’s field of vision, resulting in him kneeling on more of the little plastic players than normal. 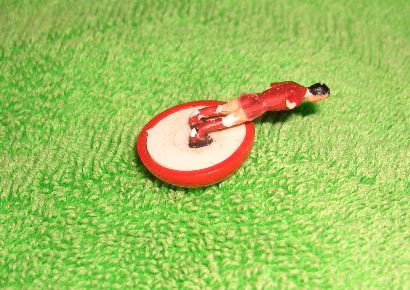 To clarify when is say above ‘donned dad’s sheepskin coat (as commentators did then)’ I meant Ian was copying the commentators attire, not that Barry Davies and David Coleman borrowed our dad’s coat on a cold night at Elland Road.

Copying is what you do as kids. At that age, I could regularly be spotted playing football, blue number 8 sock tags blowing in the breeze, sleeves of my white Leeds kit pulled over my hands like my hero, Leeds striker, Allan Clarke.

My slight frame, similar to the lithe Clarke, added authenticity, as did running with one arm in the air if I scored.

However, I soon learned as a 8 year old not to mimic everything our heroes did, after being hauled into the house by my mum for utilising a “naughty” ord that rhymes with duck, which I’d lip read on a televised match.

They were all names that rolled off the tongue of my peers and me in that era….With the exception of Tomaszewski, whose name takes some luring from the tongue. Generally you have to entice it with the promise of a Toffee Crisp and a can of Tizer.

All those names didn’t all bring a young G. Strachan joy. As a Leeds and England fan, West German footballers Gerd Muller and Franz Beckenbaur, in particular, caused me a few destressing evenings in that decade.

Another black night in 1973 when Polish goalkeeper Tomaszewski also darkened the English spirits when he almost singlehandedly denied England a victory, robbing them of a place in the 1974 World Cup Finals.

I may have sparse memories of golf from the 1970’s, however, I do recall my brother Ian and I spending hours playing this game which was a Christmas present around that time.

US writer Mark Twain once said of golf that it was a good walk spoiled. Well I’m pretty sure Arnold Palmer, the first sporting superstar of the TV era, would beg to differ.

I would proffer that in his prime, Palmer’s good walks would have been highly fulfilling for not just the Pennsylvania born golf legend, but also millions of sports fans.