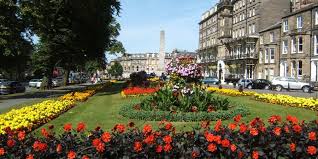 Yesterday, my wife and I took the No.36 Ripon bus from Leeds, journeying to the charming North Yorkshire spa town of Harrogate.

For a public transport bus, it was clean with comfortable seats. It’s facilities encompassed wifi and USB access; in addition to each stop being announced via auto message by BBC Look North presenter Harry Gration…… That’s what I call luxury travel!

I’d never been so pampered on a bus journey before……. Unless you count the cheese and wine party on the No.19 to Garforth a few years back….. Or indeed the lobster and claret get together on the No.166 to Castleford in 1999….. Or indeed the recent massage on the 163 into Leeds (although I can’t elaborate on that until after the court case).

As Harry’s assuring Yorkshire tones announced we had reached Montpelier Hill close to the centre of the spa town, my diminutive wife and I alighted the bus.

We were greeted with bright sunshine and the sound of a confused old woman behind us asking her friend “I wonder where Harry Gration was? I couldn’t see him anywhere!” Her equally misguided friend replied she suspected he was hiding under the bonnet.

While walking past its elegant Georgian structures, spa buildings, the original Betty’s café along with the aesthetically beautiful Valley Gardens I couldn’t help but think to myself “Bloody hell, there is a 2 for 1 yoghurt offer at Asda!”

Seriously though, on each occasion I visit the enchanting town, I can fully understand how in recent years it has consistently achieved the accolade of being the ‘happiest place to live’ in England….. I’d certainly be happy living here, which is some achievement I tell you!

Historically, this citadel’s profile and size arose after the merging of the hamlets of High Harrogate and Low Harrogate.

To confuse potential invaders at the time, High Harrogate was on lower ground than Low Harrogate. For additional security, both hamlets could only be entered by stating a secret password.

This turned out to be highly effective at mitigating against invasion, apart from the day an errant group of Normans guessed the password of ‘Z123!mKlO564‘ and the dwellers of these hamlets had no choice but to let them in!…… This resulted in the imprisonment of the security head for making the password too easy!

By 1700, Harrogate was well established as a Spa and doctors had produced leaflets about the qualities of the waters.

As I mentioned earlier, this pleasant part of North Yorkshire is a dormitory town, which is predominantly home to individuals of affluence. A section of whom commute to the large legal and financial hub in the nearby city of Leeds.

The level of this affluence was brought home as Karen and I ate lunch, when the little fella below perched within a foot of us on our park bench. 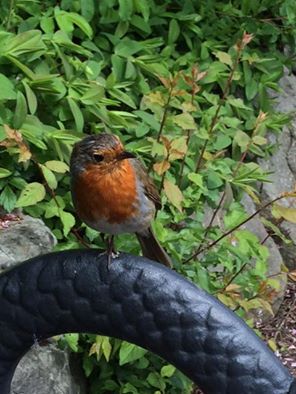 There are none of your pigeons scrounging for food in Harrogate’s Valley Gardens park. They have an altogether better class of scavenger…….. Incidentally, if you’re ever stuck what to feed a robin they seem to like egg & tomato sandwiches….. Well the bread bit anyway.

They say that ‘beauty is in the eye of Noddy Holder’ (or is that beholder?). That being the case, I’m sure the front man of 1970’s pop band Slade would class Valley Gardens as ‘bostin’!***

Karen and I then spent a leisurely couple of hours in the park, where we sat on a bench with a Ripley ice cream and indigestion watching the world go by.

During my time of self indulgent inertia I pondered over many aimless, unimportant thoughts. Random questions entered my erratic mind, such as if robins liked kebabs, as is the want of their pigeon cousins. Or would they only partake in indulging on this delicacy after a few beer’s in The Montpelier pub?

We then ventured to the original, highly acclaimed Betty’s café/shop where I purchased a highly agreeable stem ginger cake, following which we headed to the bus station for our journey back to Leeds.

As we pulled out of Harrogate bus station heading towards the A61 south,  I looked out of the window with a touch of melancholy. This the result of leaving a town that never fails to enchant. Not to mention I’d flipping lost the robin’s Facebook address!

As we reached the Pannal area, for some reason Karen started teaching me some details about Harrogate’s motto of ‘Arx celebris fontibus’.  My wee spouse informed me that the Latin phrase had an English translation of ‘Try the Betty’s stem ginger cake. It’s lovely’

Not wishing to be disparaging, but I suspect the translation I recently learned from an erudite acquaintance, ‘a citadel famous for its springs’, is probably more accurate.

So, red of face from the sun, we bode au revoir to the citadel famous for its springs. Hopefully, we’ll be back to sample its wares in the not too distant future.

With a bit of luck I’ll remember my sun screen next time!…… By the way, does anyone have any after sun cream I can borrow?! 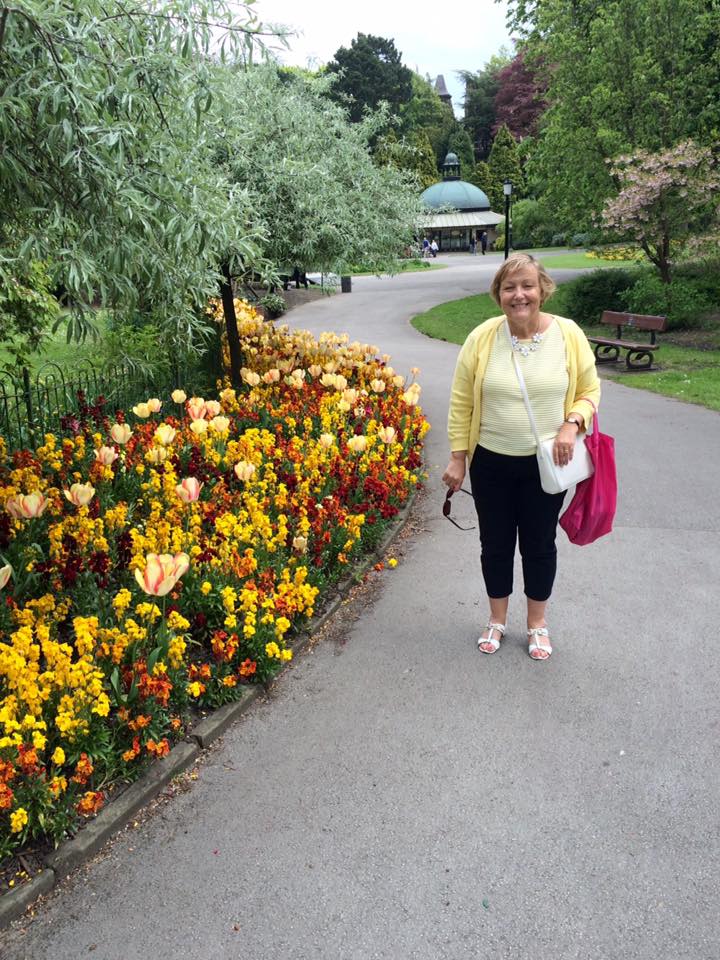 *** Noddy Holder is from the West Midlands where an element of the populous utilise the word ‘bostin’ to describe something that is very impressive….. Coincidentally (or perhaps not), these people use the same word to describe the US east coast state capital of Massachusetts.